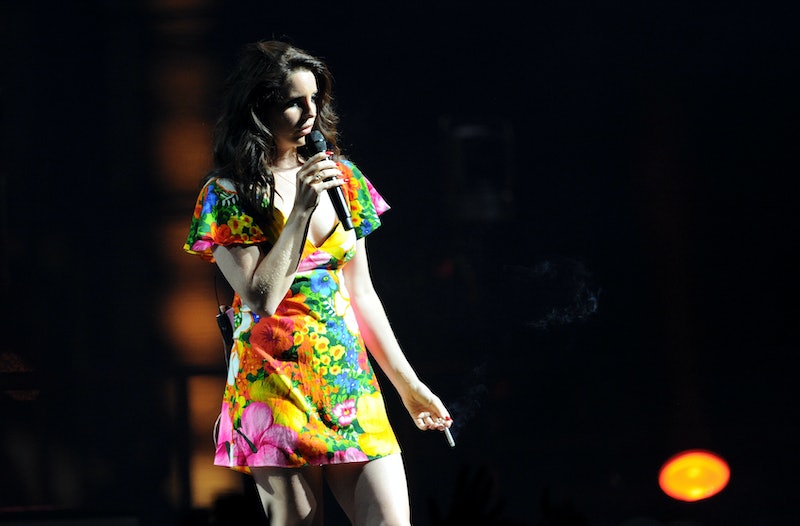 There are a lot of strange things about anti-feminist sentiments coming from the mouths of women, but perhaps the most perplexing part of it is how women can distance themselves from feminism while still embodying or endorsing a feminist ideal. The best example of that these days is Shailene Woodley and her misunderstanding of feminism that has caused her to clarify and re-clarify her views a couple of times now. Joining her on this confusing campaign is another powerful woman: Lana Del Rey admits the concept of feminism bores her.

"For me, the issue of feminism is just not an interesting concept..." said Del Rey in an interview with Fader magazine. "Whenever people bring up feminism, I'm like, god. I'm just not really that interested. I'm more interested in, you know, SpaceX and Tesla, what's going to happen with our intergalactic possibilities."

There are a lot of problematic things inherent in Del Rey's statement, but the biggest part is her denouncement of feminism as an uninteresting concept. The idea that men and women should be equal is uninteresting? The idea that men and women are both people with the right to be treated as such is uninteresting? That entire concept is the foundation that allowed Del Rey to have a career, especially one that flourishes as much as hers has, and her lack of appreciation for it is truly disappointing.

Perhaps Del Rey meant to say that she's uninterested in the ongoing activism for the advancement of women's rights. Later in the same interview, she defines a feminist as "a woman who feels free enough to do whatever she wants", which says something about her conception of women. In Del Rey's definition, it seems to be entirely up to the woman to be able to do whatever she wants, which doesn't leave much room to acknowledge that prejudice, stereotypes, and societal constructs often prevent women from feeling very free at all.

The fact that Del Rey thinks that one can't be a "true feminist" if one doesn't feel free to do anything — which, ironically, would mean that by her definition she is a true feminist — shows a misunderstanding of the concept of feminism that makes her statement a little more understandable. It seems that just like Shailene Woodley has denounced feminism while constantly saying feminist things, so too is Del Rey dismissing feminism based on some confusion of what the movement is about.

So while it's disappointing to hear an icon like Lana Del Rey turn her back on feminism, it's a lot easier to understand once we acknowledge that there are a lot of lingering misconceptions about what feminism is and a lasting stigma that remains. Perhaps embodying feminist ideals in all but name is the new acceptable compromise for advancing women in the modern century, but, even if that's true, it would be nice if celebrities stopped shying away from the f-word.