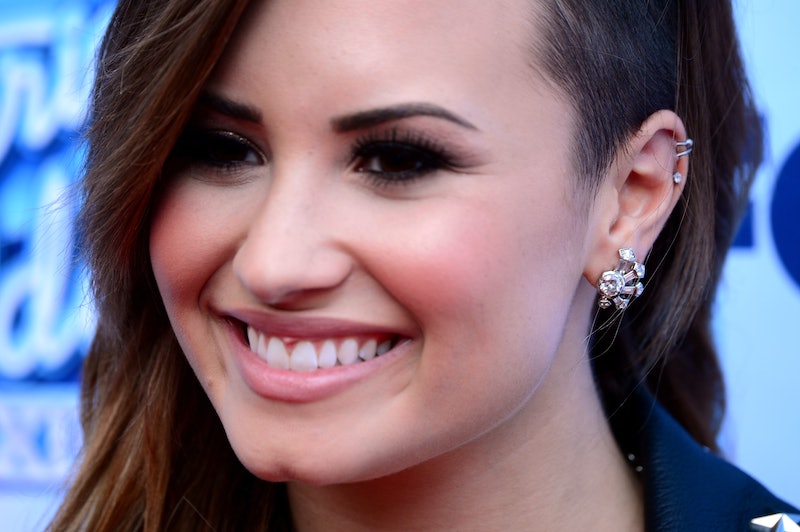 Demi Lovato sings about giving her heart a break in one of her biggest hits, but one thing the pop diva isn't giving a break to is her hair. Unless, of course, you consider the breakage and split ends she likely deals with, thanks to all the chemical processing her locks endure. Lovato went back to dark brown earlier this year, after a hot pink stint, but that didn't last. She's a true hair chameleon who specializes in colors not found in nature. Her latest shade? A purple — more like lavender—and silver ombre mix. While blue is waaay popular this summer, that shade is so late 2013 for Lovato. The girl has moved on and to her credit, this hybrid is warm weather apropos.

Let's hope she (or her stylist) slathers on a thick, rich, deep conditioner because all of that processing kills strands.

Anyway, it's obvious that Lovato is obsessed with changing her hair. It's like she can't commit to a —gasp! — "boring" or "regular girl" color. It's as though some unseen force is compelling Lovato to swap shades as often as possible. But thankfully she has a glam squad at her disposal to shepherd the transition without making a total mess.

Lovato shared photos of her new look locks on Instagram.

Check out the fadeout and the waves! That's a lot of silver and purple-y goodness.

Here's the new hue blown straight. With the lavender and silver mixed and blended, it gives off more of a blue tint. Anyone else notice those flawlessly shaped eyebrows, too?

Speaking of her awesome hair, Lovato opted for an undercut (which is essentially shaving half of your head) when she ditched the hot pink shade. Usually, the cut screams "Look at me! I'm punk rock! I'm edgy!" But Lovato's look is totally classy. It also gives off the optical illusion of being a faux bob with sideswept bangs or even a faux pixie, sans commitment.

And because I feel like it, let's take a little strolling down Demi Lovato Hair Memory Lane. She was blonde with cotton candy dip-dyed ends.

She was teal before it was a thing. But she made it more ladylike with the thick waves. I know, #HairTrendsetter.