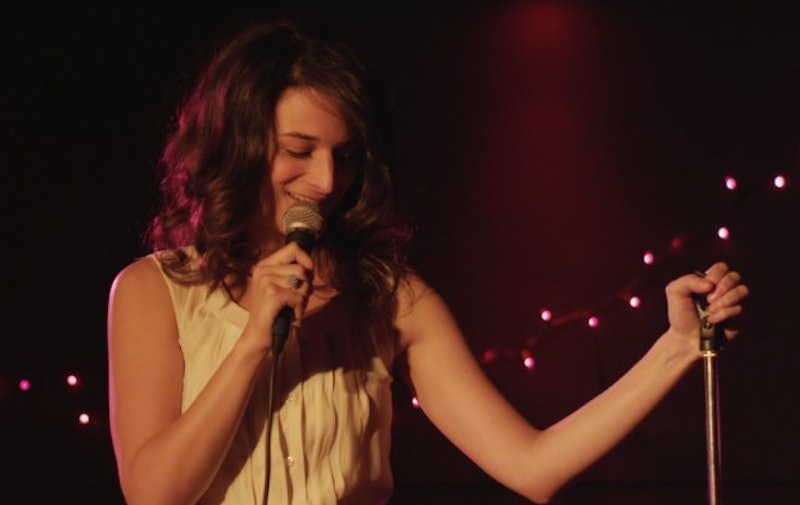 Jenny Slate's new film Obvious Child is a romantic comedy in the technical sense that it's a romance and a comedy, but to call it a "rom-com" would be ignoring the things it has that most movies in that genre are missing. Sure, it has a meet-cute at a bar and a few convenient coincidences that keep the love story going, but there's also emotional parent-child relationships, raunchy jokes that come in the form of the main character's stand up routine, and an honesty about real life relationships that many romantic comedies lack. While it is absolutely more than "an abortion movie," that aspect does play a big part in the movie's realism. That's why, as a former employee, I was so glad Obvious Child got Planned Parenthood right.

I worked at Planned Parenthood for two years and by the end I had a firm grasp on how things went down. I knew where certain charts were in the file without needing to use my alphabetical order skills. I knew what to say when answering the phone, how to schedule appointments, how to quickly get through to a real person when calling an insurance provider (the trick is swearing under your breath while pressing "0" over and over again). I also knew how to deal with more sensitive situations. Like what someone means when they say, "I'm calling to make an appointment" and when you ask what type they simply repeat, "I need to make an appointment." I also know what happens after that point.

When Slate's character Donna first visits Planned Parenthood after finding out she's pregnant from a one-night stand, she meets with a doctor who estimates how far along she is in her pregnancy using her missed period and emphasizes the fact that she can speak to Donna about her options. Donna replies that she's thought about it and has made her decision. This scene rang very true to me. I wasn't a nurse, but often answered phone calls that ranged from women who knew exactly what they wanted to women who wanted to learn every detail of every type of procedure, get information on adoption, and talk about the possibility of scheduling an ultrasound. It's not about forcing someone to talk about their options, just about making sure their comfortable with everything every step of the way.

At the end of the movie, when Donna returns to the clinic, everything from the way the reception area looked to the way the area where women rest following their abortion was on point. For anyone who sees the film and has doubts, there really is a room where everyone sits on comfy lounge chairs following their procedures. In that scene, it was like Donna had an anonymity which is definitely the case at Planned Parenthood. Even though we learn so much about Donna, in that moment she was in the same situation as all the other women from all different walks of life. (Also, yes, it's true that the ones who use sedation can be a little loopy.)

Even smaller things that the characters mentioned were correct. A surgical procedure really does only take a couple minutes and there really is (at least at the office where I worked) financial aid available. This isn't to say I would doubt the filmmakers doing their research, it was just nice to hear things spoken about so accurately and honestly. It allowed the important part of the story to be Donna's reaction to her situation and her interactions with the people around her. The abortion itself was just presented as though it were any day and any person. And they definitely got that part right.

More like this
Florence Pugh Reflected On Her ‘Don’t Worry Darling’ Experience On Opening Day
By Brad Witter
At 28, Melanie C Was Falling In Love & Reclaiming Her Confidence
By Olivia-Anne Cleary
9 Movies & TV Shows That Prove Stanley Tucci Elevates Everything He’s In
By Jake Viswanath and Radhika Menon
Everything You Need To Know About The 'Knives Out' Sequel
By Bustle Editors
Get Even More From Bustle — Sign Up For The Newsletter