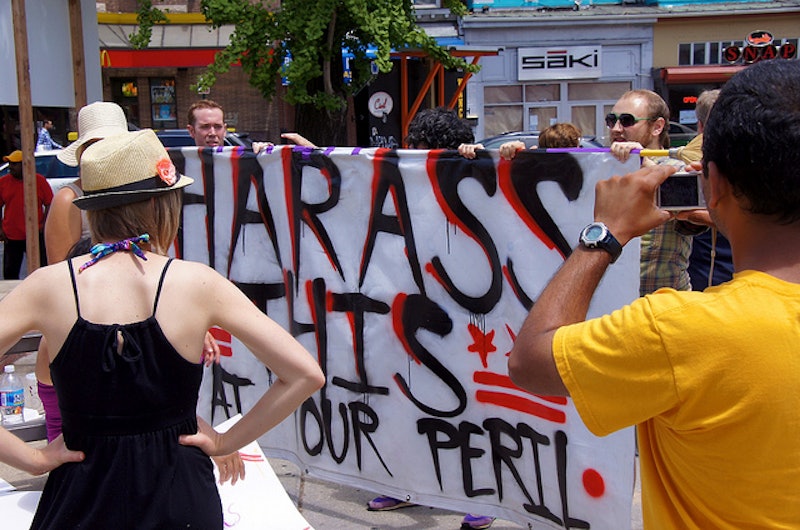 Do you love receiving lewd catcalls from strangers but worry that such a stance is unacceptable? Don't worry, conservative writer Patrick Howley is here to speak up for "the silent majority" of women whom he believes enjoy street harassment. After writing in defense of catcallers in The Daily Caller last week, Howley went on Sam Seder's talk show, The Majority Report, to further whine about how liberals and feminists are conspiring to encourage behavior that treats women like people.

Howley's original piece takes an academic study on the objectifying gaze and turns it into a paranoid rant about how "in the progressive future, men will not be able to look at women’s bodies." Howley seems to only invoke the study (which used eye-tracking software to analyze where men and women looked when viewing conservatively versus scantily clad female models) as a cover to write about what's really on his mind: How much women and Indians suck. Or something.

This is the kind of study MSNBC commentators can hold up when they’re talking about “rape culture.” Because men are just all Bashar al-Assad and sex is their chemical weapon. Fifty-one percent of the U.S. population is a victimized group now. Don’t you know? Women are like Indians now. You can’t give them a once-over, a polite grin, and be on your way. You can’t notice the fruits of their several-hour morning project of preparing themselves to be looked at. Pretty soon, looking at a woman’s chest will legally be a “hate” crime instead of a love crime.

So, this is what we're dealing with here. On Seder's show, Holwey takes offense to the very term "male objectifying gaze" and defends street harassment as something that "a lot of women like."

SAM: Have you seen a lot of women….that have said, “Thank god Patrick has stuck up for us, because we were getting worried that all this ogling was going to go away?” I mean, where are these women that are supporting this? Because you’re talking to women now. I’m sure you want to tell us something you can link to.

PATRICK: Well, I believe in Nixon’s idea of a “silent majority”. And I think a lot of people, women and men, are tired of an activist media deciding what is and what is not offensive. I think a lot of women met their significant other* through a situation that would be defined by the progressive movement as offensive.

You can watch the whole (long) segment below. Spoiler: Howley melts down into a babbling mess of cluelessness several times (and at least one anxious defense of ethnic jokes). In Rush Limbaugh fashion, Howley conflates being criticized for racist jokes and sexist comments with being robbed of his God-given American right to partake in them (in short: He wants you to stop judging him for being a racist and a misogynist, okay guys?). The best part (IMHO) comes around minute 34, where Seder yells at Howley "You're not being censored, you're being criticized!"

Image: Our Streets, Too! march against street harassment and gender violence in Washington, D.C. Via taedc/Flickr