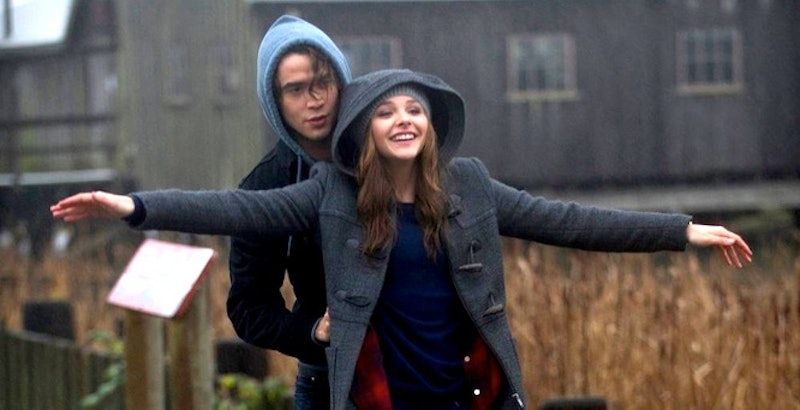 Remember back in April, when the trailer for If I Stay was released and melted you into a puddle of tears? Well, if you've spent the last two months recovering from that preview of the upcoming movie, sorry to inform you: it's about to get worse — a lot worse. On Thursday, an If I Stay prologue was released that somehow manages, in less than two minutes, to be even more heartbreaking than the movie's trailer. Prepare yourselves accordingly.

While the trailer focused mostly on showcasing the relationship between Mia (Chloe Grace Moretz) and Adam (Jamie Blackley) before the accident that took the lives of Mia's family, the prologue is all after: ambulances, hospital visits, scenes of Mia in tears as she watches tragedy after tragedy unfold before her eyes. Sure, there's a handful of uplifting moments — flashbacks of Mia and Adam taking in a concert, photos of her parents smiling and unhurt — but they're few and far between in a clip that's clearly meant to turn viewers into a sobbing mess. And oh, does it succeed.

The prologue also features Moretz reciting lines of narration straight out of Gayle Forman's novel, which should satisfy fans of the book hoping for a faithful adaptation. "How am I supposed to decide this? How can I possibly stay without Mom and Dad?" Mia asks, before later realizing, as in the novel, that the choice of living or dying is entirely up to her.

"I am running the show," she says. "Everyone is waiting on me. I decide. I know that now. And that terrifies me more than anything else that's happened today."

Aaaand tears. If I Stay, based on Forman's 2009 bestselling novel, will be released on August 22. Check out the prologue below: