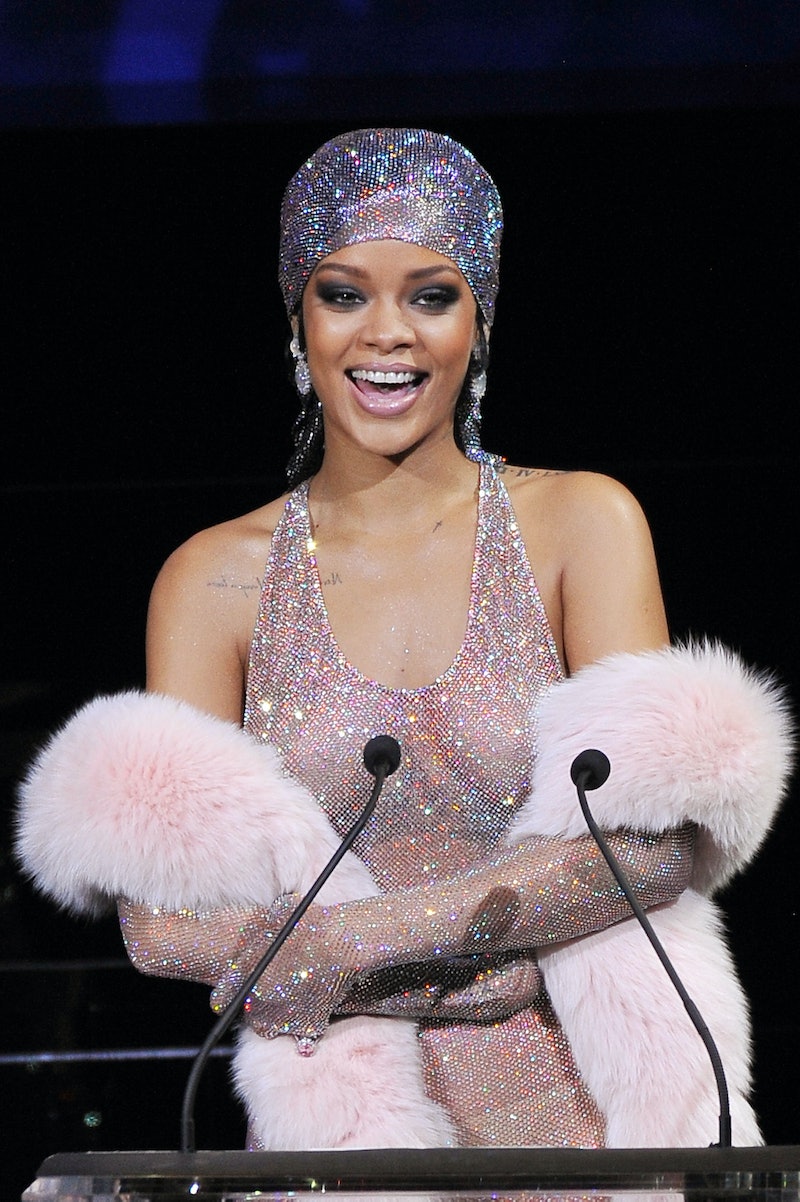 The moment I laid eyes on the stunning pictures of Rihanna at the CFDA Awards, I emitted a wail. I started sweating. I shouted "VICTORY" a la Johnny Drama. You could say the photos affected me. But can you blame me? Everything about the ensemble is just. So. Flawless. This is Rihanna's world, and she is kind enough to let us live in it. The dress should serve as a reminder. A day later, one brave soul attempted to recreate the instantly iconic and niptastic crystal gown look: Family Guy ’s Peter Griffin. He tossed on Rihanna's CFDA dress, accessories and eye makeup. He committed. And he nailed it.

And yeah, Rihanna dug it: Tuesday night, the "Pour It Up" singer tweeted a side-by-side of the Peter Griffin dress and her dress, and she made the Peter pic her Twitter avatar. (She's since changed the avatar, but it's for a good cause: She's promoting the Rihanna Hard Rock t-shirt. A portion of the t-shirt sales will benefit her charity, The Clara Lionel Foundation.) If her making the pic her Twitter avatar isn't an ringing endorsement, I don't know what is.

All of it is just so, so good. Well played, everyone:

So, who wore it better?! Uh, obviously it's a tie. OBVIOUSLY. We need a tiebreaker, and there is only one tiebreaker worthy of such an occasion: DANCE BATTLE.

Peter, are you ready?

RiRi, are you ready?

LET'S DO THIS. Okay, Peter. You're the challenger, so you go first. Show us what you've got:

Ooh dang, Peter. Going for it right out the gate. You're up, Rihanna:

Serving the judges smoldering Matrix realness! Can you top that, Griffin?

RiRi. He hit us with The Dance of Life. This is not a drill. You're going to have to give this 110%.

Whoa. I felt that one. Try and follow THAT, Peter.

Interesting. What style is that? Modern? Contemporary? Huh. RiRi, it's your turn.

YAAAAAS. Griffin? It's your final move. Make it count.

Wait, really? That's your last move? Come on, you can do better than that. Go big or go home. You sure you don't want to go with the naked dolphin thing? No? Your call, man.

Wait, why are you waving goodbye? Where are you going?

Um... I guess that means we'll have to finish this dance battle another time. Sorry, everyone!