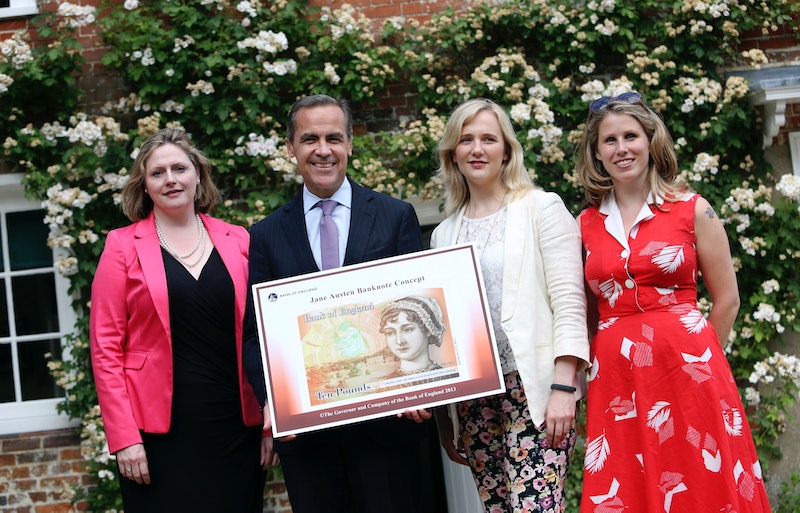 In the past week, The Women's Room co-founder Caroline Criado-Perez has received hundreds of anonymous messages from men threatening to rape and kill her. She has been told to wash her face with acid and taunted with promises to tie her to a stove. Perhaps worst of all, she was dismissed by Twitter after complaining about it.

Criado-Perez's crime? Starting a campaign to put women on British banknotes, in response to the news that Elizabeth Fry would be replaced by Winston Churchill on the £5 note. Little did she know that the success of landing Jane Austen a spot on the £10 note would only be the beginning of another long battle.

In the 12 hours that followed the announcement, Criado-Perez reportedly received roughly 50 violently misogynist tweets every hour. Rather than cowering behind her computer, she actually re-tweeted many of the attacks along with the hashtag #ShoutingBack. Watchdog blog I Will Not Put Up With This also began to post screenshots of the rape-related tweets (warning: some of the content is highly disturbing).

The blog's Twitter account was suspended twice in 24 hours for attempting to draw the attention of Twitter's PR department to the offensive tweets. Not one of the original posters, meanwhile, was suspended until the case stirred up international media attention.

Some of the offending accounts, with handles like @rapeherNOW and @rapey1, were set up expressly for the sake of trolling, while other Twitter users took to their own personal accounts to spew abuse. One user even taunted, "Call the cops, we will rape them too."

Thankfully, at least one of them was wrong. On Sunday, a Manchester man was arrested for harassment, while dozens of others are being investigated under the UK's Malicious Communications Act, which makes a "provision for the punishment of persons who send or deliver letters or other articles for the purpose of causing distress or anxiety." British politicians have also come out to criticize Twitter's response to the case, and a petition asking Twitter to add a "Report Abuse" button is close to reaching it's 75,000 signature goal.

This case could be a game-changer in the way international social media websites approach the balance between freedom of speech and freedom from hate speech. Companies like Facebook, Twitter, and Reddit (home of the /r/rapingwomen and /r/killingwomen subthreads) are faced with the difficult task of maintaining consistency in their community guidelines — while navigating an incredibly diverse international landscape of hate speech laws.

A number of high-profile cases in the U.S., such as this year's events in Steubenville, have recently drawn attention to the paradoxical power of social media in rape cases. On one hand, these sites can help the public organize against such horrifying acts. On the other, they are often the platform through which victims are publicly humiliated in the first place.

This spring, a campaign using the hashtag #FBrape successfully convinced a number of high-profile advertisers to boycott Facebook due to the proliferation of sexually violent images on the site. The social network quickly agreed to change its anti-hate speech policy to include remarks promoting sexual assault. Advocates for Criado-Perez's cause are taking a similar approach, asking Twitter, "Do your advertisers really want to appear next to this?"

According to company policy, Twitter will apply local law if there is legal precedent, but does not include a definition of hate speech in its own Terms of Service. In other words, if this case had taken place in the U.S. — where the Supreme Court has privileged First Amendment rights time and time again over protection from hate speech — there might have been even less of a response.

Internet trolls get their kicks from pissing off people like Caroline Criado-Perez and, well, us. Governments might not always be willing or able to hold people responsible for the things they say online, no matter how hateful. That leaves it to social media platforms (and their users) to help implement policies to show that threatening violence against women isn't a joke.

More like this
Sandra Bullock, Girlboss Extraordinaire
By Matt Harkins & Viviana Olen
The 'Hocus Pocus' Sequel Finally Has A Release Date & It Makes Total Sense
By Shannon Barbour and Radhika Menon
How The City Healed Five Years On From The Manchester Arena Attack
By Ella Glover
Plan C Vs. Plan B: What's The Difference?
By Lexi Inks
Get Even More From Bustle — Sign Up For The Newsletter