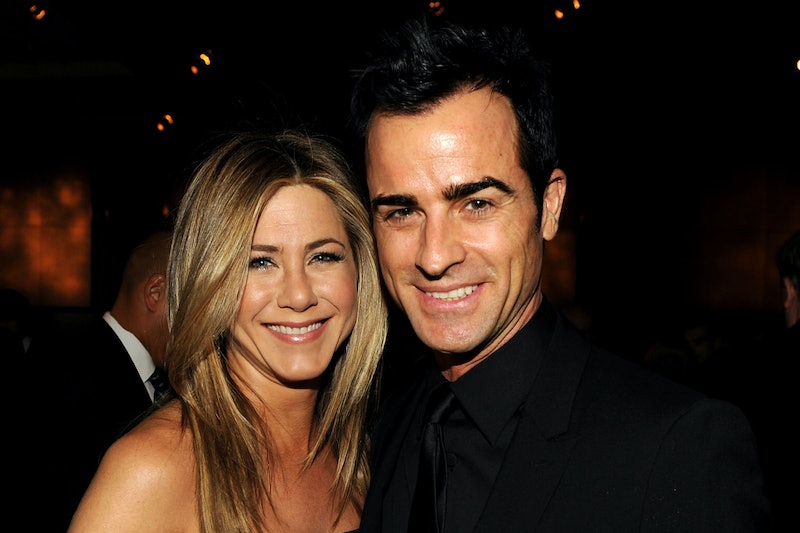 For a woman who rarely does anything scandalous, Jennifer Aniston certainly does attract a whole lot of gossip and rumors. It seems that whenever people aren't speculating about whether Jennifer's tight dress is a baby bump, they are fishing for details about her love life. Despite the fact that "Brangelinagate" happened ten years ago (seriously! 2004!) people still think that Jennifer has some weird love curse over her head that must make all of her relationships dramatic and gossip-worthy. One relationship that tabloids and fans alike love to talk about? Jennifer's relationship with Justin Theroux. There's constant speculation about whether are these two still together, so we did a little research. Here's what we uncovered, because, hey, we know you want to know, right?

Jennifer and Justin — who will star in HBO's new series The Leftovers — met in 2007 on the set of Tropic Thunder , which Justin co-wrote with Jen's buddy Ben Stiller. (A fact that I have just learned and has made me like Justin so much more.) According to her interview with PopSugar, at first Jen thought that Justin looked sort of like a "serial killer," but began dating him in 2011 anyway. The two got engaged in 2012 on Justin's birthday, clearly an awesome gift for the both of them. Jennifer got the rock, and Justin got the most eligible bachelorette in Hollywood.

Gorgeous couple, right? It's totally not just the Instagram filter.

Of course, post-engagement, the rumors started flying. Was Jennifer pregnant with Justin's baby? Why didn't they set a wedding date yet?! Are they broken up?! The rumors started to swirl this past February when the two appeared to take a mini-break from their relationship. The key word here is appeared: According to HollywoodLife, Justin and Jen first stepped out together on March 11 after nearly a month of not being seen together. So, what was the reason for the break?

According to the source at HollywoodLife, Jennifer thought she was pregnant, and "demanded" that Justin marry her so that "her baby could have a father." Justin, despite having already proposed to Jennifer, allegedly didn't want to do that. Now, clearly Jennifer isn't pregnant, and the two aren't married yet, so we can probably assume that whatever issue they had, if it ever existed in the first place, worked itself out. In fact, the two looked absolutely ravishing with one another at the Oscars, where Jen flashed some bling given to her by her special guy.

Despite Jennifer and Justin spending some time apart and having a long engagement, they seem to be doing just dandy.