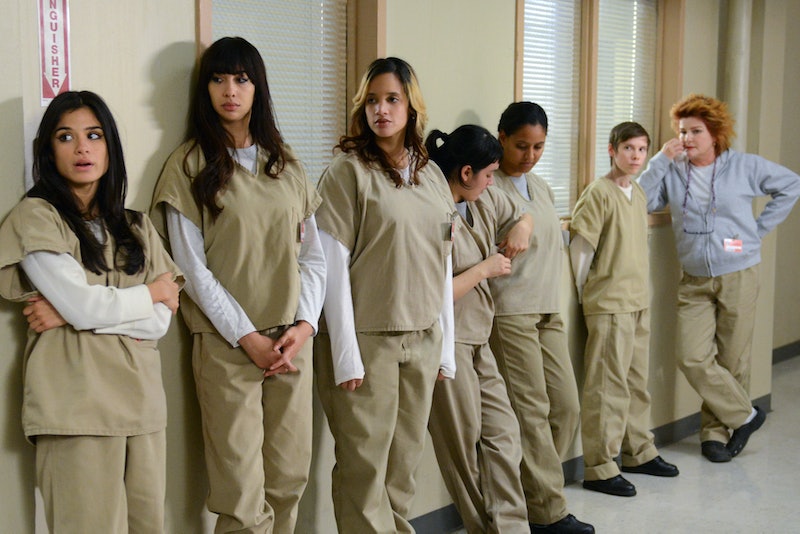 With Netflix's smash hit Orange Is the New Black Season 2 dropped Friday in one mainline-worthy package, there's no question where most of us diehard fans will be for the next day or so — that is, in bed or on a couch, eyes glued to our computers for as long as it takes to find out exactly what the writers have in store for Piper, Pennsatucky, Ms. Claudette, Crazy Eyes, et al. But meanwhile, it's worth wondering, where exactly is it our beloved characters are meant to be as they live out all this tightly-wound drama? The show, which is based off of Piper Kerman's memoir of the same title, is set vaguely in upstate New York at "Litchfield Correctional Facility" — a place that, much like Middle Earth and Gotham City, is not technically, for all intents and purposes, real. However, Kerman did serve some real time, and the cast and crew do show up at a real building to film; somewhere, in that Venn diagram of fact and fiction, lie our answers. Let's dive in, shall we?

In the first place, there is, in fact, a prison called "Litchfield" — but it isn't in New York, nor is it currently operating. "Litchfield County Jail," originally built in 1812, is the oldest public building in the town of Litchfield, Connecticut. And it looks it, too: The colonial columns, the homey red paint, the wall it shares, literally, with the town bank — all signs point to "Revolutionary War museum" or something equally New England-style innocuous.

Indeed, a 1994 New York Times article referred to it as "a country club of penal institutions where the living was positively easy," recounting tales of "volunteer firefighters serving sentences for minor offenses answering the town fire bell with dispatch" and "prisoners shimmying up and down sheets on shopping forays, mostly for cigarettes and booze" — a far cry, certainly, from the hyper-strict contraband rules imposed in its televised counterpart. Since shutting down as a jail, however, the Litchfield building has played host to several drug treatment programs — and from 1993–2010, it was rebranded as McAuliffe Manor, a women's rehabilitation center that sounds right out of OITNB.

Plus, the original "Litchfield" wins some points for locational accuracy: In Piper Kerman's book, she recounts her time spent at FCI Danbury, which is also in Connecticut, about an hour south. Danbury is accordingly much more reflective of her alter ego Chapman's day-to-day than its defunct colonial namesake — 499 female inmates, low and minimum security facilities, sprawling architecture, lots of beige.

The demographics have changed a bit, however, since Kerman served out her sentence: In July of last year, the Federal Bureau of Prisons (BOP) announced plans to transfer over 1,000 of its female inmates to Alabama, in an effort to relieve other prisons' overcrowding by converting Danbury — the only female federal institution in the Northeast — into a predominantly male facility. Kerman penned an op-ed last August arguing against the move, calling the inmates' subsequent distance from their families "a second sentence" — and ultimately, under pressure from numerous dissenting voices, including Senators Kirsten Gillibrand of New York and Chris Murphy of Connecticut, the BOP ceded to a compromise in November. Now, only several hundred inmates are being relocated (with emphasis on those who don't have family in the Northeast), but the conversion to a male facility is still in progress.

Still, the minimum security satellite facility where Kerman served her term is set to continue housing women, razor-wire and all — its pseudo-rural institutional atmosphere what OITNB's showrunners were thus charged with recreating at Kaufman Astoria Studios in Queens, NY. What might sound like an impossible task seems to have gone surprisingly well; in a recent walk-through of the OITNB set, The Daily Beast's Kevin Fallon noted the extreme attention to detail:

The Litchfield Prison set, first of all, is designed with all the functionality of a real prison, which is actually quite astounding to see. Unlike the three-walled sets of Hollywood soundstages, this is made for every nook and cranny to be filmed.

Perhaps this wholeness of place plays a part in the show's emotional success, allowing actors to really submerse themselves in the world of the story (see also: Firefly, which had each floor of the spaceship Serenity built in its connective entirety, and Scrubs, which shot in a renovated old hospital building). Fallon even quotes the show's production designer Michael Shaw recalling how "Piper Kerman actually came in and was freaked out. She said, ‘This is making me really upset,’ which was the best compliment" — because, of course, it means that he and the propmasters are doing their jobs to a T.

So, there you have it: "Litchfield Correctional Facility," born of an olde-timey institution turned women's rehab, a women's federal prison soon to turn men's, and a soundstage in Queens that's dressed up so well it gives ex-cons the heebie-jeebies. But most importantly, to reiterate, the most recent goings on at said Correctional Facility are now officially available on all of our computers — so, really, what're you waiting for?