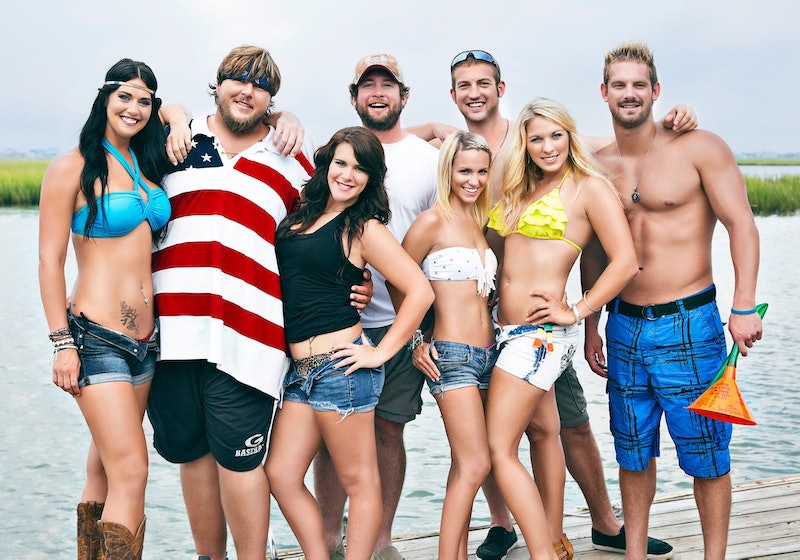 Five years ago there was this show, right, this tiny show called Jersey Shore that came out of nowhere to become the epicenter of our pop cultural focus. Overnight, tanned meatheads with names like "Snooki" and "The Situation" and "DJ Pauly D" took residence not just on our TV sets, but in our hearts. For five more seasons they lived and loved and frolicked. And just as quickly as they had made their mark, they were gone.

Now the creator of Jersey Shore, SallyAnn Salsano, has figured out a way to take that perfect Jersey recipe -- outsize personalities fueled by copious alcohol consumption in a small, preferably niche environment -- and try again. The result is Party Down South , CMT's highest rated show of all time and basically Jersey 2.0, right down to the characters. This is not a bad thing!

Thursday's episode offered precisely the kind of "assembling the crew" action you'd expect from a season two premiere. These eight strangers had become a family by the end of last summer, man (or as Mattie says, a bunch of "drunk, trashy yard-pissers"). So when Tiffany picks up Taylor "Lil' Bit" Wright, or Ryan "Daddy" Richards (so named because he's the oldest one on the show) grabs his buddy Murray, you can feel the goddamn love. It's PRECISELY the second season premiere of Jersey Shore, everyone thrilled to be taken out of their lives once more to...well, drink like crazy.

Jersey had the t-shirt shop (and later pizza place, in Italy) that everyone ostensibly worked at to mediate the insane partying, or at least convince us there was a world beyond that endless pitcher of Ron Ron Juice. What's the rub in Athens, Georgia for the Party Down Southers? Aside from the brief moments they were home with their adoring families, the entirety of Thursday's episode took place in their new home. Almost all of that time, these guys were obliterated.

Let's talk comparisons. Clearly "Daddy" is the Situation here, a vain (though less than Mike Sorentino, obviously) older guy clinging to the vestiges of youth even though he's older than my parents when they had me. "Lil' Bit" -- there's no mistaking her for anything but a Southern Snooki, a pint-size bruiser who's nevertheless the angelic heart of the series. Mattie and Tiffany are collectively JWoww, Mattie moreso in appearance (that tattoo!) and Tiffany for her diehard friendship with Tiffany and general take-no-prisoners attitude.

Since everyone seems to like Murray without hesitation, he's gotta be our Pauly D. Maybe Walt's Vinnie? The normal one? If Lauren is the "emotional one" as she's described, then she's definitely Sammi. Which would make Lyle some even more developmentally challenged version of Ronnie?

Holy shit -- I was only sort of kidding when I launched into those direct PDS to JS character analogies, but they totally hold up. And if that's the case, well...we're going to have an awesome season two, a stellar season three, an avant-garde season four, a brief return to glory season five, and a sad, over-the-hill season six. Can't wait to watch this supernova burn brightly and then explode across the sky!