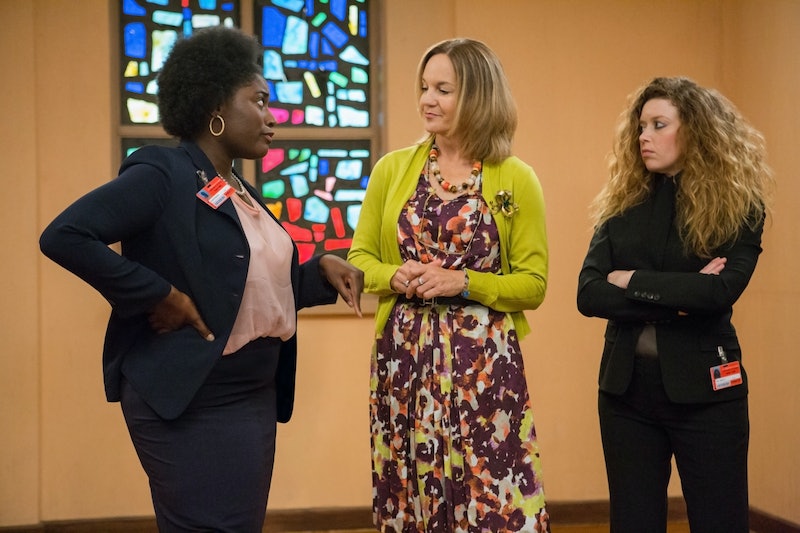 In case you've already forgotten (how could you?), the Season 2 opener of Orange Is the New Black saw Piper whisked away to Chicago to testify at the trial of Alex's old boss. It also saw her go a little crazy (to be fair, she was convinced she had murdered Pennsatucky — she hadn't — and if withholding information qualifies as a form of torture, she basically got waterboarded) and get devastatingly used by Alex (again).

And the second episode of the season saw Piper… a total of zero times. We returned to Litchfield Prison, but without Piper as our guide. The episode, "Looks Blue, Tastes Red," brings a job fair to Litchfield. It's a good thing Piper is out of town for this one because it's a dress for success competition, and, as the WASPiest inmate around, she would have blown the others away. The women are given a rack of options and tasked with choosing the best interview outfit. Then they're judged on their choices, because that exactly what inmates struggling to find their place in society need.

Without Piper around to pull focus, Taystee steps up to the plate as the star of the episode. Flashbacks (featuring the most amazingly perfect young actress playing Young Taystee) show us that she grew up in the system, desperate to be adopted. She went around the "adopt us, please" fair being precocious to any potential parent that would listen. When no one was interested in hearing her recite the periodic table, she ended up chatting with V, a woman who would later take her in and introduce her to the life of crime that lands her in prison.

Taystee has always been a fan-favorite (or at least, one of my personal favorites). When she finished her sentence in Season 1, I was torn between being ecstatic for such a bright, wonderful person getting out of prison and devastated about a character I loved leaving the show. When she wound up back behind bars, I can't say I was upset.

Back to the present and Taystee is as precocious as ever. First of all, she cheats at the mock interview pageant, picking the outfit that won the previous year instead of trying to find the one best suited for her. She makes it to the top two looks and into a final interview round (hearing her describe skills learned during her previous employment, like meeting with an unhappy client to change his day-to-day operations, is golden, when you keep in mind just what her employment was).

Taystee wins the mock interview, which she thinks (for some reason) guarantees her an office gig on the outside. In reality, it earns her a stern talking to about entitlement (umm…) and $10 added to her commissary fund.

Yipee. Life isn't so good for the non-Pipers, either.

More like this
Grammys Host Trevor Noah Made Adele's Dream Of Meeting The Rock Come True
By Brad Witter
'The Last Of Us' Episode Schedule Competes With The Super Bowl & Oscars
By Brad Witter
'The Last Of Us' Episode 4 Put Twitter Into An Emotional Spiral
By Alyssa Lapid
Pedro Pascal Barely Got Through The "Lisa From Temecula" 'SNL' Sketch
By Stephanie Topacio Long
Get Even More From Bustle — Sign Up For The Newsletter
From hair trends to relationship advice, our daily newsletter has everything you need to sound like a person who’s on TikTok, even if you aren’t.