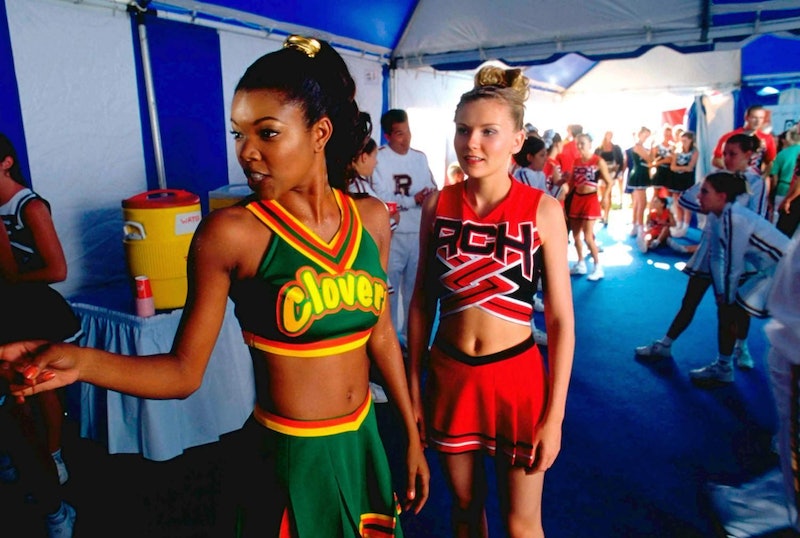 Bring it On is one of those movies that has been reprised so many times, you’ve officially lost count. Seriously, I feel like The Land Before Time may be the only movie with more sequels. One thing’s for sure though. Nothing beats the original. To this day, when someone says “it’s cold in here...” it’s impossible for you to resist completing the thought—“there must be some Clovers in the atmosphere.” Those ultra catchy cheers, the spirit fingers, and who can forget the hair? Updos, high ponytails, hair-sprayed ringlets-- it was all early aughts hair porn. Even if this movie didn’t convince you to join a Pop Warner cheer team, you were totally pinning these hairstyles to your mental pinterest board.

And what better season can we put these pins to good use than in the sweltering heat of the summer? Through all that strenuous physical cheer-tivity, the Toros and Clovers always had their manes on point. Tumbling, sweat and SoCal heat are no match for these bobby pinned and swirled coifs. Only in the movies right? Wrong! Because with a little ingenuity, and a couple trips to the pharmacy, we can easily incorporate these hairdos into our summer beauty repertoire. Our favorite looks are to follow. And don’t forget, never drop the spirit stick!

This is some Seventeen Magazine cover girl circa 2001 realness...

Hair Rosettes that cascade into so many soft curls...

All you need are some butterfly clips and a curling iron. Boom.

Perfect compromise for the gal who's thinking about dreading her hair for Bonnaroo, but can't quite commit.

You're itching to indulge your Peter Pan complex.

Put a bandana on it!

Try pairing with a couple scrunchies for extra control.

You've gotta saturate your hair with Aquanet and leave the curlers in overnight, but the result is worth it.

Your head feels so fuzzy and cozy.

When all else fails, just go au naturale...

Meaning, just wear your hair down. Try not to forget your top the day of pep rally. That would be real bad.