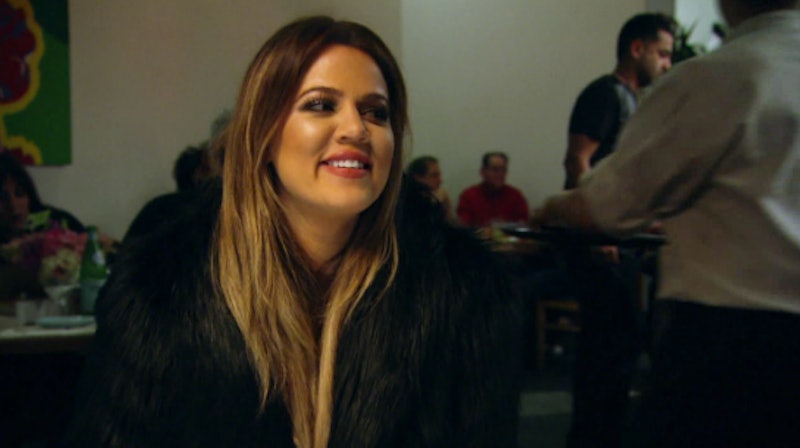 Tired of Game of Thrones? Here's a show that you can tune into at 9PM on Sundays, instead. Season 9 of Keeping Up With the Kardashians premiered Sunday on E! and the "this season on" at the end of the episode promised a whole new slew of episodes that will catch us up with what the reality star version of The Brady Bunch has been doing. It's too bad, though, that we already know exactly what this bunch has been up to.

On Sunday night's premiere, we saw Kim Kardashian and Kris Jenner take a pole-dancing class (much to Kim's annoyance), Kourtney Kardashian pretend to be happy that Scott Disick bought her a sports car, and Khloe Kardashian pack up the home she shared with now ex-husband Lamar Odom — all very typical stories for an episode of Keeping Up. It was only the last few minutes where the show tried to shock and surprise us. Kourtney tells Scott that she's pregnant with their third child!

That would be surprising... had we not just seen Kourtney's pregnancy announcement on the cover of every tabloid and news site. Keeping Up With the Kardashians films months in advanced, so it's not like Kourtney could keep her pregnancy hidden for very long. But as I was watching the new preview for the rest of the season, I couldn't help but feel like I saw all of these events on the show already. Obviously, I didn't — but the Kardashian saturation in the media has certainly made me feel like I have.

Keeping Up With the Kardashians is what launched Kim K. and Co. into the celebrity stratosphere, but there was a time when the show was on and their lives were far less documented in the tabloids. The show never felt like a recap of all the articles published about them, it felt like a reality show about a weird, funny family. Watching KUWTK was like getting a sneak peek at the lives of the Kardashians (and the Jenners!) — now, it just feels seriously redundant.

Keeping Up is one of my favorite reality shows — despite the fact that the Kardashians and Jenners are insanely overexposed, they are also an example of a modern-day family, quirks and all. Despite their collective wealth, fame and ego, this is a family that tries very hard to support and care for one another — something that's a little hard to remember when we read countless tabloid articles about the latest in-family feud or Kim's insanely expensive wedding to Kanye West. Of all the things umbrellaed under the Kardashian brand, the show seems like the only thing close to their reality, and it's a bummer that their overexposure is threatening what feels like their only genuine-ish property.

Tune into Keeping Up With the Kardashians Sunday at 9PM on E!