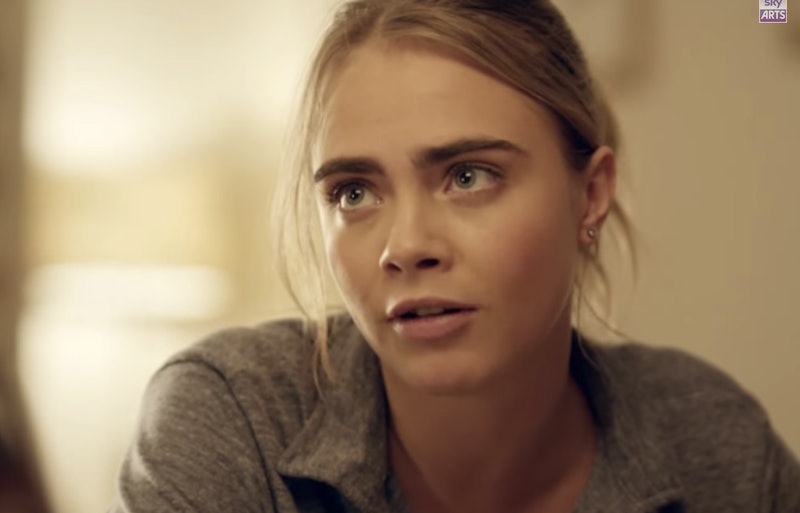 Cara Delevingne isn't only the most fierce eyebrow connoisseur currently on the fashion market, she's also now a model-turned-actress. Yes, the model is known best for her bold brows, rocker style, and relationship with Michelle Rodriguez. She makes killer NBA appearances, shows up at star-studded events such as Stella McCartney's garden party, and generally slays the fashion world. But now we have a (very short) look at how the model fairs in the world of acting, thanks to this clip of Delevingne in Timeless, a made-for-TV movie in which the model plays a woman whose fiancé is a soldier in Afghanistan. Though this is Delevingne's first leading role, it's not her first — she had a cameo as Princess Sorokina in Anna Karenina.

So how does Delevingne hold up? She's certainly not the first model to expand her career into the acting stratosphere, and she is in both good and bad company. For some models, such as Rebecca Romijn, acting was second nature. Some others, like Tyra Banks, dabbled in the field repeatedly but never quite stole the show. (Though Life-Size will forever hold a special place in my heart.) Some are just downright... bad. (Ahem, Kate Upton.) As for where Delevingne falls? Based on this clip, somewhere between the awesome and the awful. somewhere between the awesome and the awful. It's not painful to watch her perform, once I get past the fact that my eyebrow idol is discussing the hardships of being in a relationship with someone at war over a burrito. But there is a certain awkwardness to her acting, though that could certainly be rooted in the fact that it's pretty awkward to judge someone's skills in 60 seconds.

But judge for yourself below — will Delevingne prove to be a timeless actress in Timeless, or will her performance be lumped with this?

More like this
At 28, Lesley Manville Was Acting, Picketing, & Singing Kate Bush Songs
By Olivia-Anne Cleary
Reese Witherspoon Gave Fans Hope For 'Legally Blonde 3' After This Surprising Movie Inspired Her
By Jake Viswanath
22 Movies On Netflix That Are Perfect For The Whole Family
By Bustle Editors
Jennifer Garner Shared The Beauty Wisdom She Thinks Is Better Than Fillers
By Brad Witter
Get Even More From Bustle — Sign Up For The Newsletter