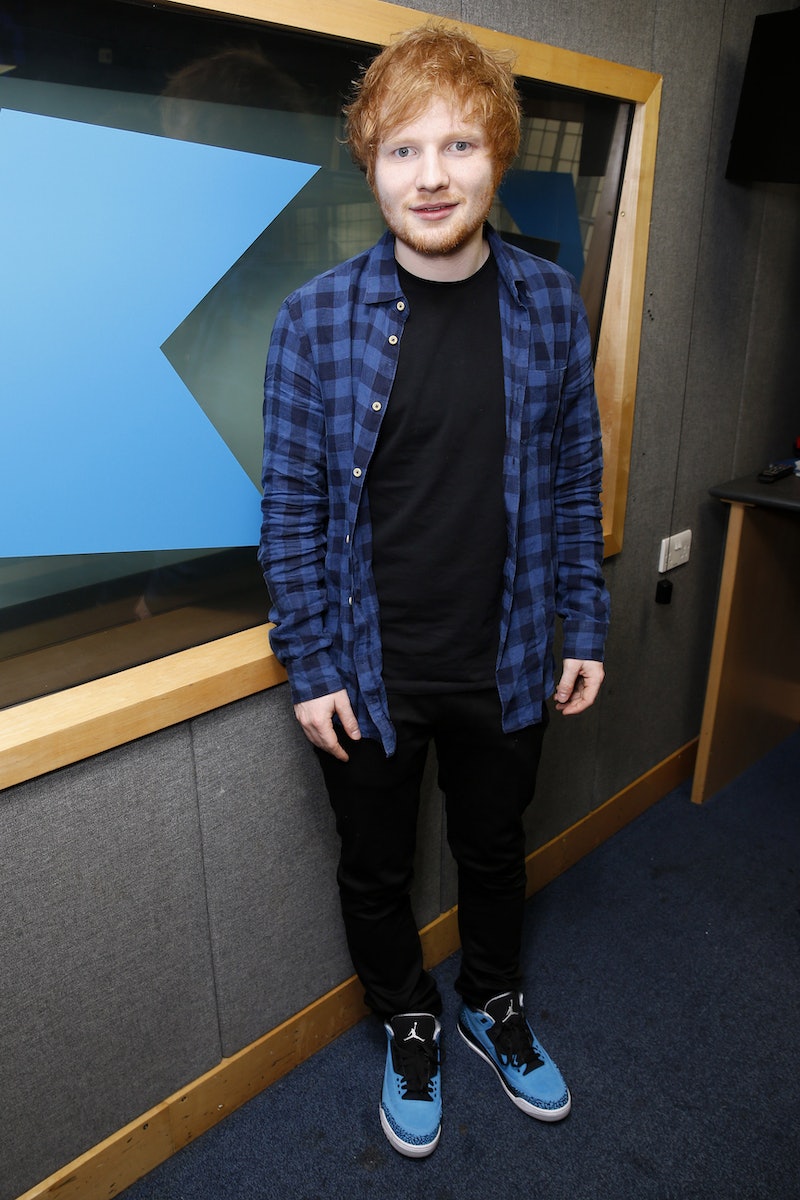 For someone who pours so much of himself into his music, Ed Sheeran is pretty mysterious when it comes to his personal life. There's been a lot of speculation that his song "Don't" is about his ex-girlfriend Ellie Goulding, but it looks now he has someone else to write about. Sheeran confirmed that he does have a girlfriend, so the only question is who is she? Before you even ask, no, he and his allegedly platonic best friend Taylor Swift haven't finally gotten together. It's tricky however, because while we know his girlfriend isn't Swift, we don't quite know who she actually is. It doesn't seem like the mystery woman's identity will be revealed during MTV's 9 Days and Nights of Ed Sheeran, so let's go through the little information we do have.

The first thing we know makes the whole identification process more difficult: she's not famous. According to an interview Sheeran did with Us Weekly a few weeks ago, his girlfriend works for a chef. So not a fellow musician, or an actress, model, or any other career in the public eye that would make figuring out who she is a little easier.

In the same interview, Sheeran also revealed that the woman is Greek, saying that though she's a great cook overall, Greek food is her specialty because of her background. This would actually seem to confirm that the unidentified girlfriend is Athina Andrelos, who was rumored to be dating Sheeran in April. The only problem is that Athina Andrelos works as a radio promotions assistant, not in the food industry. Yet Andrelos' career lets her fit another piece of information that Sheeran provided—he met his girlfriend on tour. It would've been easy for Sheeran and Andrelos to meet while he was on tour, since a large part of music publicity involves radio.

The only other thing we know about Sheeran's lucky lady is that by April 2014, they had already been dating for a few months. By being so secretive about his relationship, the only thing we can safely predict is that his girlfriend won't show up on his MTV documentary. If Sheeran isn't even ready to give her name in interviews, it's doubtful that he'd be okay broadcasting her identity on TV.

For now, all we can do is speculate using the small tidbits Sheeran has mentioned in interviews. Is it Andrelos and the chef thing is just a cover? Does Andrelos moonlight working for a chef? Or is it another Greek woman who the media hasn't discovered yet?

At least we know that no matter how secretive Sheeran continues to be, we're bound to eventually hear about his girlfriend in one of his songs.

More like this
Jennifer Lopez Shares Rare Holiday Photos Of Ben Affleck & Her Twins
By Radhika Menon
Julia Fox Says She Dated Kanye To “Distract Him” So He’d Leave Kim K Alone
By Jake Viswanath
Yes, That's Lindsay Lohan's Sister Singing In The 'Falling For Christmas' Movie
By Radhika Menon
Taylor Swift Fans Sue Ticketmaster For The Eras Tour “Ticket Sale Disaster”
By Jake Viswanath
Get Even More From Bustle — Sign Up For The Newsletter