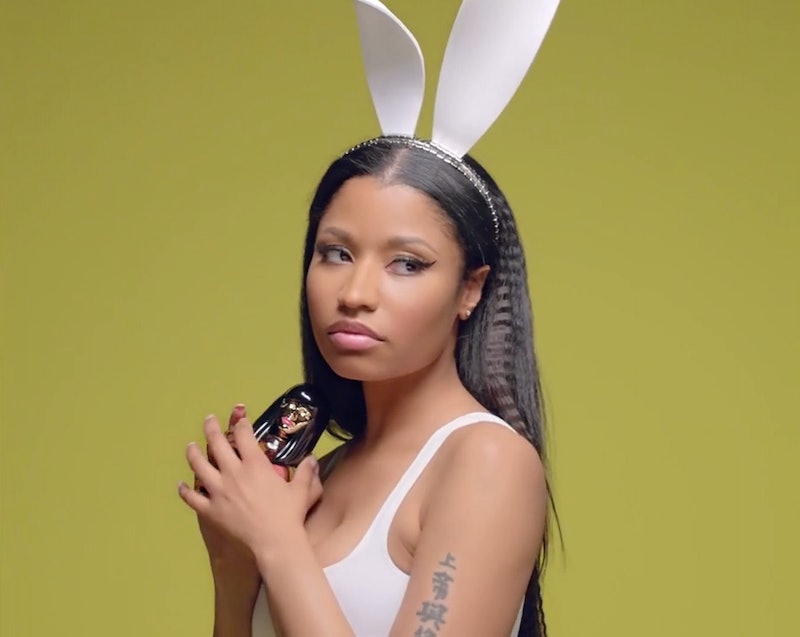 If you thought that the preview video for Nicki Minaj's "Pills N Potions" was kind of trippy, that short clip had absolutely nothing on the final product. I know it's cliche to describe any and all wild, bizarre WTF-ery as being like an acid trip, but the "Pills N Potions" music video was literally like an acid trip. If crying liquid tin foil tears out of your eyes doesn't sound like a hallucination you might have after taking really bad drugs, then clearly you've never taken really bad drugs. Which is fantastic.

"Pills N Potions" basically cycles through various, bunny-themed images as well as some disturbing ones. The album cover got us used to the fact that Minaj can totally sing an emotional ballad with a complete straight face even with a pair of bunny ears on her head, so that, believe it or not, was the most normal part of all of this. That, and the buff, tattooed, shirtless man standing around behind her looking buff, tattooed, and shirtless. I won't even say anything about the bunny Pez dispenser popping pills in time with the beat.

That's about when the images shifted to a serious-faced Minaj holding her buff on-screen boyfriend's head in her arms.

Now, we speculated when the preview came out that maybe Minaj had had a bad experience with rabbits in her past that had led to this video, but it's starting to look that perhaps she was going for more of a White Rabbit from Alice in Wonderland thing. If Wonderland existed in the modern day, it would probably resemble this music video. Not that the Disney movie wasn't trippy in and of itself, but our animation skills have gotten better now.

It was clear from the lyrics that Minaj was raging at someone or someones through this song and never was that more clear than after watching "Pills N Potions". Is Alice in Wonderland imagery a strange choice for what otherwise plays out as a metaphorical revenge video? Maybe. Does Minaj pull it off with style? Definitely.