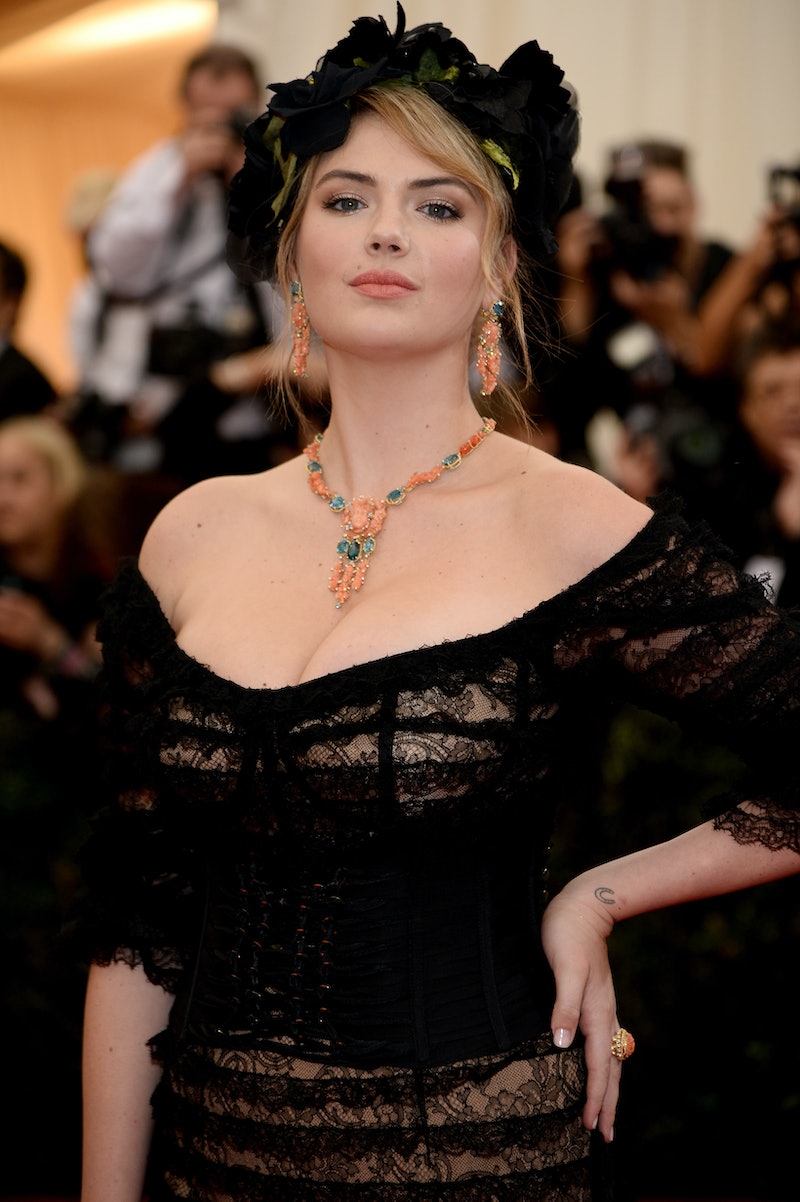 Happy 22nd birthday, Kate Upton! The bodacious blonde model, Sports Illustrated swimsuit issue fave, and actress celebrates her birthday today (June 10) and we're celebrating by looking back at ten of her most recent, super sexy, and grown-up looks. Upton, who oozes milk-fed, Midwestern sex appeal, has, er, developed, into so much more than that girl you are jealous of since all the guys gawk at her.

With multiple Vogue covers in her repertoire, photoshopped armpits in ELLE and a cutely comedic role in the Cameron Diaz vehicle The Other Woman, Upton has risen above her initial status as a boob babe and a dude magnet. She's obviously so much more than just a pretty face, continuing to prove that sexy deserves to be taken seriously, too.

So, yeah, here are ten recent times where Upton blew us — and even her haters — away with her fresh and sexy style. You can clearly chart her evolution and the more subtle way she shows glowing, dewy skin. It's not quite as obvious and in your face anymore. Enjoy!

Upton's strapless, silver Dolce & Gabbana mini was sprinkled with appliques and displayed her famous cleavage and majorly toned legs. She went classic — and really short — but the result was aces.

She was largely covered up in a long-sleeved, custom Versace mini, cinched with a Giuseppe Zanotti belt. While her boobies are her most famous assets, her bombshell-big hair, red lips and LBD indicated that Kate Upton was making a style shift, fusing hawt with ladylike. It's not easy to do.

Upton was supremely subdued in a higher waisted and full skirt WilliamVintage dress. She totally rocked the '50s housewife look, yet she Upton-ified it.

Upton is known for taking the plunge and she did it again at a party celebrating the mag that loves her the most. She poured her curvy frame into this clingy black Antonio Berardi frock. Her girls were defying gravity and refused to be stuffed down. Science be damned.

Upton's tomato red dress once again reminded us that she has other assets that draw the eye — her stems. But what's also beguiling about her, besides the peek-a-boo shoulders of this ensemble, is that kittenish grin. Most celebs are cute or sexy, but rarely are they both. But then again, rare is the girl who is like K. Upton.

6. Hanging Out at a Gifting Suite in September 2013

Upton was a vision of summer in a crisp, white dress at a gifting suite in September 2013. See the pattern? She wasn't solely relying on showing off those tatas. She also showed curvy girls that yes, they can wear minis, sleeveless frocks and short hems, too. So send her a "thank you" tweet, all you busty gals!

The shoulders of this LBD were of the statement sort and the cleavage was there, but look closely and you will see a sheer panel that mimics a slit in the skirt. What a tease of a detail from Kate the Neophyte Fashion Plate.

Upton's real girl ensemble of black leggings topped by a glossy leather jacket, paired with a messy updo and red pointy heels, was so easy to copy. You, too, can be an Everyday bombshell with this type of outfit and without breaking the bank. Just head to Forever 21.

9. At a 2013 Sports Illustrated Event in Las Vegas

This cornflower blue dress with pattern detail looked painted on her built-like-a-brick-you-know-what-house figure.

Her shiny and textured Fendi cocktail dress was a chic yet fiery choice that screamed "MOVIE STAR." I'm giving two enthusiastic thumbs up to her stylist, who has elevated her from a sexpot to a sexy style star. It's been a successful transition so far, since she still shows skin without becoming frumpy.

More like this
Hailey Bieber Wore A Glamorous Fur Coat & Bustier For Her Birthday
By Allie Fasanella
Here Are All 703 Outfits Rachel Wore On Friends
By Kat George
The Best Heels For Bunions, According To A Podiatrist
By Margeaux Baulch Klein and Maria Cassano
Dua Lipa On YSL Beauty, Plus Her Fearless Approach To Hair & Makeup
By Erin Stovall
Get Even More From Bustle — Sign Up For The Newsletter