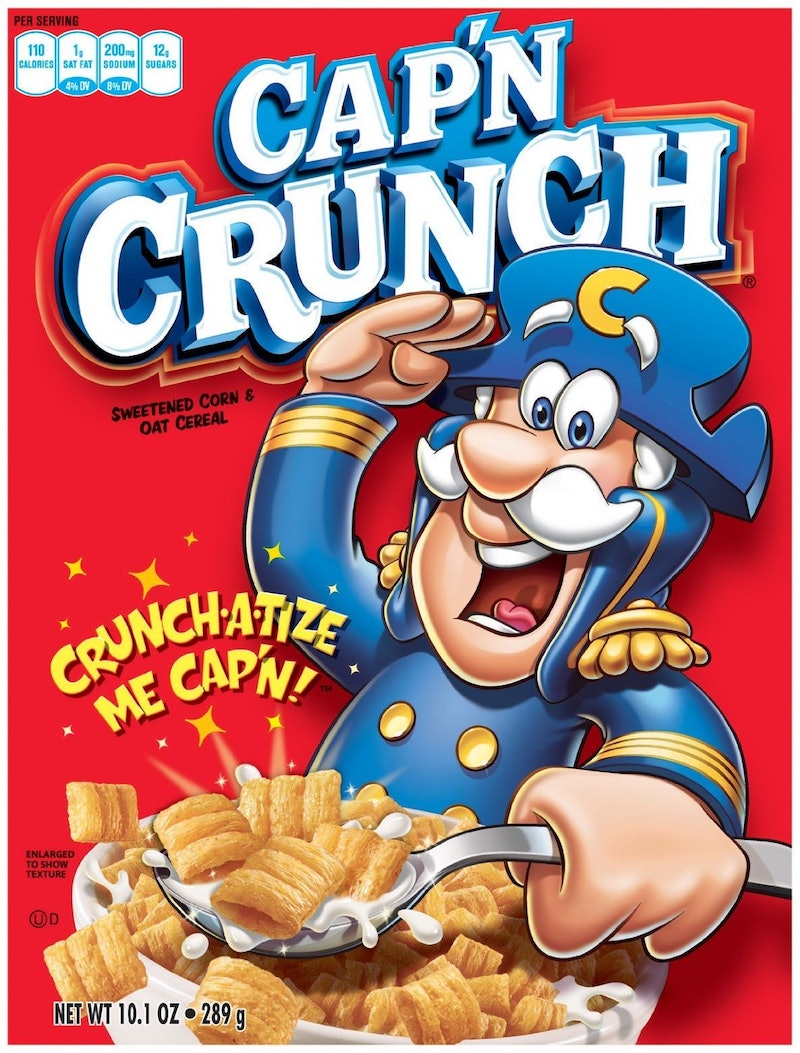 In a scandal that might shatter your entire existence, it's been revealed that celebrated breakfast hero Cap'n Crunch is living a lie and dragging all of us down with him: Cap'n Crunch is a commander, not a captain. Since the cereal was introduced in 1963, its jolly mascot has been going around calling himself a captain and saying captain-y things like "All hands on deck!" Last year, a food blogger discovered that he doesn't deserve to be called Cap'n at all.

A Foodbeast blogger made the history-changing discovery that Cap'n Crunch's uniform only has three stripes on the cuffs. Three stripes! A Naval captain's uniform actually has four stripes. Three stripes are for commanders. So what's the deal, "Cap'n" Crunch? Is Crunch even your real last name?

The Wall Street Journal decided to probe deeper into this monumental scandal by launching an investigation with the cooperation of the U.S. Navy and the Pentagon. "We have no Cap’n Crunch in the personnel records — and we checked," Lt. Commander Chris Servello, director of the U.S. Navy’s news desk at the Pentagon, told WSJ. "We have notified NCIS and we’re looking into whether or not he’s impersonating a naval officer — and that’s a serious offense."

Not only is this a serious offense for the U.S. military, but think of the children. Their young and impressionable minds don't deserve to be subjected to these lies. They're already being hypnotized by the Cap'n's blank, soulless stare every time they go to the grocery store. How much more can they take? What will these cereal corporations tell them next? That they allowed that poor rabbit to have Trix once in a while? Just ask his therapist if that's really true.

Even after the shocking uniform discovery and WSJ's investigation, Cap'n Crunch refused to admit to his fraudulent ways. The guy had the nerve to tweet flimsy defenses that were slightly mocking in tone.

Now that this alarming truth has been unearthed, it made us wonder what other terrifying facts are lurking beneath the surface of Cap'n America's sugary facade.

(If that didn't make you shudder, then you may not be human.)

More like this
15 Black-Owned Liquor & Wine Brands To Add To Your Bar Cart
By Alexis Morillo
12 Aphrodisiac Desserts To Spice Up Your Valentine’s Day
By Kaitlyn Wylde
Learning To Love, Not Judge, The Lunchbox Wives Of TikTok
By Esther Zuckerman
16 Trader Joe's Appetizers That Are Total Party-Pleasers
By Kaitlyn Wylde
Get Even More From Bustle — Sign Up For The Newsletter
From hair trends to relationship advice, our daily newsletter has everything you need to sound like a person who’s on TikTok, even if you aren’t.