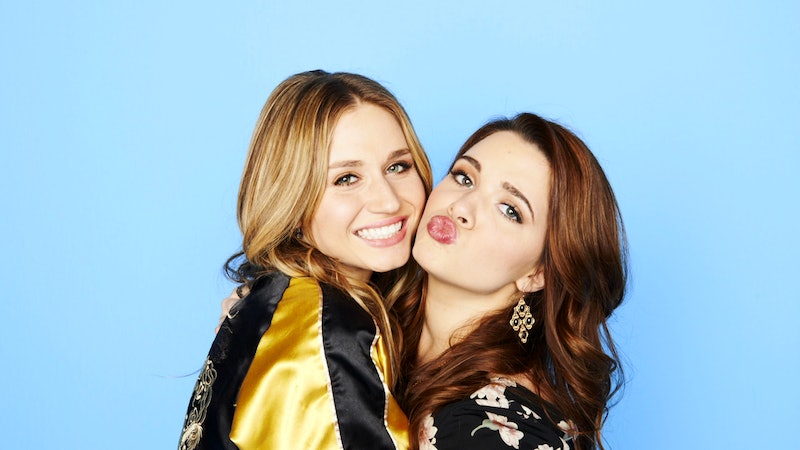 When Faking It first premiered earlier in April, MTV had us worried. It sounded like a sitcom that would sensationalize the LGBT community. The premise alone made me shudder, as two pretty best friends pose as lesbians to gain popularity in their high school. Not only does the show sound like thirty minutes of unadulterated homophobia, but it also sounds inaccurate to what their experience would be in real life. But then I watched it and now, just a few weeks later, I'm such a big fan that I was thrilled to hear MTV renewed Faking It for a second season.

As it turns out, not only is Faking It not as bad as we first imagined, but it's actually a good show — and it's going to do awesome things for the real LGBT teens who are being bullied in their high schools. It's not just about those two pretty best friends, because one of them, Amy, has come to realize that she actually might be gay. The viewers at home are able to see the internal struggle this causes her, as well as her attempts to fit into the lesbian community when she feels it's somewhere she just doesn't belong.

And for those who have seen the light and fallen in love with Faking It, it's a good day. Although the season finale airs Tuesday night, it's not the end of our new favorite show — it's just the beginning. Faking It has officially become MTV's highest rated new show and if viewers continue to show up, we could have another Awkward on our hands— especially since the higher ups at the network like what they see.

And so am I. I think Faking It could do amazing things for the younger LGBT crowd who are grappling with coming out. In the Faking It universe, being gay is cool. Because it is. Being gay is cool, being straight is cool — wherever you fall on the sliding scale of sexuality is cool. Now if only the rest of real world society could catch up with that of Faking It and realize that for themselves.