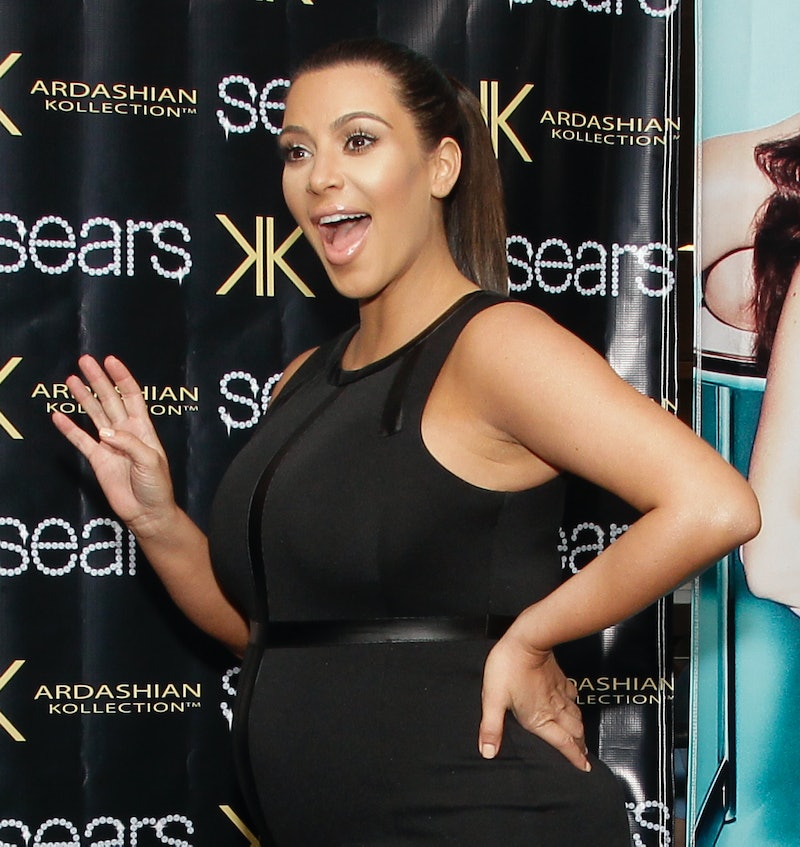 Over at Feminspire, Suchi Sundaram makes an impassioned case as to why Kim Kardashian is the forgotten face of feminism. While Sundaram certainly has an interesting argument, I don't think that her dissection of the image of America's most notorious new mom means you'll be seeing Kardashian's face in tandem with the women's liberation symbol anytime soon.

Sundaram writes of how seeing an exhibit of Jean-Paul Gaultier's clothing forced her to reexamine her perceptions about liberation, power and femininity, something she calls the "Gaultier concept." She then sees a photo of Kim Kardashian wearing a corset (or a corset-like dress?), and realizes that Kardashian's place in our modern society is similar to that of Helen of Troy: Two women who are able to manipulate despite their restrictions, aka their "corsets." Of Kim, she says:

Her dedication to marketing her body and gaining thousands of endorsements confuse our interpretation of America’s equality clause. How can a woman that uses her “stupidity” and a negatively perceived show earn one of the highest salaries of the year? How can we be addicted to following her every move, laughing at her trivial concerns? We blame America’s rating system and its lack of interest in intelligent media these days, but I think it is more complicated than that. She has become our modern day Helen. Our modern day retelling of the “face that launched a thousand” cameras.

From her choice to publicize a sex scandal to her display as a sex symbol, she has exemplified the Gaultier corset. Her intellect, similar to Helen’s, is exemplified through the multitudes of endorsements and the success of her reality television show. Although we constantly disregard her intelligence and blame the American consumer society as reasons for her rise to fame, she does play a role in this scenario. She marketed herself to fit the needs of the consumer society.

Although I agree with Sundaram that Kardashian is smart and powerful, I think it's dangerous to conflate feminism with power. While the two things are, obviously, not divorced from one another, being aware of your power as a woman does not make you a feminist. Neither does marketing yourself, or your body, or your beauty. Worth noting: I don't necessarily consider it antifeminist for Kardashian to profit from her body and sexuality and to use them to garner respect and clout, but that doesn't mean it's not problematic, either. I also don't think it makes any sense to conflate feminism with being media savvy, with marketing. Although it's great that Kardashian knows how to manipulate her own image, the ongoing public conversation about her body (beginning with her famous ass and continuing into the reprehensible media body-shaming she received when pregnant) proves that Kardashian's presence in the public eye is just another example of how obsessed our society is with the way women look. Sure, she "embraces her curves," but the fact that Kardashian and her sisters endorse a sketchy weight loss drug belies that Kim's desire to change the perception about acceptable women's bodies is merely a monetary one.

My understanding of feminism, at least, requires that people who are feminists or who are considered feminist role models have some kind of belief in equality for all people, some desire to expose, challenge and abolish sexism and misogyny. That's not to say that Kardashian doesn't have those goals or those beliefs. But here's the thing about Kim: Even the most devoted Keeping Up With The Kardashians watchers don't have any real insight into her personality or her belief system. Kardashian's entire life is orchestrated for maximum publicity and profitability, minimum scandal (despite her relationship with Kanye West, king of media brouhahas). For Kim to stay popular and famous, it's imperative that she not offend anyone with her opinions or her choices. Her job is to look pretty and get people talking about her, not because of her views or beliefs, but because of her personal life. Kardashian does that well. She looks pretty, she wears clothes, she marries and divorces people, she has a baby; She doesn't do anything that can be considered a feminist act or statement. I guess you could argue that her unabashed owning of her questionable choices, like cashing in on her sex tape or marrying Kris Humphries, is a way that she challenges conventional stereotypes of acceptable behavior for women, but I think that's a stretch at best.

Although some might argue Kim is a thwarter to the feminist movement, I believe that she has exemplified a different mode of feminism. A feminism that is not criticized as being an overzealous method of attack by battalions but rather a feminism that is defined by physical and intellectual presence. It has reinvented feminism to be a complex kaleidoscope rather than the movement brought on by Pankhurst and other militant feminists. Due to the society that has changed its norm of seeing women as symbols as human beings, we are allowed to view these individuals as having different perspectives of feminism. Even though all might not agree with each other, I believe that these differing outlooks have provided a broader context and individuality that feminism in earlier years did not strike.

While I definitely don't think there's only one way to be a feminist, Sundaram's evidence that Kim Kardashian proves that feminism is now a "complex kaleidoscope" seems to me to be a strange postfeminist read that blatantly ignores the ways that Kardashian and her persona continue to contribute to societal strains that hurt and undermine women. Not everyone needs to a be a "militant" feminist to enact societal change, but in a world where abortion rights are under attack, rape threats are rampant on Twitter, and women are still shamed for not being stick-thin two seconds after giving birth, I'd much rather we herald feminist role models who are, you know, actually doing things to advance the status of women in society. No offense to Kardashian, but there's about a million better feminist role models than she is, "Gaultier concept," corset, or not.

More like this
How To Fight For Reproductive Rights, Based On How Much Time You Have
By Courtney Young
Sandra Bullock, Girlboss Extraordinaire
By Matt Harkins & Viviana Olen
Amy Schumer Is Actually The Other Kardashian Sister You Never Knew About
By Jake Viswanath
Kim Kardashian Joked That Her Wedding To Kris Humphries Was A “Gay Wedding”
By Jake Viswanath
Get Even More From Bustle — Sign Up For The Newsletter