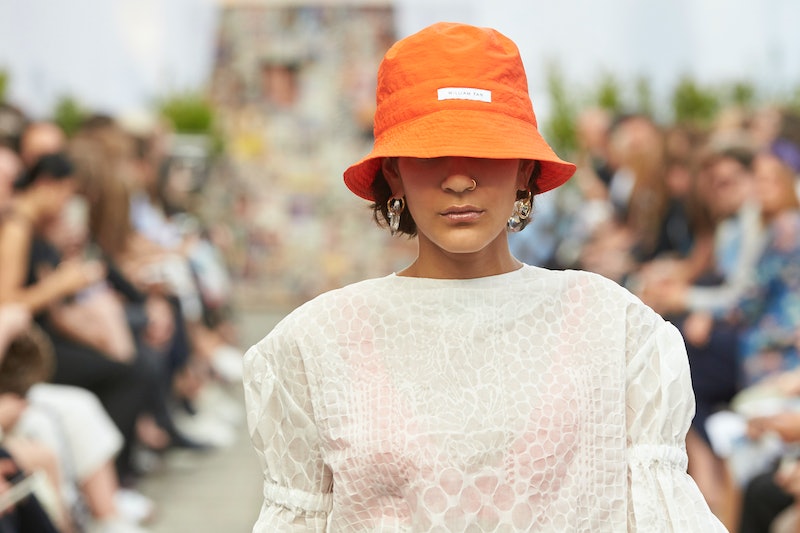 How the bucket hat became a symbol of cool is beyond me. The shapeless, often-wrinkled, vaguely floppy brim? The garish colors and weird floral prints? The fact that men tend to embrace them wholeheartedly as though one bucket hat cancels out a host of sartorial sins? It's all a mystery, and it ain't pretty.

Today, bucket hats are a major #ThrowbackThursday statement. A few decades ago, they were beloved by both tween icons and rap gods. But the history of the bucket hat is drenched in sweat and mud, not sequins and swagger. As with many now-trendy items, the bucket hat was born out of necessity, as opposed to glamor. But then it got popular real fast. Did somebody say social climber?

According to both MTV and Complex, the bucket hat originated in the 1940s, during the Israeli War of Independence. The Israeli Defense Force needed a portable way to protect themselves from the blazing sun, so the wide, floppy-brimmed bucket hat was born, utilitarian to its floppy core. (Note that my personal favorite site, HatCountry.com, claims that bucket hats originated in Ireland and were used by fisherman to keep rain and sun out of their faces.)

Either way, the bucket hat quickly became the headgear of choice for outdoorsy people, due to its foldable qualities, major sun blocking skills, and the fact that you could store useful objects — like fishing lures or small bites of PowerBars — on its brim.

But after a few peaceful decades of being worn only by soldiers and those who love to fish, the bucket hat began its strange climb to the top.

In the 1960s, it took over Gilligan's Island, appearing near-constantly on Gilligan's sweaty head. Don't get me wrong, it wasn't exactly cool then, it was just — very visible.

Unsatisfied with its innocent TV status, the bucket hat faced the 1980s boldly by taking a wild leap into the rap scene. In fact, rappers and bucket hats are so mysteriously made for each other that the hat still appears on rappers today (see Chris Brown's latest music video, "Loyal"). Big Bank Hank, LL Cool J, Earl Sweatshirt, Schoolboy Q, Cam'ron, Ghostface Killah — the list of rappers who love the bucket hat stretches on and on.

Once the '90s hit and kids everywhere were wearing tattoo choker necklaces and Steve Madden sandals, the bucket hat made another inexplicable cultural leap — this time into the bubblegum pink, Clinique "Happy"-drenched sector of tween pop culture. Suddenly, we saw bucket hats in everything from Britney Spears' immortal movie, Crossroads…

…to the Olsen twins slightly-less-immortal movie, Winning London. Somehow, someway, the bucket hat had become the hip topper for the tween set.

Thanks to recent major social appearances on celebrities like Rihanna, Justin Bieber, and Miley Cyrus, the bucket hat has managed to weasel its way back into our collective consciousness. Want proof? Let's just say that the term "bucket hat" gets twenty-eight results on Asos.com.

What do you think? Has this maneuvering little piece of headwear convinced you of its merits? If you're craving an authentic bucket hat, you can find plenty of '90s toppers on Etsy. Of course, if you'd really like to honor the history of this weird social climber, you'll want to get an genuine Army bucket hat — and hang out somewhere where the sun is scorching.

More like this
All Of 2023's Biggest Nail Art Trends, According To Top Manicurists
By Jordan Murray
'Love Island's Will Got A Farm Animal Manicure & It's *Adorable*
By Sam Ramsden
Kendall Jenner’s Colored Tights Prove That Cheugy Can Be Chic
By Alyssa Lapid
Olivia Rodrigo’s Grammys After-Party Dress Was Sequined Perfection
By Alyssa Lapid
Get Even More From Bustle — Sign Up For The Newsletter
From hair trends to relationship advice, our daily newsletter has everything you need to sound like a person who’s on TikTok, even if you aren’t.