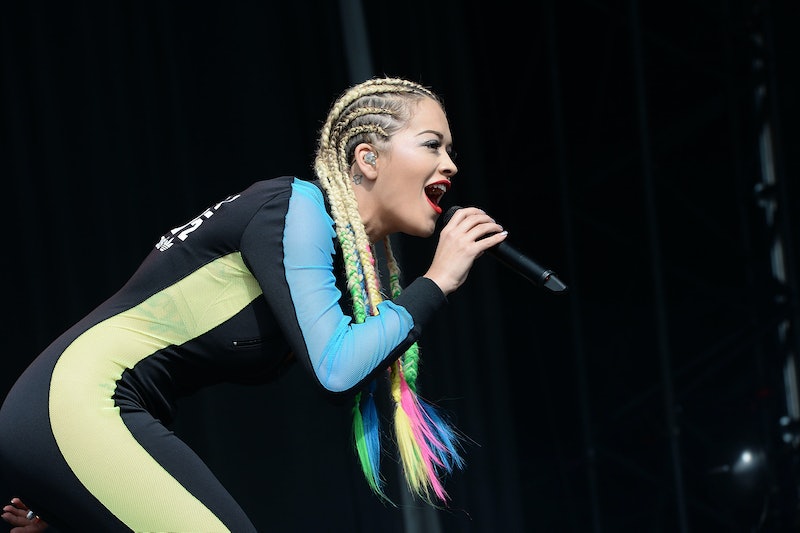 Rita Ora, the Jay Z protege oft accused of copying Rihanna's style, the ex-girlfriend of DJ Calvin Harris, and a legit singer with No. 1 singles in her homeland of England, is better known for her style than her music in the U.S. It's unfortunate, since Ora, who is of Kosovar-Albanian heritage, doles out semi-urban pop jams that take up residence in my cranium for days on end. Plus, she can sing, unlike a lot of her peers. If you've not heard "How We Do," then I implore you to check it out immediately. Actually, I implore you to check it out after you read this post. Go here to listen to the song and watch the video, but do that later.

The truth is most of America recognizes Ora for her tattoos, her fashion endorsements and appearances (Madonna's Material Girl, DKNY, Moschino), and her relationships, the most famous of which was with Rob Kardashian, who rolled her on Twitter and accused her of cheating and dating him to advance her career. It was nasty stuff, but honestly, Ora is a fashion plate first and a singer second, at least in my mind. So while I hurry up and impatiently wait for her next album to crash American shores (it's allegedly finally coming out this year), I'm happy to relive some of her hottest looks, of which there are many.

These are eight of Ora's unforgettable fashion forays, many of which happened this year and last. Pay attention to the details, since that is often where she goes right.

Ora donned this dangerously see-through, feathered frock at the Take-Two E-3 event just this week in Hollywood. I see London, I see France, I think I see Rita Ora's underpants. Or where her undies are supposed to be. That said, red-painted lips are an Ora staple and the scarlet pout popped with the straight strands.

Sideboob and pockets?! This floor-skimming black gown by Barbara Casasola hit two trend points at once. Ora had to send up a prayer of thanks to the fashion gods for double-sided tape because without it, she wouldn't have just been courting a nip slip. She'd have been full on committed to it, with invites sent and a honeymoon on the horizon.

3. Pretty as a Princess in Marchesa at 2014 ELLE Style Awards

Ora was frilly and frothy in this poufy Marchesa gown, which she wore earlier this year. The tiered gown gained an edge thanks to the black belt and Ora's pushback. Without those elements, it may have been too fluffy. Notice, the only skin she showed was on her hands and face.

4. Channeling Marilyn Monroe at the 2013 EMAs

The low-cut bodice and higher-than-the-thigh slit made this simple, body-con dress even sexier. The scarlet lips, the white-hot waves, and Ora's curvy frame paid obvious and literal homage to the late, great Marilyn Monroe at the 2013 EMAs. Someone had to, right?

5. Anything But Mellow in Yellow Prada at 2014 BRITs

Ora's college textbook highlighter yellow Prada gown was another fashion exercise where a simple silhouette that flaunted her curves was elevated to fashion-forward thanks to the details. The bejeweled straps and her sultry, smoldering, and smoky eye makeup added mystique and flair.

This champagne-hued Donna Karan gown showed a lot of thigh, a little bit of her undies, and landed Ora on several "worst dressed" lists for this year's Met Ball. It was as risky and as out there as anything Rihanna would wear. While it was not a favorite of the evening, it wasn't forgettable, thanks to its semi-punk take on Victoriana with those over-the-knee strappy heels.

7. Shimmery in Golden Green Lanvin at the 2014 Grammys

Ora's shimmering, gold and green Lanvin cocktail dress, worn to the 2014 Grammys, showed off her gams, covered up her arms, and further established her as a style star. She doesn't do this shape often, but when she does...

Yes, that dress had a train to rival most wedding gowns. The feathery Alexandre Vauthier frock was a statement at the 2013 VMAs. It was way dressy for what is usually a more casual event but it was Ora announcing that she has, in fact, arrived. Again, the ankle strap, the black belt and her sophisticated bob were elements that kept it fashionable, as opposed to sorta silly for the VMAs.

BTW, Ora also recently got a new tattoo. She is decorated with lots of ink, and her latest is a delicate ballerina, which was hand-drawn by her tattooist. It's a lovely and femme addition to her growing collection. Those almond-shaped, dagger nails are another of her signatures.

More like this
Everything To Know About Taylor Swift’s 10th Studio Album, 'Midnights'
By Grace Wehniainen and Jake Viswanath
Nicola Coughlan Channelled 'Bridgerton' Chic At London Fashion Week
By El Hunt
Kate Middleton's Tribute To The Queen Also Had A Connection To Princess Diana
By Sam Ramsden
The Royals Must Follow Strict Fashion Etiquette For The Queen’s Funeral
By Darshita Goyal
Get Even More From Bustle — Sign Up For The Newsletter