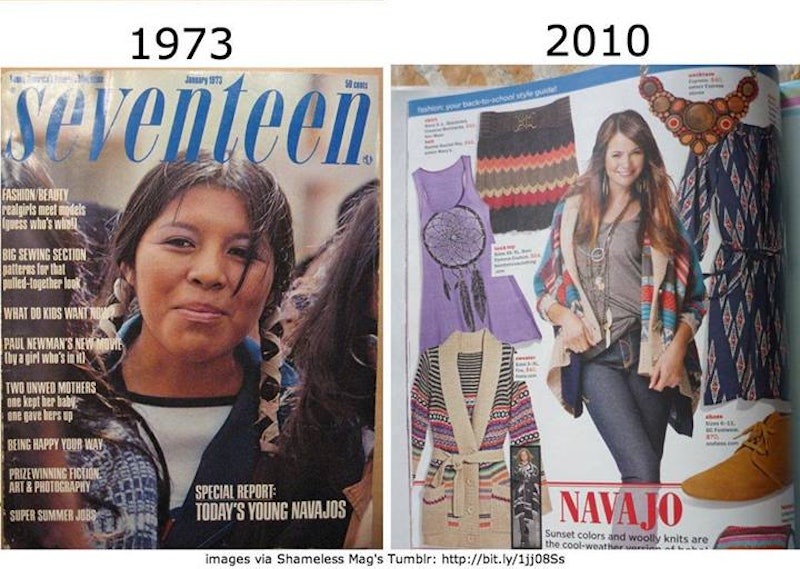 It's only been a little over a week since the Internet blew up over the Native American headress Pharrell wore on ELLE UK's July Issue. But due to a recent discovery made by Shameless Magazine 's tumblr, the topic of Native American appropriation is on the table yet again.

The tumblr posted a cover of Seventeen magazine from 1973, in which the cover story was titled "Today's Young Navajos" and featured a pretty, smiley Navajo teenager as the cover star. Flash-forward to 2010 when the same magazine featured a one-page fashion spread titled "Navajo," featuring a pretty white woman wearing a printed sweater, feather necklaces and ornamental hoops. On the same page, Seventeen also included a handful of "sunset colors and woolly knits," all lumped together as Navajo.

It was pretty groundbreaking for a mainstream magazine to feature an indigenous woman on their cover back in 1973. But sadly, instead of going forward, it appears as though Seventeen — along with the rest of the world — has regressed in being respectful towards the Native American community. Granted, this was four years ago, but it's recent enough to make me feel a little uncomfortable.

Bitch Media posted the above cover comparison on their Facebook page, sparking a heated discussion. One commenter said it best with the following comment: "Calling a bunch of random patterns 'Navajo' (or 'tribal' or 'ethnic' or 'exotic' or any of the other bothersome and tired phrases that the fashion world uses) is stepping on someone's culture." Another user chimed in saying, "You know, it's not so much the style that makes me upset as it is the part where they labelled it "Navajo". It reduces a whole culture to some prints that are, at most, inspired by general Native cultures. However, what makes me really sad is that instead of showing girls examples of real women, including those from different cultures, the magazine focuses solely on beauty and boys." Again, remember, this is from 2010 — I'm a little too old to be an avid Seventeen reader, but it's entirely possible they haven't made the mistake since then.

These covers not only started a debate about how offensive it is for young people to prance around in another community's garb without an ounce of knowledge about their culture — it also brought to light the kind of content our generation of young girls are consuming. Instead of learning about the real navajo culture (like they could've in 1973), they're seeing pictures of clothes that are labeled completely wrong.

But that brings us to another point of discussion — what is fashion without being inspired by other cultures? From gaucho pants to kimonos, it seems our closets would be totally boring if designers weren't influenced by fashions from other countries, right? So, how can we know whether we're going about borrowing something from other cultures correctly and, most importantly, respectfully?

TIME writer Susan Scafidi suggests asking yourself the following questions before you put on an item from another culture: "What’s the significance of the necklace you’re about to put on: is it just jewelry or a set of prayer beads? Did the source community invite you to wear that traditional robe, perhaps via voluntary sale, and does the community still suffer from a history of exploitation, discrimination or oppression? And how similar is that designer adaptation to the original: a head-to-toe copy, or just a nod in the direction of silhouette or pattern?"

The fact of the matter is just because you have a friend from Native American descent who isn't bothered by your "tribal-printed" sweater doesn't mean an entire culture at large is OK with it. Because it's more than apparent that they're not. Wearing headdresses or fringed moccasin boots to a music festival is just as offensive as it is to be a supporter of the Washington Redskins' team name. Just this past week, opponents of the football team ran an ad during the NBA finals calling fans for their support in changing the mascot. Fashion, football, everyone — it's not too late to stop the misappropriation of the Native American culture.