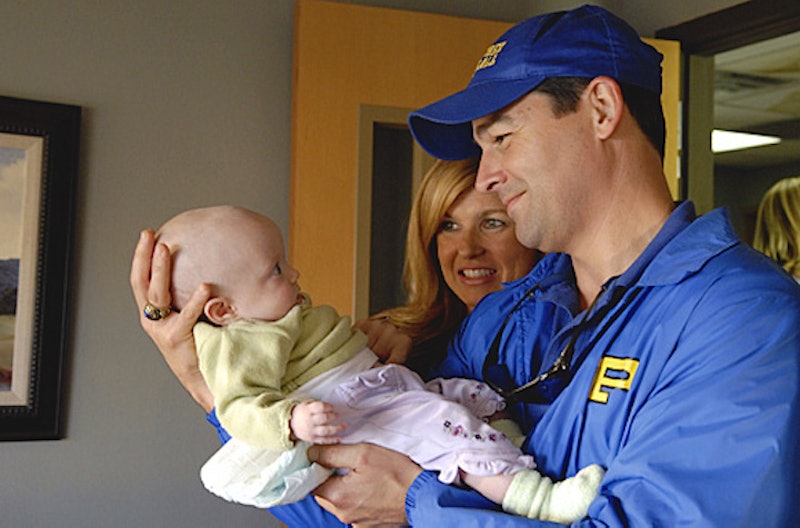 When I was a junior in high school, I moved out of my father's apartment. I left a four-page letter for him, packed up my favorite clothes, and moved full time into my mom's house. My parents were divorced and swapping houses every few days and forgetting textbooks and homework assignments was getting old, but more than anything, I was convinced my father was crushing me and everything I ever hoped to do under his thumb. So I left and in the process, I completely broke my dad's heart.

It wasn't until I was 26 and I had finished Friday Night Lights , a show my friends had been begging me to watch for years, that I truly understood what he went through during my three years of disgruntled teenage stubbornness. One week in May, I got knocked out with a cold and binge-watched the small town misadventures of Coach Taylor and Co. on Netflix and while the drama of Tim Riggins' romance with Lyla Garitty kept from telling Netflix to pause between episodes, it was something else entirely that really stopped me in my languorous tracks: FNL explained fatherhood in a way no therapist or wise relative ever could. I watched Julie Taylor rebel against her father and Buddy Garrity fight with his daughter Lyla and slowly but surely, I finally understood what I'd put my father through — 10 years after our falling out.

Of course, I hadn't seen things from Coach's perspective when I made the decision to move out at age 16; I thought I was being an "adult." I was unhappy in a situation, so I made a decision to change my circumstances. It hit my father like a pick-up truck because when I was a child, my bond with my dad was unbreakable; for lack of a better term (seriously, someone get on that, stat) I was a Daddy's Girl. As is the case with so many young girls, teenage years hit and suddenly, that changed. My mother and I got close — so close that my friends at school called us The Gilmore Girls (as an avid fan of Rory Gilmore's antics, this was the highest praise I could imagine). But I began distancing myself from my dad and before too long, there was practically an ocean of misunderstanding between us.

My dad and I at Disneyland after our rough patch had passed.

He didn't understand my need (more realistically, my desire, but you know how teenage girls are) to hop in cars with my friends, smile at cute boys, wear trendy clothes instead of the stuff from Wal-Mart, and start looking at out-of-state colleges. The more I wanted independence, the tighter he held on. I felt stifled and smothered and misunderstood, so I bolted. And in all that laboring over the issue and in the time I took to write four pages (front and back), there was not a single second in which I thought about maybe trying to understand my father. It wouldn't be until I was 26 and living on the opposite side of the country that the lightbulb would finally go on while I was binge-watching a TV show on my MacBook.

While my father certainly wasn't the patriarch of my hometown, he didn't coach football, and didn't speak with a Texas twang, I found myself connecting Coach Taylor's despair over watching his daughter Julie grow up and rebel while forming a bond with his newborn daughter Gracie Bell. In that relationship I could finally see what I never understood: the pain of realizing that the tiny life my father once held in his hands would only be there temporarily. Eventually, that small, sweet person would grow and change and write a letter that hurt him immensely. Watching these universal growing pains through the lens of Kyle Chandler's incredible performance finally delivered the message: I got as close as I ever will to feeling what I made my father feel that cruel summer day.

Like the events that befall Julie and Coach Taylor, my issue wasn't simply that my father, like so many fathers, was tasked with a teenage daughter itching for independence. It was that my father, who prizes the family unit above all else, was watching his crumble before his eyes. When my parents first split, the family unit was ruptured and scattered, but by the time things settled and we had Dad's Home Base and Mom's Home Base, I was a full-fledged teenager with a job, a social life, and a raging case of boy crazy. I pulled away swiftly and harshly, not realizing that my father wasn't just an overprotective dad, but a man who needed his family in order to get through a trying time. Just when he thought he'd regained some sense of normalcy, I pulled a brick off of the foundation and when I moved out, the rest of the bricks came with me.

It's not entirely unlike Eric Taylor's move to East Dillon High — his world and everything he cares about crumbled and his daughter was changing the one thing he could take comfort in: His family. I watched as Coach didn't resent his daughter. He wasn't being harsh for harsh's sake. He wasn't dismissing her feelings — he was struggling to deal with feelings of his own and struggling to push forward while carrying that load. I realized that where I saw anger and tyranny as a teenager, there was actually an emotional struggle born out of love. In truth, what my father needed more than anything was for me to need him. That truth hit my like so many bricks when FNL hit that precious moment (below) when Julie and her father stole a few minutes to return to their quieting father-daughter bond. Watching that Season 5 moment, I couldn't hold back my tears. In this short scene, I felt the rush of emotions I felt upon repairing my relationship with my father, but with greater force than ever before.

Now, as a 26-year-old, my father and I have remedied our relationship. I know that he wasn't truly a tyrant and that my rash decision served to exacerbate the pain that would inevitably come along when I left for college. But as ridiculous as it sounds, I'll always cherish the way in which FNL gave me some perspective on what it's like to be a father to a teenage daughter. I can't ever retrieve those three wasted years of ignoring my dad, refusing to speak while sharing a meal, and general distrust and tension, but what I can do is understand what that period in time did to my father and resolve to never waste a single second with him. Call me cheesy and sentimental if you must, but when I think about my dad, the show's iconic line takes on a whole new meaning: Clear eyes. Full hearts. Can't lose a single moment.