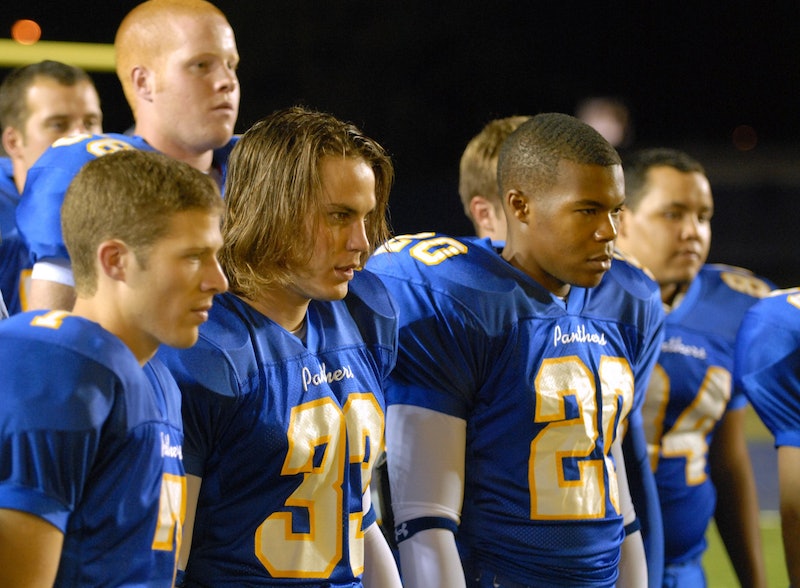 While you were sleeping late and watching marathons of Hocus Pocus on ABC Family all weekend, something amazing was happening at the house of one ex-Dillon Panther. Friday Night Lights alums Scott Porter (Jason), Gaius Charles (Smash), Zach Gilford (Matt), Matt Lauria (Luke) and Kevin Rankin (Herc) all reunited, making our already-full hearts soar and our clear eyes turn teary.

On Sunday evening, Porter tweeted about the "#SundayFunday" he was hosting at his house, and included a photo that featured a guy who looked an awful lot like our beloved Matt Saracen in the corner. We tried not to get our hopes up, but it was hard not to; the thought of two of our favorite FNL characters spending the day together as friends was amazing, but probably unrealistic. Less than an hour later, though, Porter posted the photo that changed everything: five members of the FNL cast, smiling and hugging like the picture wasn't about to make thousands of fans collectively freak out.

And we're not the only ones who are excited to see our favorite fake football players reunited. Before the event, Gilford sent this revealing tweet, which we can't believe we missed:

And alongside the photo, Porter wrote:

Charles soon followed up with a similar tweet of his own:

We're thrilled every time FNL alums reunite (remember when Landry played guitar at Matt's wedding?) especially when it seems — deep breath, here — increasingly unlikely that a movie version of the show is going to happen. It would've been nice to see Landry, Riggins, or any of the show's ladies join in on the fun, but then again, there's only so much FNL love we can take before our hearts explode.