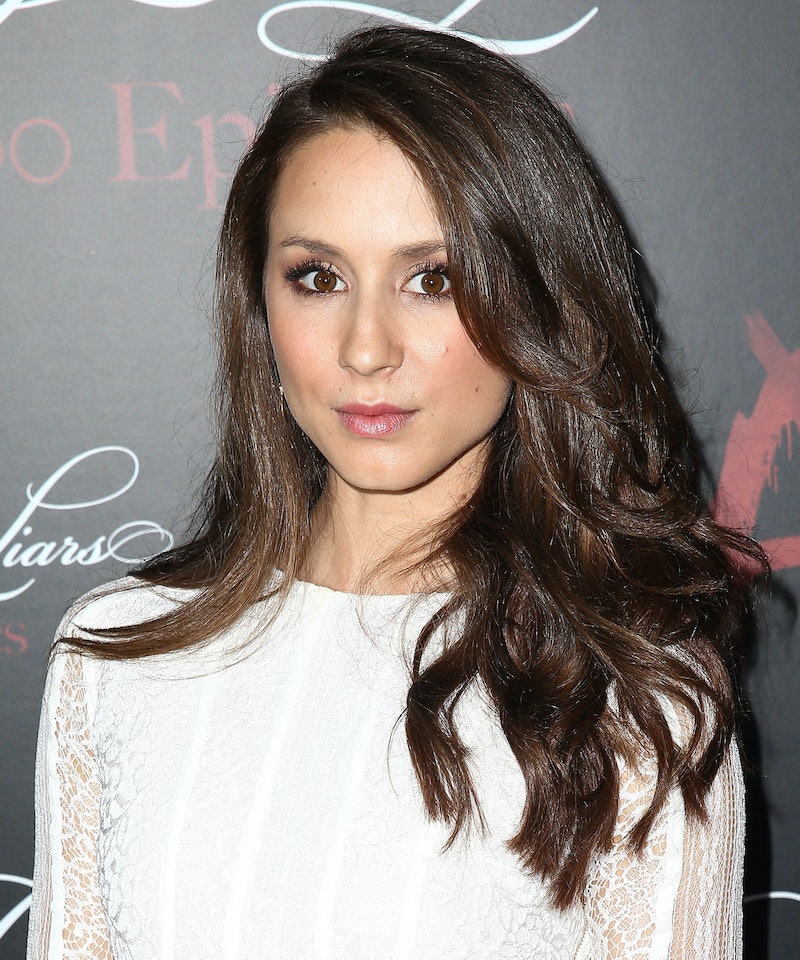 Are teen dramas your "guilty pleasure"? On Thursday, Troian Bellisario, star of ABC Family's wildly popular series Pretty Little Liars , which just had its Season 5 premiere, wrote a column for The Hollywood Reporter where she questioned why we write these teen series off as "fluff" and feel compelled to hide our fandom. Bellisario also implored Emmy voters to take teen shows more seriously and as a PLL and teen show lover, I have to agree.

I'm a huge fan of teen series. My DVR is set to record The Originals, The Vampire Diaries, Pretty Little Liars, and even Glee without fail every week and I've seen all of the episodes of The O.C., One Tree Hill, and Friday Night Lights more times than I can count. I'm not ashamed to tell friends and family that I choose to watch these programs and write about them over any sophisticated drama on AMC or HBO because there's merit to the storytelling and acting, just like there is on any "adult" drama.

The PLL star calls out the assertion that we're in the "golden age of television," and that we're praising series that push the envelope and tell stories in new, exciting ways. The 28-year-old actress writes:

So why is it that with all the different types of shows being recognized this Emmy season, the ones like mine, "teen shows," are written off as fluff? Guilty pleasures that are too youthful to exhibit accolade-worthy material. What if they are telling good stories too, just in a different way?

And she's right. Pretty Little Liars, for one, is addressing the issues of bullying and cyber-bulling and is bringing awareness to a truth that not everyone feels safe in high school. While Bellisario explains that she isn't trying to compare her series to the likes of nominated shows like Veep, Breaking Bad, and Girls and the different honesty they're exhibiting, she asks you to remember high school. Bellisario writes:

Many young men and women see something in their favorite teen show beyond the fashion, beyond the hair and the hashtags splattered across the screen: They see a version of their truth, their struggle to feel safe in high school, their loyalty to their best friend, their fear of their first broken heart. When a teenager likes a more mature show we congratulate them on their elevated taste, but when someone older enjoys a teen show, they hide it, they call it their "guilty pleasure."

If this is what we're looking for — a take on the reality of someone's situation, good or bad — what makes a show like Pretty Little Liars less worthy of being rewarded for its work than Mad Men? Because, while it might not be addressing your reality, it could be addressing the reality of your sister, brother, daughter, son, or friend. It's unfair to dumb it down by claiming that it's all about the superficial aspects, because Bellisario's Spencer Hastings isn't any less relatable than Walter White or Girls' Hannah. And yet, here we are — no Emmy nominations. Ever. The actress continues:

My castmates attack their craft with curiosity and depth. My writers, directors and cinematographers have figured out how to keep their finger on the pulse of an ever-maturing audience. They might be telling stories about an omniscient cyberbullying supervillain (I know, what?!?), but they are also writing about the psychology of adolescence. Just ask your daughter.

Yes, it's out-of-the-box and yes, sometimes PLL crosses into territory that's wildly unbelievable. But the underlying story is something we can all understand, because most of us have lived through high school. I'm equally drawn and emotionally affected by teen series like The Vampire Diaries, The Originals, and yes, PLL, as I am to House of Cards. It's not rare for the stars of these shows to exhibit exceptional range (just look at what Nina Dobrev did while playing three different doppelgängers on TVD Season 5) and bring a human element to an otherwise unbelievable story. So why are we not rewarding them with any type of acknowledgment outside of the Kids' Choice Awards?

Bellisario closed her argument by asserting she's absolutely NOT comparing herself to Bryan Cranston, but that the cast and crew of PLL strives to discover and expose the same human truths that critically acclaimed, Emmy-winning series do. The actress closed her column with a strong statement:

We are just beholden to a different style of storytelling. And that is also worthy of serious consideration.

We treat each and every series — outside of the teen genre — in a way that suits the type of category they fall into. So why can't we do the same for the likes of Pretty Little Liars and its fellow teen series? It's only fair that if, to quote Bellisario, "hyperfunny sitcoms" and musicals are considered within their contexts and style, we should be able to do the same for these "guilty pleasure shows."

And maybe, with the proper acknowledgement, we can get rid of this stigma altogether.