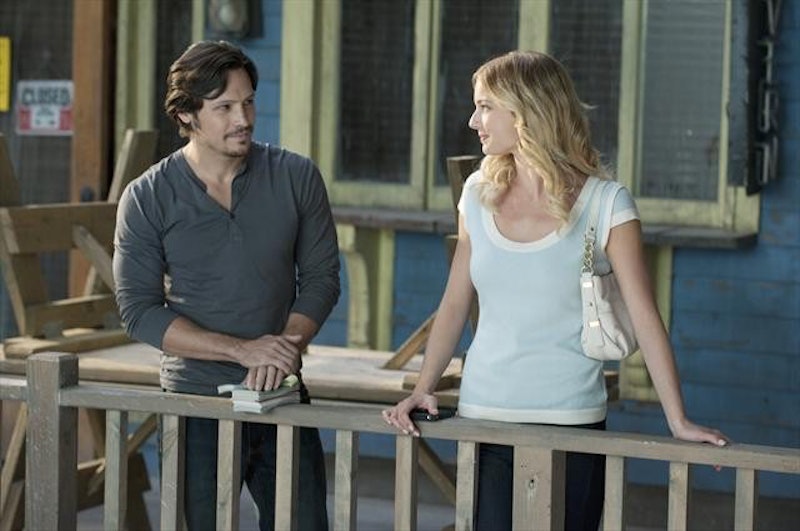 The open space in Emily's heart may soon be filled by another Revenge guy. The Season 3 finale of Revenge ended with the death of Emily's great love Aiden Mathis at the hands of her worst enemy, Victoria Grayson. Emily got her own version of revenge on Victoria by throwing her in a mental institution — a vengeance plot almost better than killing her off. Now that Emily has avenged Aiden's death — not to mention just about everything that happened to her father, David Clarke — it seems that Emily is ready to move on with her life... and that might just mean moving on with her longtime friend, Jack Porter.

According Zap2It's interview with star Nick Wechsler, Jack and Emily's shared experience — the loss of their romantic partners — will cause their relationship to deepen. Without Aiden or Amanda standing in the way, could this original pairing fall in love for real? We've seen the two toy with the idea of a potential romance (remember that kiss over Sammy's body?) but given the circumstances of the past two seasons, these two have never become anything more than just good friends.

And that's a good thing. Jack and Emily shouldn't be together — at least, not in a romantic sense. Here's why.

It makes sense that'd she'd be an emotional wreck, considering that her entire life has really been a parade of people screwing her over. Unfortunately, people with her serious trust issues don't tend to make the best girlfriends. Jack and Nolan are probably the two people she trusts more than anyone in the world, and she still feels the need to keep secrets from them on occasion. This issue isn't going to go away just because Jack gets bumped up to a romantic interest — if anything, Emily is going to have to work harder to keep secrets from him. If Emily made any progress in the "trusting people" department, that's all going to hell when she realizes that her father has been alive this entire time and never told her.

Emily Is About To Question Everything She Knows

David's return into Emily's life is opening up a whole new can of worms. After spending years plotting revenge on her father's behalf, Emily's going to have to deal with the fact that her own father was keeping secrets of his own... and maybe he's not as wholesome of a person as he led her to believe. (He did kill Conrad in cold blood, after all.) Instead of having Emily jump into a new relationship, she really should be focusing on this huge development — finding out David is alive will shake her very foundation and change everything.

Emily, Jack, and Nolan sometimes function as a trio, but — and I do mean this with no disrespect — what does Jack even bring to the table? Certainly not the tech skills nor witty banter that Nolan brings. Plus, whenever Emily is in a new relationship, her time with Nolan is dominated by conversations about Emily's love life. Just... no. No. The show is called Revenge, not Boy Problems With Nolan Ross. I'd rather watch Nolan and Emily plotting their takedown of the Graysons, not Emily dealing with the emotional turmoil of getting back in the dating game.

Their Relationship Could Put Jack In Danger

Even before Emily revealed herself to Jack as Amanda Clarke, Emily was already pseudo responsible for the death of both Jack's brother Declan and his wife "Amanda." (AKA the real Emily Thorne) who were entangled in the many intricacies of Emily's ultimate plan for revenge.

Remove Emily from the situation entirely and it's safe to say that these two would still be walking around Montauk. Emily's revenge plan comes with a whole lot of collateral damage, and Jack — or anyone he loves — could easily be next. Emily isn't built to put other people before her revenge plot — it's just not who she is. Even if she does fall head-over-heels for Jack in a real way and vows to protect him above all else, it doesn't mean that he'll be safe from harm. If anything, it puts him in more danger — he can be used as a pawn for the Graysons and anyone else out to hurt Emily.

Sorry, Emily & Jack shippers. These two are far better off as friends.