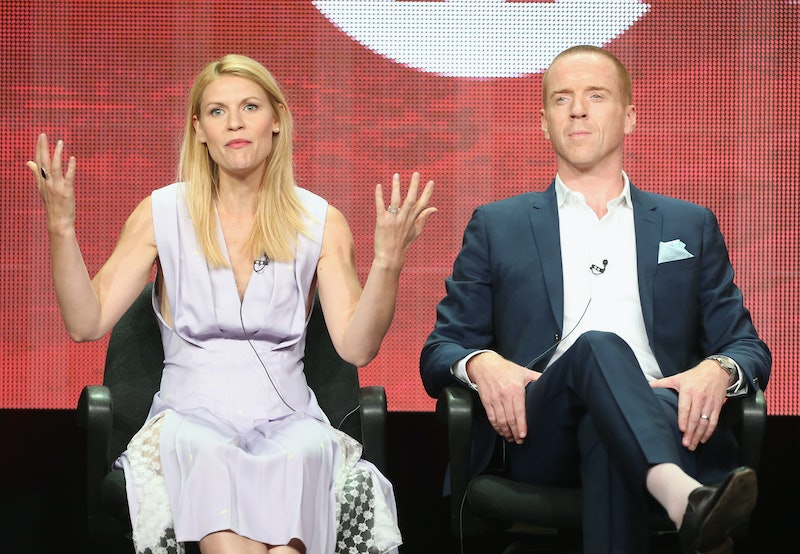 When Season 2 wrapped, an explosion had wiped out half the C.I.A. and Sergeant Brody had absconded to Canada, and after a Showtime press panel on Monday, we still don't know a lot about what to expect when Homeland Season 3 returns to Showtime on Sunday, September 29. What's going to happen to Carrie Mathinson, guys? Will she have more jazz freak-outs and save the world from terrorism ... again? Unfortunately, actress Claire Danes was pretty mum on the Season 3 subject, but she did, however, reveal some other interesting tiddly bits. Remember that Saturday Night Live skit with Anne Hathaway that parodied Homeland?

Yeah, well, Danes never watched it. After receiving a text from Hathaway, whom Danes says she's friendly with, which is to say, they're not like, friends friends, that apologized in advance for making fun of her performance as the bipolar Mathinson, Danes decided not to watch the skit.

... She sent me this big bouquet of flowers. And this is all before it aired and I was like, 'Oh, shit.' I don't know if I want to watch this. She's way too nice about it. Then I did get a little bit curious and I tried to look it up on my computer and I couldn't figure it out, because somehow being in Canada created some difficulty. And then time passed and I thought I enjoyed her flowers and I don't think I need to look at that.

Ah, poor Claire Bear! She should know that there's nothing to be afraid of. The skit wasn't that mean, and plus, let's be really, it's not like Anne Hathaway can really pull of humor that well. All she did was make fun of Danes' twitches and her bad blonde hair.

Danes does have a sense of pride about the sketch, though. She acknowledges that being parodied on SNL is an honor. You have to be cool and relevant to get the SNL treatment, and she gets that. But if she does wanna watch it then publicly decry Hathaway's performance, we're just going to go ahead and say upfront: Team Claire.

In case you missed it, here's the sketch: