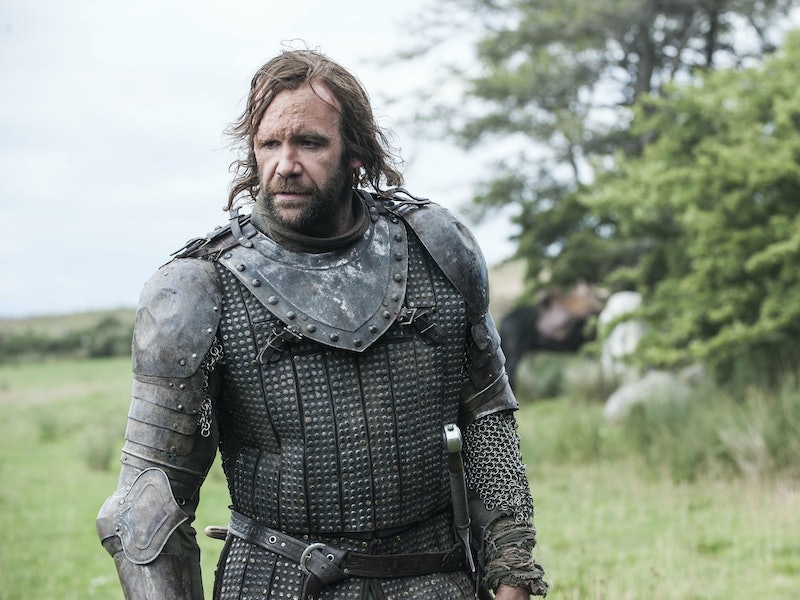 Ugh, well we all knew that Arya and The Hound couldn't be Game of Thrones besties for life, although, I bet you all wanted them to be (I totally did). Sadly, in the season finale of GoT, Arya and her reluctant protector finally had to say goodbye to each other (and it wasn't in the prettiest of situations). Brienne of Tarth and her kind-of-trusty-steed Podrick accidentally came to Arya's rescue, and the whole thing ended with Brienne and The Hound getting into one epic battle. Of course, we all knew who was going to come out victorious: Brienne. (Because she's the best knight anyone has ever seen and she deserves all of the glory.)

Anyways, what ends up happening is that Arya hides from Brienne and Podrick, and then goes to find The Hound. But because Brienne did a good number on him, he's in absolutely terrible shape. What then comes about is a totally endearing conversation between the beastly man and the daughter that he never had. We all know that under that scruffy beard and god-awful demeanor is a man who just wants to be loved, and he definitely showed that in his less-than-perfect speech to Arya. Instead of telling her to fuck off, he gives her some advice:

The Hound: Killed by a woman, I bet you liked that. Go on. Go after her. She'll help you. Going at it alone, you won't last a day out there.

Arya: I'll last longer than you.

Just the back-and-forth banter that we've come to love between the two of them.

Then, in a totally predictable move, The Hound asks Arya to kill him. He even goes as far as reminding her of all of the awful things he's done to her and the people she loves (because of course he would) just to get her to stab him in the heart, but because she doesn't want to give him an easy way out, she just takes his money and walks away into the unknown as he just shouts "kill me!" over and over again. (Sorry she's not sorry.)

But does this mean that he's actually going to die all alone? Or is this just a trick and he's totally going to show up next season? Unfortunately, no one knows yet — well, George R. R. Martin probably knows, but he's just not ready to tell us. As far as I can tell, the writers of GoT have already diverted from the books, and so it could be all up in the air. In the books, The Hound gets seriously injured during the fight with Polliver, but we already saw that fight, and he walks away with only a few scratches. However, besides the fights being different, both the books and the show leave the fans with Arya walking away from him. So, unfortunately, we can only cross our fingers and hope that the highly misunderstood beast will reappear and show a change of heart later on in the series.