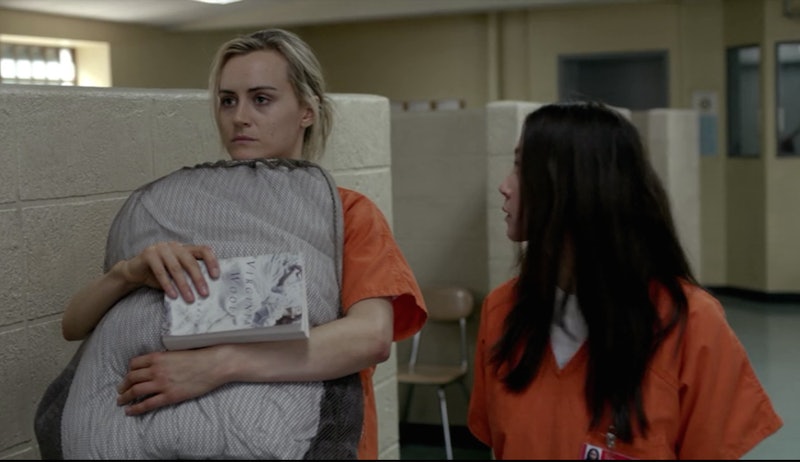 And as an avid bookie (and Netflix binge-watcher), I can’t help but notice all the literary references in Orange is the New Black — and with one quick peek around the Internet, I know I'm not alone. For instance, remember the time Piper got super-philosophical about “The Road Not Taken” by Robert Frost? Or the fact that she had a copy of Orlando (look at that photo above!)? Or that she had to rescue her copy of Atonement? The list goes on and on — and that doesn't even count all the time the other characters spent with books. But let's focus on Piper for a second: Miss Chapman is a bookworm through and through, and because Jenji Kohan likes to employ literature as not-so subtle thematic devices, I thought it would be fun to compile a list of books Piper probably has either read, or is most definitely planning on reading (as soon as her parents send her a prison care package, of course).

These titles are culled from her tastes in both seasons, and her time spent both inside and outside prison walls. Here are 15 plausible Piper Reads, and exactly why she'd spend time with her nose buried in their pages.

What is a better time than your prison sentence to tackle this massive tome? You may have started and stopped this book 15 times, but that’s okay — it's a pretty tremendous undertaking and not just because of its length. Piper probably wanted to read this book in college, or even post-college, but instead got pretty swept up in Alex Vause and co. Now she has all the time in the world to enjoy enormous sentences, and the quintessential, maddening, obsessive-compulsive ideas about entertainment.

2. The Book Thief by Markus Zusak

... get it? Piper gets her books stolen. Okay, this one also fits because a World War II novel may make Piper put her situation into perspective. She may also want to read this book before she sees the movie, right?

There is no way college Piper didn’t read some Kathy Acker. Bluntly sexual, vivid, and pretty weird, Acker’s work is practically the First Testament when it comes to sex and gender studies. What was Piper's major in college, again?

4. It’s All Good: Delicious Easy Recipes That Will Make You Look Good and Feel Great by Gwyneth Paltrow

In Season 1 Piper and Larry try the Master Cleanse, but Piper fails after... five minutes. It’s the thought that counts, I suppose. Maybe with some extra time, Piper can tap into the brain of a health-conscious extremist. Although Piper may be bothered that Paltrow describes her life as “stressful and tiring,” I think we can all learn some valuable health lessons here. Like, swapping sugar with real maple syrup is expensive but maybe more healthy, and ditching the meat is sad but possibly more energizing. Not that Piper can really afford those luxuries in prison, but hey.

Piper quotes Neruda at some point in Season 1, because of course. Neruda’s poetry is comforting, and pretty, and everything you would hope and dream of learning and tattooing on your body if you went to a liberal arts school. Piper may want to relive these fun, spiritual, and free times by thumbing through some stanzas.

6. East of Eden by John Steinbeck

[EARLY SEASON 2 SPOILER] For a white, Piper thinks she may have killed Pennsatucky, so her moral compass is a tad shaken. Is she good or bad? Rather, was she bad all along? Does prison merely reel out the evil that’s already there? These thoughts of inherent nature can also be found in one of the greatest novels of all time: East of Eden.

Piper Chapman definitely read The Rumpus every morning with her fair-trade coffee and soymilk, and if she did, she read Dear Sugar, everyone’s favorite advice columnist, right? Right.

8. A Game of Thrones by George R.R. Martin

Look, if I were sentenced to prison, the first thing I would do is call up my fiancé or parents, or anyone still speaking to me and request all of the Game of Thrones books. Piper and the rest of the ladies would be all over George R.R. Martin's books, since Fig and keepers of the mysterious Litchfield budget probably aren't fronting the cash for HBO.

Piper is an educated woman, and she is not about to let prison get in the way of her life-long learning. Guns, Germs, and Steel covers about 13,000 years of civilization, and it also enlightens those who want to know why certain countries conquered and why others were conquered.

10. One Hundred Years of Solitude by Gabriel Garcia Marquez

As many of us know, Marquez isn’t exactly prime material for some R&R on the beach while you slurp your overpriced margarita. No. Marquez is work. He takes patience. And ardor. All of which Piper has.

11. Even Cowgirls Get the Blues by Tom Robbins

Tom Robbins is weird and wonderful. How could you not totally immerse yourself in a book with characters like Sissy Hanshaw and Bonanza Jellybean? Cowgirls Get the Blues is about female community, girl power, relationships, and hitchhiking. It’s made for Piper, as well as every woman in Litchfield.

12. Candy Girl: A Year in the Life of an Unlikely Stripper by Diablo Cody

Piper has definitely seen Juno. And maybe The United States of Tara. So, she must be down to read Diablo Cody’s exposé/temporary life reinvention. Much like Piper, Cody seems to waver between two conflicting personas: one that goes with the flow of her standard life, and another that is willing to take chances and live and let die. Okay, maybe Diablo Cody and Piper Chapman are kind of different. But I bet Piper would be more than interested to find out what it’s like being a stripper.

13. How to Be Alone by Jonathan Franzen

Obviously Piper had a lot of time to reflect on her deeds while she was in The Shoe. She also probably thought about other pertinent, valuable things in life: technology, family, the status of literature. All things discussed in How to Be Alone in a mildly esoteric fashion that Piper may enjoy.

14. The Stranger by Albert Camus

Another perfect Shoe read. If you haven’t read The Stranger (seriously, go do it — it’s French and stark and beautiful), it’s about a guy who murders another person because he just doesn’t really care about the future because what is future? Also see: existentialism. Are these things Piper thinks about? Probably. Do our actions really come with real consequences? Does it really matter about what will happen tomorrow?

15. The Casual Vacancy by J.K. Rowling

Since Tastee probably has dibs on all the Harry Potter books in the library, Piper will have to have this one shipped to her from Amazon (or Powell's, ahem), or her parents. Although she may consider herself to old to be reading wizard fantasy, The Casual Vacancy is a whole different story. This chaotic plot may be everything Piper needs and more in order for her to get her mind off things. Because no matter what, they just keep getting crazier and crazier.