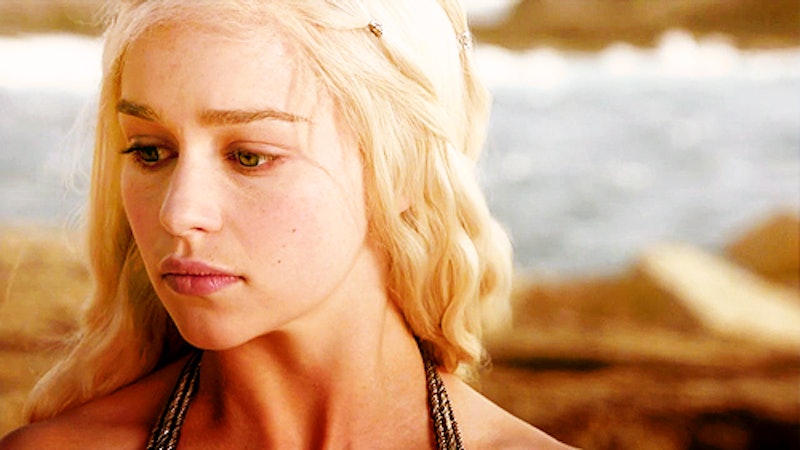 While there is plenty of fashion on Game of Thrones that I'd love to imitate, I'm constantly in awe of those people who create their own versions of the outfits on the show. Who has the time and the sewing talent to directly copy a garment off a television screen? Daenerys Targaryen look-alike Lucy Hinsley does, apparently, and she's damn great at it — which is a good thing, given that she breaks the (Iron) bank to make it happen.

Hinsley, who hails from Brighton, England, became a fan of Game of Thrones when the show first aired in 2011. Daenerys Targaryen's journey from abused younger sister to commanding Khaleesi made a strong impression on Hinsley, who was bullied by classmates growing up. Hinsley told The Daily Mail:

I had a tough time as a child — it was hard to deal with the constant bullying. I faded into the background and didn’t want to speak to anyone. In retrospect, I was exactly like Daenerys at the start of Game of Thrones when she is intimidated by her brother, Viserys Targaryen. In a parallel way, I was intimated by my classmates at school but eventually I would come out of my shell just like Daenerys.

In 2012, a friend told Hinsley that she resembled the mother of dragons. After that, her obsession with the character took off and she began spending time and money to imitate the character's look, often staying up until 5 a.m. working on a costume. She debuted her new look at London Comic Con in May 2012 to very positive responses from other fans, some of whom even mistook her for Emilia Clarke, who plays Daenerys in the series. "After all that time of being put down by bullies at school, it was so surreal getting admiration and acceptance for being Daenerys by people," Hinsey told Mail, "I was almost scared to believe their complements. I was just elated!"

How pricey is it to become Daenerys Targaryen? Daily Mail broke it down and the figures are a bit staggering. To date, Lucy Hinsley has spent over $4,000 on hair dye and extensions, six costumes, two pairs of shoes, traveling costs, and additional Game of Thrones memorabilia. Damn.

Hinsley's story is actually kind of heartwarming, especially in an age where some women spend thousands of dollars on plastic surgery to closely resemble celebrities. That practice is disturbing, whereas Lucy Hinsley using her talents to make beautiful costumes in appreciation of her favorite fictional character is not. Still, I'd love for Hinsley to begin seeing her worth outside of the costumes. She doesn't need to mimic a fictional character in order to deserve love and attention, but that doesn't mean she should stop dressing up.