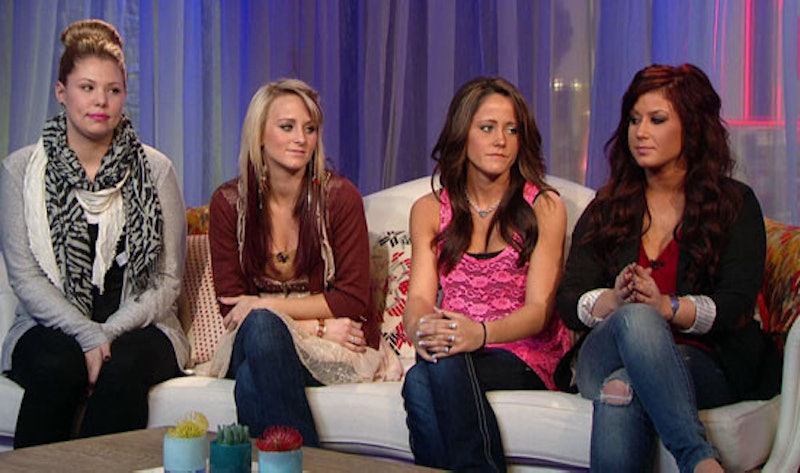 For everyone who likes their reality TV with a solid dose of actual reality added every few minutes, I have good news. MTV has released a trailer for the second half of Teen Mom 2 's fifth season and things seem to be fluctuating between super happy and completely awful, which is bad for the moms and their kids, but will undoubtedly make for a slew of interesting episodes. When the first half of Season 5 came to a close in April, Jenelle was pregnant and fighting with Nathan, Leah learned that Ali has a rare genetic condition, Chelsea took her final aesthetician test while fighting with Adam over custody of Aubrey, and Kailyn was raising her second baby and being annoyed at Jo for moving in with his girlfriend.

Based on the trailer, when Season 5 returns on July 16 most of those storylines will continue to unfold, with even more drama being added to the mix. From what we see of Jenelle, her and Nathan quickly go from excitement over the news that their baby will be a boy to worried about the fact that they're both facing jail time. Jenelle also expresses concern over Nathan's binge-drinking and, obviously, fights with her mom. Leah, meanwhile, is overwhelmed by Ali's medical bills and fighting with Jeremy, all while raising baby Addalyn.

Kailyn seems to be the most stable one, at least in the trailer, as she's shown playing with her kids and only minorly arguing with Javi. The big surprise from the trailer, however, comes with Chelsea and wow is it heartbreaking. Aubrey, usually Chelsea's mini-me, BFF, and daughter all rolled into one, screams to her mother that she doesn't like her anymore and throws her tiny tiara at her. Forget what's going on with the custody case, Adam's arrest, and his new baby, that has to be the hardest thing Chelsea goes through this season.

Of course the best part of the trailer, and Teen Mom 2 in general, is the kids, who are only getting cuter with age. We get to see each of the teen moms' kids, as well as new additions Lincoln and Addalyn, but there's a downside. It appears that the kids are in the room for much of that increased drama and in a few clips, even interfere in their parents' arguments. I'm sure when Dr. Drew hosts the usual reunion special, he'll share my concerns.

Head to MTV's website to watch the trailer for yourself and see what's in store for the moms and kids when Teen Mom 2 returns.

More like this
One Of 'Selling Sunset's New Cast Members Just Had A Baby With Nick Cannon
By Orla Pentelow and Brad Witter
'The Capture' Is Finally Back – & S2 Looks Tense AF
By Sophie McEvoy and El Hunt
Donald Glover’s Earn Returns Home in The 'Atlanta' Season 4 Trailer
By Kadin Burnett
What’s New On Netflix: 'Never Have I Ever' & 'Indian Matchmaking' Return
By Arya Roshanian
Get Even More From Bustle — Sign Up For The Newsletter