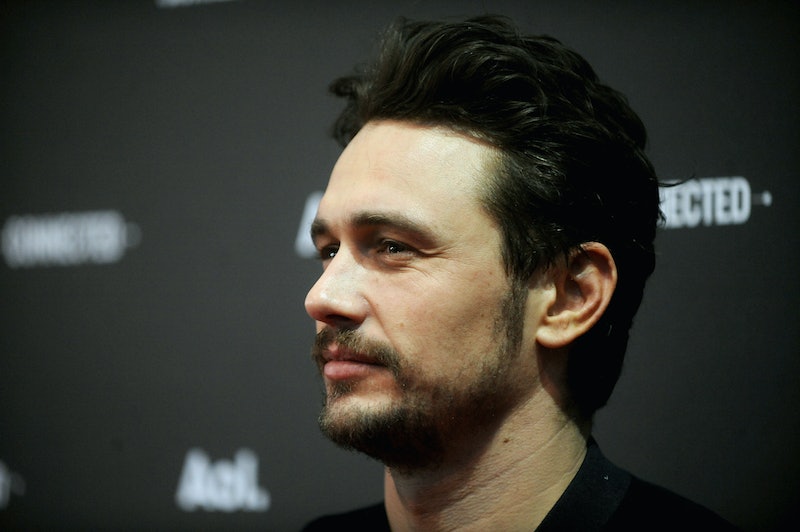 James Franco has quickly become one of Hollywood's most controversial stars, and we're not talking about his 2011 Academy Award hosting gig. From his nearly-nude Instagram photos to his scandalous attempts at picking up under-age women, Franco's personal life has skyrocketed to the front of our consciousness. So what happened to the Franco that presented artistically controversial performances, like his roles in films like MILK — the story of California's first openly gay elected official — Or 127 Hours , the glorious and gorgeous story of survival in unthinkable circumstances? Actually, these performances haven't haulted, but our vision of what Franco is today is less of a talented actor and more of a creepshow. Yet this doesn't trump the fact that James Franco, who got his start along side Drew Barrymore in Never Been Kissed, is working hard as hell at his craft, er, crafts.

James Franco is currently on Broadway with Of Mice and Men through July, but that didn't stop him for signing on for a directing project that will overlap during his Broadway duties. Franco will direct The Long Shrift, an off-broadway play with the Rattlestick Playwrights Theater in New York. The play will run from July 7 through August 23, and Franco will perform his usual juggling act. This will be his first attempt at on-stage directing, although the actor has tackled feature film directing in the past.

And while two projects would be enough for most, Franco is also currently offering acting, directing, and screenwriting classes. The screenwriting class, which was announced over the weekend, costs a mere $25 and is a self-paced online course where Franco guides students through crafting a short film screenplay.

And lest we forget that Franco just wrapped Palo Alto, a film he starred in adapted from a book he wrote. He's also written a few other books, because you know — acting, producing, screenwriting, teaching classes at UCLA and elsewhere, directing and painting aren't enough creative avenues to explore.

It's hard to believe that this is the same man who consistently updates his social media channels with lazy looking photos of him lounging in bed or standing groggily in front of a mirror partially-clad. James Franco, no matter how un-PC his Instagram feed may be, is 2014's Renaissance man. He tackles everything and anything, with a selfie or two to prove it, and although it's easy to focus on his admittedly creepy behavior, no one can argue that the man isn't one of the hardest working actors in modern Hollywood.