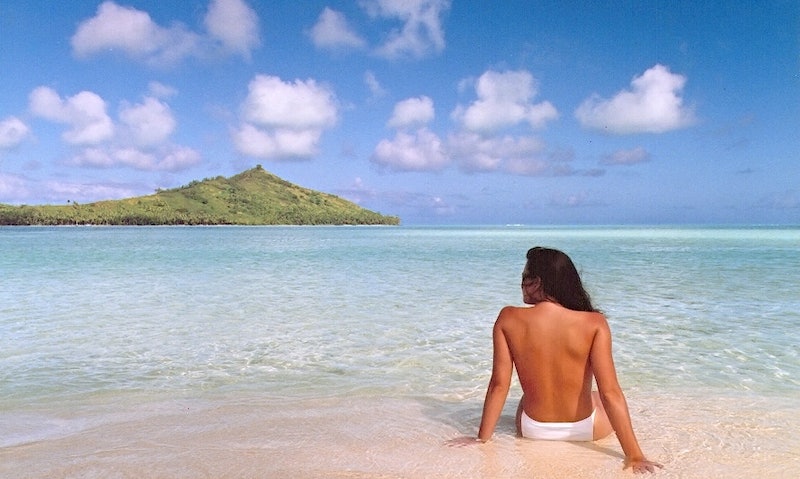 Does the photo up top look familiar to you? It should; called “Jennifer in Paradise,” it’s one of the most important images in the history of digital image manipulation. What you’re looking at is the very first photo ever used in Adobe Photoshop — and it’s also a pretty powerful reminder that Photoshop wasn’t always the vilified piece of computer trickery that it is today. Believe you me, I’m one of the biggest supporters of the “Enough with the Photoshop in Advertising!” movement — but the Guardian is currently running a piece about the history of Photoshop in relation to “Jennifer in Paradise,” and it’s definitely worth a read. Who knew that something as impersonal as Photoshop could have such a personal history behind it?

Here’s how it went down:

Back in 1987, visual effects artist John Knoll snapped a photo of his then-girlfriend, Jennifer, on a beach in Bora Bora. The couple worked together at Industrial Light & Magic, the SFX company founded by George Lucas as part of the Lucasfilm production company; having just finished work on Who Framed Roger Rabbit?, a film that had them pulling 70-hour weeks, they were taking a well-earned holiday to relax and recharge their batteries. Knoll proposed to Jennifer on that vacation, and after decades of marriage, it remains one of their favorite times together. Knoll called the photograph “Jennifer in Paradise” — although when it he took it, he had no idea how legendary it would become.

Anyway, Knoll had already been introduced to the wonders of image manipulation software through the Pixar Image Computer. But the machine was so expensive and complicated that it wasn't exactly fit for home use. Knoll discovered that his brother Thomas, who was completing his Ph.D in at the University of Michigan, had created a piece of software himself that was capable of manipulating images — and this one could be run on a Macintosh Plus. They worked together throughout 1988 to develop the software, and in order to demo it, they needed some digital images to manipulate. Knoll scanned in “Jennifer in Paradise,” and once it had been digitized, it became the primary full-color photograph the Knolls used to demonstrate what they were now calling Photoshop. After a successful demo, Adobe bought the software; the first version of it, Photoshop 1.0, appeared commercially on February 19, 1990.

Back in 2010, Knoll made a video recreating the original demo he and his brother used to shop the software around. It’s long — around eight minutes — but it’s worth watching if you’re at all interested in image manipulation. Many of the features shown are still widely used today, although here, there’s not a nip, tuck, or pizza-turned-woman in sight:

I think what I like so much about this little time capsule is the reminder it gives us about the artistry involved in image manipulation. Photoshop isn’t inherently evil; it’s an artistic medium like any other, with pixels instead of paint and a computer screen instead of a canvas. Unfortunately the amount of bad Photoshop art out there seems far greater than the amount of bad painting or sculpture or what have you, especially in the mainstream. Seriously, Target — how does this happen?

Sometimes I wonder how we got from a piece of software that was all about opening up a world of infinite vision to one that narrows us to a very specific idea of beauty — but as Knoll himself noted in the Guardian article, “Any tool can be used for good or bad. It’s really the ethics of the artist using it.” It’s sort of the artistic equivalent of the Spider-Man creed: With great digital and artistic power comes great digital and artistic responsibility. It helps to remember that amongst all the Photoshops of Horror and overly-touched up magazine covers, there are also things like Svetlana Petrova’s cat-adorned works of art. I mean, it doesn’t make bad advertising better… but at least we know that people are making awesome things with Photoshop, too.

Also, as Slate notes, “Jennifer in Paradise” really makes us wish that we were on vacation right now. “No wonder Photoshop got so much mileage out of one image,” writes Lily Hay Newman. To which I say this: