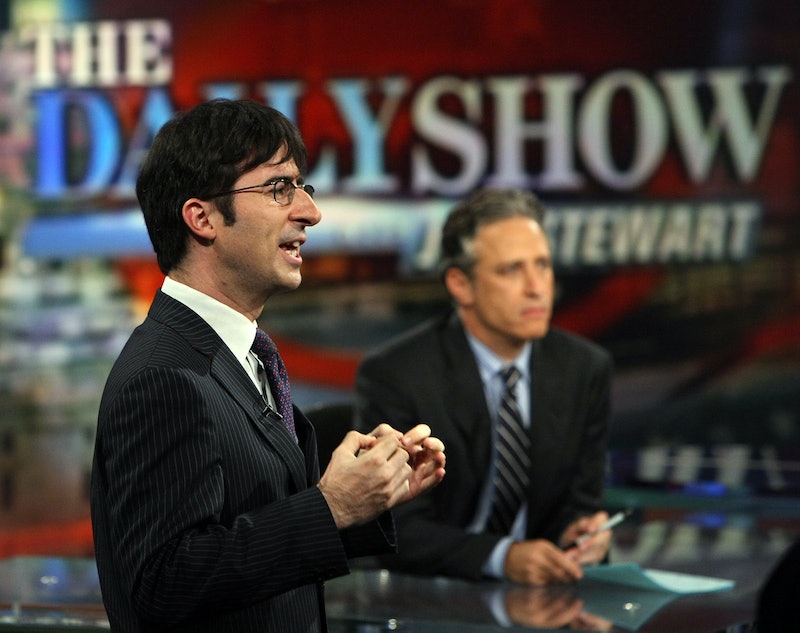 It's a good ol' fashioned summertime British invasion on The Daily Show! Starting Tuesday, The Daily Show's Senior British Correspondent John Oliver will be sitting in for host Jon Stewart while he directs his first film, Rosewater, in the Middle East. Let me be the first (more like the last) to say that I'll be welcoming the smarmy little Brit replacement host with open arms.

Smart move on Daily Show's part for choosing Oliver, who has been on the show since 2006, as Stewart's temporary replacement. Oliver's holier-than-thou-damned-Yankees persona is such a great counter to Stewart. I'm fangirling probably because I love Oliver — some of his segments have been the best the Daily Show has offered in the past seven years, especially the recent series on the vacuous differences between Australian and American gun control laws:

Heavy stuff from my fav stoic Brit. Here's how I think Oliver can become his own little cult hit this summer on The Daily Show (as if he's not already):

1. Capitalize on that superior Brit "well, I never" attitude that's become his bread and butter.

Oliver wrote the book on being an aghast outsider to the strange American sensibilities that shape our politics. Can't wait to see how he tackles the "Troll the NSA" story that broke just this morning and will no doubt put the culture of American surveillance and big-brotherism on blast. Oliver + The Patriot Act = Serendipity. Bonus for me because I love British idioms and the rest of their wacky ideers.

2. Show some feeling! This is America and we're emotional.

In an interview with Dave Itzkoff on the NY Times Arts Beat blog, Oliver said himself: "I’m British, so obviously I repress any powerful emotions of any kind in relation to anything. I don’t think it’s going to hit me until I sit down at the desk and the music starts." Cute, because you can tell that he is extremely excited about hosting the show this summer and is trying to refrain from emoting. But one of the best parts about The Daily Show is its unique interview platform. Stewart has interviewed everyone from jovial enemy Bill O'Reilly to the POTUS Obama and the casual "infotainment" atmosphere always lends surprises and good insight. I am excited to see Oliver dissolve his arse shield a touch to connect with guests in interviews. (First guest on June 10: Seth Rogen!)

For the love of god, please. Give the people what they want (which is puppets).

More like this
Bustle Daily Newsletter: November 30, 2022
By Hayley Schueneman
'Bridgerton' & 'Succession' Casts Join Forces For A New Dickens Adaptation
By Darshita Goyal
'Waterloo Road' Is Back, With More Than A Few Familiar Faces
By Sam Ramsden and Vivian Iroanya
Matt Hancock Broke a Major Rule With I’m A Celeb
By El Hunt
Get Even More From Bustle — Sign Up For The Newsletter