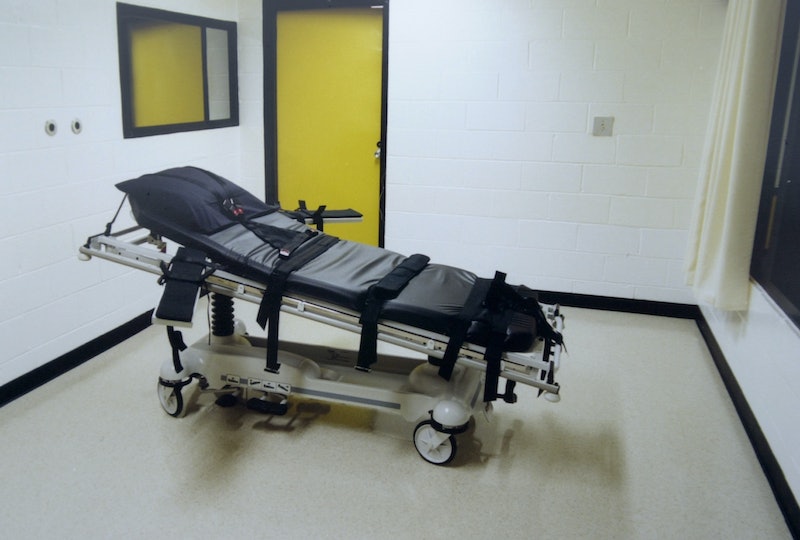 On Monday, a federal judge denied a stay of execution for Georgia death row inmate Marcus Wellons, scheduled to be the first person executed in the United States since Oklahoma's botched legal injection of Clayton Lockett in April. On Tuesday evening, Wellons was put to death. Wellons, who was convicted of the 1989 rape and murder of a teenage girl, appealed his execution because he wasn't told which drug — or drugs — would be used.

Unlike Lockett, Wellons exhibited no visible signs of movement or distress after the lethal injection was performed. In his last words, Wellons apologized to the parents of the teenager he was convicted of murdering. “I ask and hope they will find peace in my death," he said. "I'm going home to be with Jesus."

The unknown content of many lethal injections has been thrust into the spotlight following Lockett's botched execution at the Oklahoma State Penitentiary on April 29. Lockett was given an untested cocktail made up of three drugs, and reportedly drifted in and out of consciousness and writhed in pain until dying of a heart attack more than 40 minutes later.

An autopsy released over the weekend found that Oklahoma prison officials failed to properly insert Lockett's IV, causing more pain and effectively botching the execution. Although the state initially said the veins in his arm "blew," the autopsy found Lockett's veins in excellent shape. The autopsy added that there were puncture wounds in Lockett's arms, indicating that the prison staff did try to insert the IV into his arms before settling on the groin area.

Lockett's death has prompted anxiety and apprehension among those waiting on death row, including Wellons. He and his lawyers cited Lockett as an example in their request for a stay, demanding that Wellons be aware not only which drugs will be used to end his life, but also the qualifications of the prison staff.

So why can't Wellons, and other inmates on Georgia's death row, know these details? Because Georgia law doesn't allow it: Last month, the Georgia Supreme Court upheld a state law maintaining the secrecy of lethal-injection drug makers and suppliers.

The law also keeps secret the identities of doctors overseeing executions. Justice Harris Hines wrote in the court's opinion that the reasons for privacy are "obvious." It's a way to avoid harassment from the family of prisoners and community members, the justice explained. He added that the "most obvious party in need of protection" is the executioner.

Secrecy lethal-injection laws, like Georgia's, also help protect drug suppliers, many of which have been targeted in the past. It's a necessary protection, as lethal injection drug supplies continue to dry up in the United States. In 2011, the drug company Hospira ceased production of sodium thiopental — an anesthetic used in lethal injections —following an expansive anti-death-penalty campaign aimed at pharmaceutical companies. Hospira was the leading supplier in the nation.

When Hospira pulled out, the U.S. swiftly found itself in a lethal-injection drug shortage, causing states to explore alternatives, including Europe-based drug companies. However, the European Union issued an export ban on lethal-injection drugs in 2011. As a result, the drug shortage continues. States have scrambled to put together "experimental" drug cocktails, with mixed results. In January, Dennis McGuire endured a painful execution in Ohio, according to witness Father Lawrence Hummer. "There is no question in my mind that Dennis McGuire suffered greatly over many minutes," he said.

The Oklahoma Supreme Court recognized that executions would be seen as "more humane" if the state did disclose all the information. But Justice Hines argued it will make the executions less "timely and orderly" — because it would result in public protests.

On that point, the Georgia Supreme Court justices have that right. Many people, from anti-death-penalty activists to the Obama administration, aren't happy with this secrecy — particularly when it results in a death that the White House considered inhumane. Oklahoma, too, has a legal-injection secrecy law in place and its legal battle temporarily delayed Lockett's execution.

Lockett was granted a stay of execution while Oklahoma courts debated the law last March. The case made it up to the Oklahoma Supreme Court in April, which eventually dismissed Lockett's case, saying he didn't have the right to know about the drugs or procedure of his own execution.

Georgia is not the only state preparing for executions this month. A Missouri man, 47-year-old Michael Taylor, is scheduled to be executed this Wednesday. Missouri also keeps the details of their lethal injections secret, and lawyers representing Taylor are currently appealing the execution.

More like this
The Families Of Grenfell Tower Are Still Waiting For Justice, Five Years On
By Bustle UK
How To Fight For Reproductive Rights, Based On How Much Time You Have
By Courtney Young
Yinka Bokinni Recalls Terrifying Truth At Heart Of 'How To Hire A Hitman'
By Frances Stewart
Windrush Victims Are Still Waiting For Compensation
By Sam Ramsden
Get Even More From Bustle — Sign Up For The Newsletter