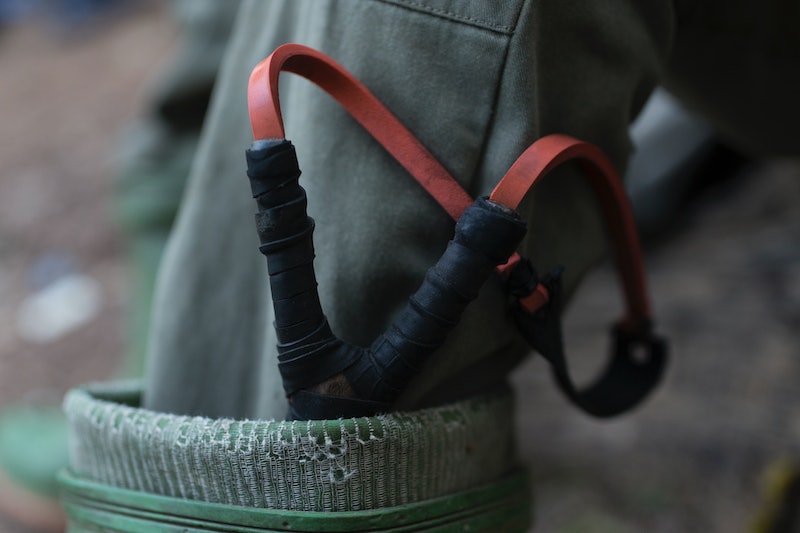 Whatever you do, don't call it a Snapchat knockoff. On Tuesday, Facebook released Slingshot, its new Snapchat-esque ephemeral messaging app, for iPhones and Android devices. While the temporary quality of the photos and messages sent and received through Slingshot feels a lot like, well, Snapchat, there are some substantial differences that make it worth downloading. (It's also not made by Evan Spiegel, which is a plus.)

The new app lets you take a picture or a short video, add on some colorful drawings, caption it, and then send it to friends. Once the image or message is viewed, it disappears. Sounds pretty straightforward and familiar so far, right? But here's the catch — and what makes Slingshot distinct. Your friends can't see what you sent until they send you something back. So if you want to know what your friend sent you, you have to show them what you're up to first.

While this clearly has its flaws (which we'll get to later), the app's creators are confident that it'll change the game. Slingshot designer Joey Flynn told The Verge, "We don’t see this as a messaging app." He says that the "pay to play" mechanic of the app will turn each messenger into a creator. "[Venture capitalist] Fred Wilson once said that the cardinal rule of social networks is that one percent of people create content and 90 percent of people consume it," Flynn continued, "and we want to flip that on its head."

If you're still convinced that Slingshot is just a newer, shinier Snapchat, then keep reading for more details about the new app. Also, who do you think Facebook are, a bunch of amateurs?

Because you have to send something in order to view something, Slingshot distances itself from the sleazy stigma attached to Snapchat, which is commonly known as the sexting app. If you're not comfortable sending your own messages, then you don't get the privilege of seeing other people's.

Another defining feature that sets it apart from Snapchat is Slingshot's Select All button, which allows the user to "sling shots" to all their friends at once. This is a feature that Snapchat users have been requesting for a while.

Besides its signature "reply to unlock" design and the Select All button, Slingshot is visually fun and whimsical. The Draw function allows you to doodle images over your photo, with a variety of brush sizes and colors, and you can caption photos in more than one way. One of the app's most unique visual features is the pixelated locked photos. After sending your own photo and unlocking them, they gradually de-pixelate to reveal a clear picture.

... But If You Want To Stick To Snapchat, That Works Too

Early testers have pointed out that since you can't immediately view the messages your friends send, the push notifications are more like nagging reminders to take action rather than exciting announcements. Without the fast pace of freely viewing and sending messages, Slingshot notifications almost become a second Facebook wall — something you're aware is there but does not require your urgent attention.

Another flaw is the whole being-caught-doing-something-embarrassing aspect. What if you're currently watching Keeping Up With the Kardashians when your friend messages you? You'd have to pause it and quickly search for some documentary on Netflix before messaging back "Totally gaining knowledge about Syria right now."

Sure, you don't have to message back until after the Kardashian episode, but what if you're just dying to know what your friend sent you because you know she's currently competing in a chili eating contest? And by the time you finish binge watching and message her something, what she sent you could be totally irrelevant. We see a lot of pretend activities in Slingshot's future.