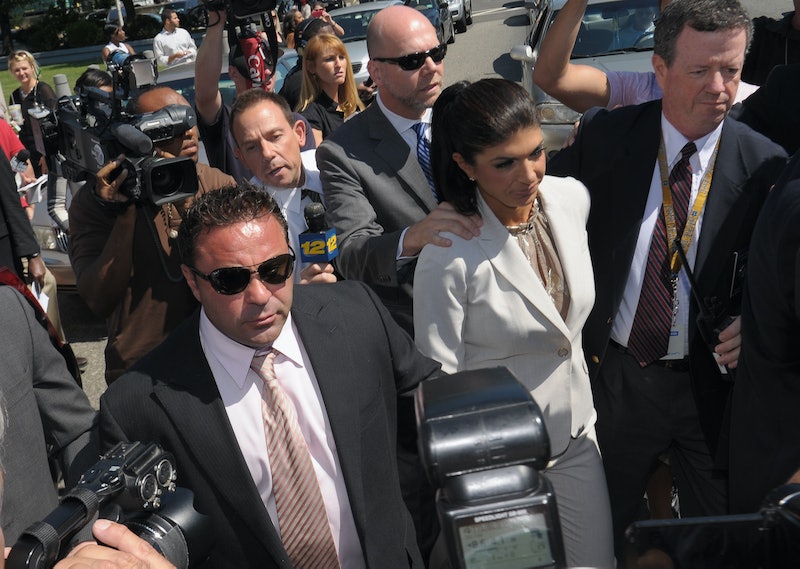 After a court hearing Tuesday morning, Real Housewives of New Jersey stars Joe Giudice and Teresa Giudice were released on $500,000 unsecured bail bonds, each, and instructed to stay in the tri-state area. After being indicted with 39 counts of fraud, not the least of which includes bankruptcy fraud, mail fraud, and mortgage fraud, the Giudices have claimed they're innocent and insist they're being unfairly targeted because of their fame. On Twitter, Real Housewife Teresa says she's committed to maintaining their lives in "the best way possible."

Classic Teresa — keeping up appearances would be her main priority as she faces 50 years in prison. And it's not surprising that she's blaming her so-called fame for this indictment, either. Nothing's ever her fault, it's the system and it's pesky rules about paying your bills that is the real asshole, here. Teresa's just an innocent victim.

But, and as much as I hate to admit it, Teresa does have half of a point. She probably is being targeted because she's on TV ... it's just that there's nothing unfair about it. It doesn't take the sharpest tool in the mob's shed to take one look at the way they flaunt their money, then decry bankruptcy, to figure out that something ain't adding up.

Let's take a look at the clues that Teresa and Joe PUT ON NATIONAL TV, shall we?

On Season 1, Teresa tells the camera that her husband is an entrepreneur, then proceeds to pay $120,000, in cash, for the most heinous furniture money can buy ...

and then puts it in the $4 million house they custom built in Montville, New Jersey.

She goes on shopping trips to Atlantic city:

But she doesn't just spend on herself, her four daughters get in on the fun, too:

But uggggh, it's sooooo sad, because she's bankrupt!

But it's cool, Joe's not worried about a thing when meeting with a lawyer to go over their money problems:

So how do they celebrate their bankruptcy? With a tenth anniversary date night that included a night in a fancy hotel, a helicopter ride, and a giant yellow diamond, of course:

In-home hair and makeup visits are NBD for Teresa, too. They're totally worth it:

And spending money on this makes a lot of sense:

Chanel shopping sprees in Venice, paying one and half the price, thanks to the dollar to euro conversion? The Giudices don't mind!

And this isn't even the half of all her money brags over the last five seasons — if any of the prosecutors had been watching the show, they could have easily seen that Teresa and Joe's spending habits don't exactly gibe with their bankruptcy filing. And with Teresa reportedly earning $650,000 a season for her time on the RHONJ, you have to wonder how "broke" they really are.

And, yes, because you're wondering, I am available to be a witness in the case against Teresa. I like to call this blog post, officially speaking: Exhibit Awesome, Beeyatches.

[Images via Bravo; In Touch]