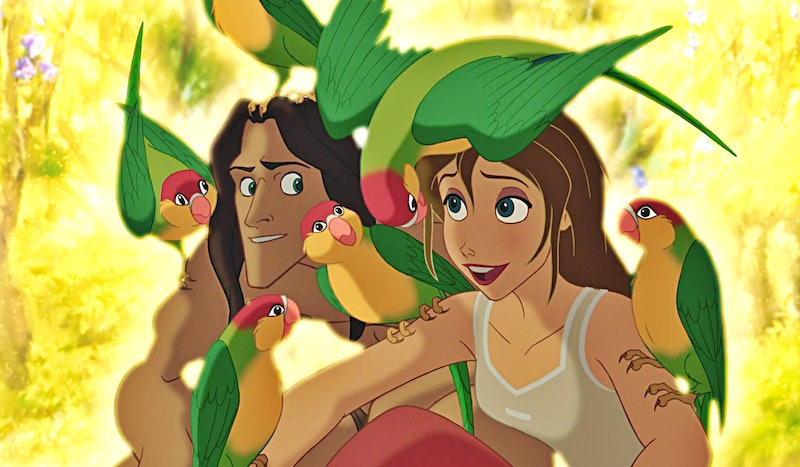 Are you ready to feel ancient? Or just ready to be reminded of what happens with the normal passage of time? Disney's Tarzan is 15 years old this Wednesday. we'd say time flies but really it's been a very long 15 years. Are we sure it hasn't been 20? Maybe infinity? Are we not infinity old yet? Ok. Regardless, Tarzan can officially get a permit to drive in many states as of June 17, and now is the time to remember: Tarzan freaking rocked. It was so epic, you guys.

Though we're still not entirely sure what to make of that David Yates-directed Tarzan starring Alexander Skarsgard and Margot Robbie will be and the myriad of ways its abs and the presence of a True Blood star will set out to destroy our childhoods, our memory of the Tarzan of the turn of the century remains unblemished so far. And thank goodness, because its riches were plentiful. The colors! The songs! The animals! The humans! The palm trees! That weird attraction to animated characters Disney fostered in us! Here are some of the things we loved about 1999's Tarzan, in all its glory:

It started out with a very sad bang

This may not seem awesome — I know a few viewers who popped out the VHS and refused to keep watching, declaring it too sad — but starting out a movie with something so maudlin as the main character's parents being devoured by cheetahs while the main character's still an infant is pretty memorable. It's a Disney trope to murder a parent or two early on for tragic backstory purposes (lookin' at you, Frozen), but this one actually seemed crucial to the plot. Besides, it led to a beautiful story about found families and adoption that still makes us smile. All you've gotta do is completely ignore the fact that Tarzan would have grown up with some serious mental deficits if he'd actually been raised by gorillas.

Some of us got through college by studying to the Tarzan soundtrack, and that is a completely valid life choice.

Phil Collins, man. Sometimes we can't tell his songs apart, sometimes we've been singing "You'll Be In My Heart" to ourselves for the past 15 years. The Tarzan soundtrack was pretty epic, and a pretty big deal in 1999: It brought home the Oscar and the Golden Globe for Best Original Song.

Before there was Vine there were actual (animated) vines, which the very buff animated Tarzan used as his main form of transportation. Only true nineties kids (or just anyone who's seen this movie) will understand. There was so much vine-swinging in this movie, you guys.

A very important plot about education

Jane was so cool, you guys. I'mma let you finish, Anna-from-Frozen, but Disney fangirls already had an awkward lady hero to look up to, and it was Jane. We're not just saying that because she rocked a giant bustle while trekking through the jungle and this website happens to be called Bustle. And unlike her counterpart John Smith from Pocahontas — who was also immersed in a world he didn't understand, though it should be noted his had more humans in it — Jane approached her time with Tarzan as more of an opportunity for education than one of imperialism or colonialism. Jane rocked.

Her dad rocked, too:

Gotta have a good jam session, and this one involved Rosie O'Donnell riffing. Oh, and a Beauty and the Beast easter egg.

A lot of us could relate to the characters

Whether you were more like the rambunctious Terk or the hypochondrial, neurotic Tantor (holla to my fellow nervous children!), there was something for practically everybody.

President Fitz was the voice of Tarzan

I found this part out approximately 15 seconds ago and I am freaking out about it. No wonder Olivia Pope can't get enough! The guy's had magnetism for decades! I can't handle this.