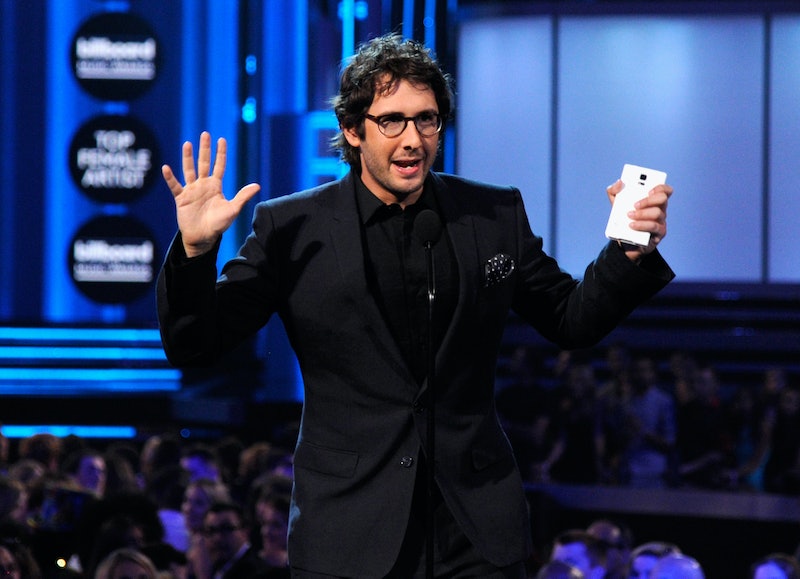 Chardonnay-loving moms may have been his biggest fanbase, but thanks to his always thought-provoking and giggle-inducing Twitter account, Rising Star host Josh Groban has garnered a whole new slew of fans. (Although I've always been a Groban supporter because he is completely swoon worthy in a I-just-want-to-put-on-a-turtleneck-and-sit-next-to-a-fireplace-and-cuddle kind of way... you know it's true.)

With tweet after tweet he manages to make whatever the hell is going on in his head — which is placed under some wonderful bedhead hair — somehow endearing, funny, and honest, all at the same time. And we all know that that's an applause-worthy feat since the same can't be said about some of the other celebs out in the Twitterverse (Russell Crowe, we're most definitely looking at you). From commentary on pop culture to what he feels like eating to excellent use of emojis, the angel-voiced singer has mastered Twitter. He's so good at it that, honestly, he shouldn't be considered just a musician anymore — he's also a Twitter comedian. (A Twittedian, if you will.)

Plus, it's just not his own Twitter account that he's a master of; he's also a master of Kanye West's Twitter. Anyone else remember when he sang West's tweets on Jimmy Kimmel Live? Yeah, it was pretty great.

Just in case you don't believe me, take a gander at some of Groban's Twitter gems and judge for yourself:

1. When he was a philosopher.

I hope he figures this out one day.

2. When he understood the HBO Go struggle.

No, you can not have my password, you fool.

3. When he asked important questions.

Finally someone had the guts to ask.

4. When he pretended he was a sassy tennis player.

5. When he figured out why people love him.

Self-deprecation always gets a laugh.

6. When he took the time to think about the important things.

I mean, thumbs are pretty underappreciated.

7. When he thought about the truths of death.

Drink all of the water you can now, folks.

8. When he admitted he knows he has hobbit hair.

Frodo would be proud.

9. When he accurately expressed his dog's thoughts.

He speaks the truth.

(So that's how he knew what his dog was thinking.)

15. When he wouldn't let anyone/anything tell him what to do.

16. When he admitted he shouldn't be allowed to work at Starbucks.

Employee of the year, right there.

17. When he called out the red-carpet reporters.

They're secretly all super pervy.

18. When he admitted he's actually just a 23-year-old college grad.