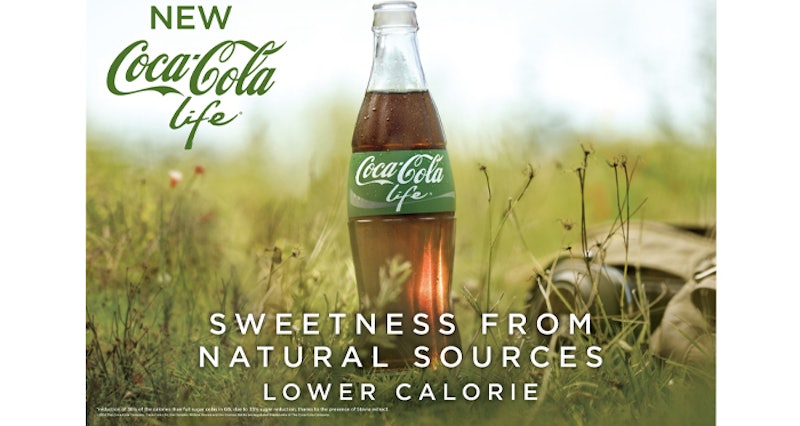 Because apparently there aren’t already enough varieties of Coke in the world, Coca-Cola is planning on launching a brand new drink in the near future. Called Coke Life, it's sweetened with stevia and will come in a green can as opposed to the brand’s trademark red. Coke Life has a third less sugar and a third fewer calories than regular Coke, which, combined with the use of stevia instead of aspartame, projects an image of healthiness — but there’s just one problem: It’s still soda. And soda is pretty much always bad for you, regardless as to what it’s sweetened with.

According to health campaigners speaking to The Guardian, promoting the drink as a healthier alternative to shoppers is just a bit misleading: Coke Life may have less sugar than regular Coke, but it still has four teaspoons of the stuff in it per 330ml, 89-calorie can. That’s a full quarter of a child’s daily recommended maximum sugar intake — and, according to some dentists, the maximum amount of sugar adults should consume per day if they don’t want to lose all their teeth to decay (for the curious, a standard can of Coca-Cola contains 10 teaspoons of sugar and 139 calories). Said Dr. Aseem Malhotra, scientific director of the UK-based association Action on Sugar, “Whatever the company says, this is a product with a high sugar content and it will encourage people to have a sweet tooth.”

I’ve no doubt the development of Coke Life is a direct response to the steady decline of soda sales seen in the U.S. over the past decade, a trend which Business Week notes has seen gain further traction in the last year. In 2013, U.S. soda sales dropped 3 percent, more than double the 1.2 percent they’d fallen in 2012; furthermore, they’ve continued to slide an additional 3 percent so far in 2014. Nor are diet sodas weathering the storm — Diet Coke sales in the U.S. dropped almost 7 percent last year. Between the health conscious cutting soda out completely and state governments attempting to regulate sugary drinks and snacks, it all spells out something that’s very bad for business for Coke.

Can Coke Life buck the trend? I don’t know, but we’ll find out whenever this stuff hits shelves. Polly Mosendz of The Wire certainly doesn’t think so, and she’s a regular soda drinker herself. “While I am a Diet Coke purist, I take issues with any soda product boasting as ‘healthy’ or ‘natural,’” she writes. I understand the product I am drinking is doing probably irreversible damage, and I don’t need a green can to try to convince me otherwise.” She concludes, “Having taste tested all the options, I can say Coke Life is a fine soda, but I am going to stick with Diet Coke. I don’t need my sugar water masquerading as anything except what it is: Terrible for my health, really delicious, and keeping me very, very awake.”

No word yet on when Coke Life will be making its North American debut, but according to The Guardian, it will launch in the UK this fall. Whenever it rears its little green head, though, I’ll be taking a pass. The healthiest option of all, of course, is just to not drink soda.