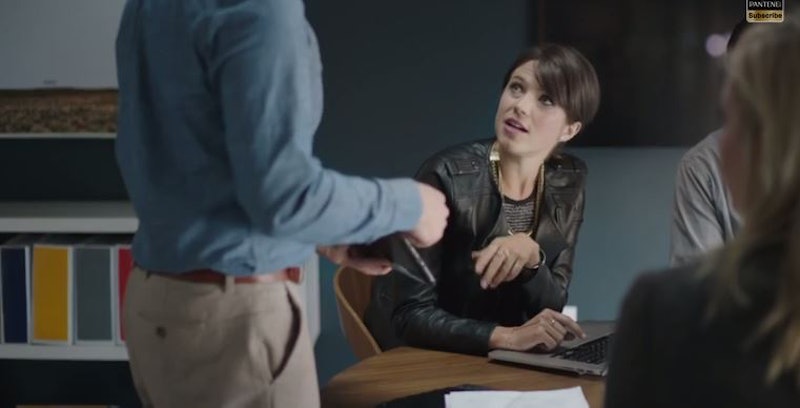 The next installment of Pantene’s Shine Strong ad campaign is in, and it’s totally not sorry. Why? Because it shouldn’t be, that’s why. Called “Not Sorry,” the video draws attention to how often women say “sorry” when there’s nothing to apologize for — and then turns it on its head by showing those same women in the same situation without saying sorry. The goal is to encourage women to stop apologizing unnecessarily. True, the ad undercuts itself a little with the use of the phrase “Sorry not sorry” — as Kristina Monllos at Ad Week notes, “It doesn’t really work for the context of the ad; one of the women saying she’s not sorry is hogging the covers. I’m not sorry to say that she should be sorry!” — but as someone who tends to be one of those constant apologizers, I think it’s a lesson worth taking to heart, even if it’s a lesson we’re getting from an advertisement.

More importantly, though, is this: The ad is a step from the “Labels Against Women” ad Pantene ran in the fall of 2013 — as well as a major improvement over Dove’s “Real Beauty” campaign. A lot of the criticisms of “Labels Against Women” pointed out — and rightly so — that just drawing attention to an issue in the name of selling a product just exploits the issue, rather than trying to solve it. This time, though, the company is putting its money where its mouth is: The ad coincides with the launch of the Pantene Shine Strong Fund, a collaboration with the American Association of University Women (AAUW). According to a press release, the Shine Strong Fund aims “to educate and enable women to overcome bias and/or societal expectations so they reach their full potential, as well as celebrate the many strong women in the world who exemplify the essence of Shine Strong.” To that end, it will supply resources for women in three different areas: The AAUW and Pantene Shine Strong Campus Action Project college grant program, professional training programs to help women succeed in the workplace, and the continued action of the Pantene Beautiful Lengths program.

I don’t know about you, but that all sounds pretty awesome to me — and it’s exactly the message communicated in the “Not Sorry” video. Beautiful Lengths has emerged in recent years as a significantly less shady hair donation program than Locks of Love, and the Shine Strong Fund has the potential to accomplish a whole ton of good. Sure, Pantene’s Shine Strong videos are selling something — all ads are — but at least the company is also putting its position to good use.

Maybe I’m just a sucker. But even though I don’t use Pantene products, and even though this ad isn’t likely to make a Pantene convert of me, I still have a lot of respect for what they’re doing beyond selling stuff. The company is actively trying to enact change in the world, and that’s pretty commendable — with or without shiny hair.