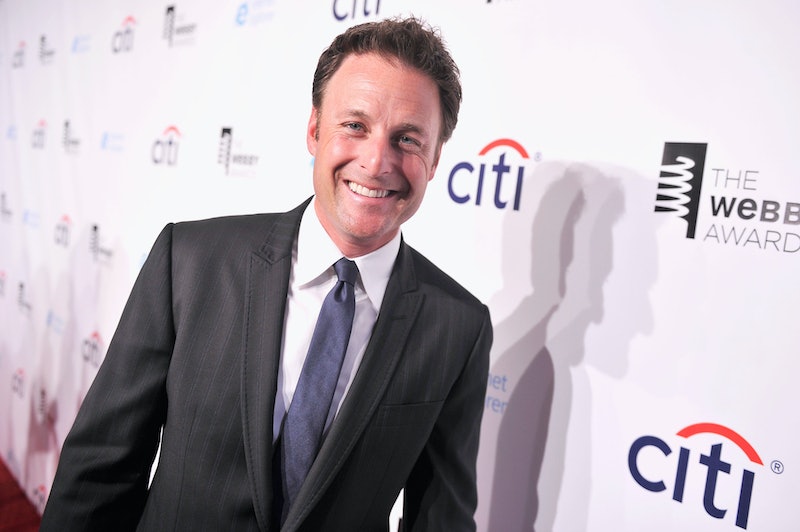 No, the host of The Bachelor still won't be the Bachelor, but Chris Harrison did say he's open to dating a former Bachelor contestant. He's basically pulled a Justin Bieber, revealing:

I'll never say never to anything — you get in trouble when you do that. But definitely while the show is going on, whether it's Bachelor or it's Bachelorette, I never really look at it as an opportunity.

Still, though he wouldn't steal away one of the women while they're vying for a rose, once filming wraps, that's a whole other story. And it's entirely possible Harrison could fall for one of the ladies — it's happened for other crew on set. In 2010, Bachelor producer Ryan Callahan allegedly got together with contestant Rozlyn Papa. At the time, she was still on the show, so it wasn't the best match, leading to Callahan's firing and Papa's ousting from the show.

But Harrison is very aware of the work/personal life separation, saying, "I love hosting and ... it's clinical that I approach it as a job." So he wouldn't have a problem waiting until the season was over to woo one of the ladies. And just in case he needs some matchmaking help, here are seven former contestants we think would be a perfect for the host.

The former Bachelorette has long since split with winner Roberto Martinez, which means she's had plenty of time to leave the show behind her and start her own life. She's now an E! News host. That means she gets the TV lifestyle and would understand the commitment level that Harrison needs to put into his job and vice versa. Yes, she's currently dating Kevin Manno, but, c'mon. Chris Harrison, Ali!

She had the guts to leave Juan Pablo's season on her own free will and was definitely the most normal contestant the show has ever seen. Instead of blindly following the show's "rules" about falling in love, Sharleen called out the sometimes rushed process. The down-to-earth contestant would be the perfect antidote to Harrison's hectic reality show life.

She vied for Sean Lowe's heart, but in the end they weren't a fit (which was probably good, because I'm pretty sure they had very different political views). But she was one of the nicest girls on Sean's season and a personal best friend of winner Catherine Giudici — she was even a bridesmaid at their wedding! It's clear she's over Sean, and ready to move on. Her brains and beauty would make her a great match for Harrison.

Dating rumors have already surrounded these two after she got kicked off Sean's season. The above Instagram pic with Harrison's arm draped across her shoulders sealed the couple in the minds of many. Plus, they supposedly went on a date, where a source said, "Chris was introducing Selma as his girlfriend. They were very cute together and not taking their hands off each other." Who knows if that was true or not, but all I can say for sure is that Selma is one of the few former contestants that Harrison follows on Twitter.

Lindzi from Ben Flajnik's season has always boasted a very classy demeanor. Even when thing were crazy during her Bachelor Pad stint, she stayed out of the drama. Since a drama-free relationship is exactly what Harrison needs, Lindzi could fill that spot quite well.

She's was painted as the villain of Jake Pavelka's season, which she also happened to win. But since the show wrapped, she transformed her image with a renewed attitude about life. She no longer even watches reality TV. "Reality TV stars have a very short television life, so make sure you have a back up and know when to step away from the spotlight and have a normal life,” she said last year.

Her focus on the normal would be a nice break for Harrison when he comes home from another very non-normal day of shooting the Bachelor/Bachelorette.

Let's say this whole Bachelorette thing doesn't work out. Andi's a huge catch and Harrison would be lucky to have her. Besides, that really would be the most dramatic end in the history of the Bachelorette, and we all know how much Harrison likes when the show has drama...