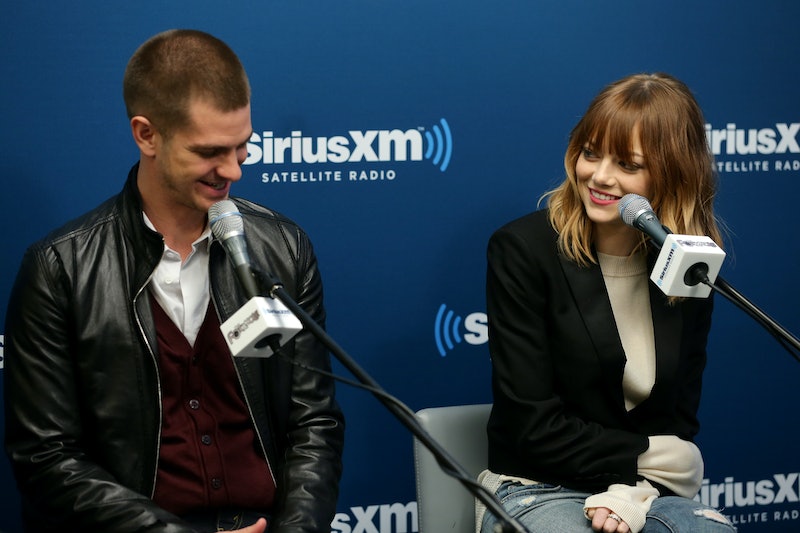 All right, all right, so Emma Stone and Andrew Garfield keep snapping at us to stop putting so much attention on their relationship. In fact, Stone and Garfield have yet to even admit that they're in a relationship. However, it's really, really difficult for us to talk about anything else when they keep being so awesome together. In the latest on the long list of times they were great together, Stone and Garfield used paparazzi shots to promote charities for the second time since they started dating and if this is becoming a habit then it's a habit it's important to encourage.

Don't get me wrong. I love paparazzi shots as much as the next person. As much as we all try to disapprove and as aware as we are of the dangers of the paparazzi going too far, we can't deny that we want to know as much about celebrities as possible. If that means looking at five hundred pictures of them walking in different outfits every day, then we're going to do it if we love them enough. Every single time Emma Stone and Andrew Garfield go out together, fans of them and their relationship are always thrilled to have new pictures of the pair to squeal over.

However, Stone and Garfield have never really enjoyed the attention, before or after they found a better use for it. Of all the ways they could deal with the paparazzi presence, from scowling at the cameras to staying indoors to cursing them out, they eventually settled on promoting awareness. The first time Stone and Garfield did this was back in 2012, when they realized during a lunch date that they had been followed by the paparazzi.

This time, it feels almost like Stone and Garfield lured the paparazzi in intentionally. Paparazzi photos of the two of them sharing a rare kiss outside of Café Cluny were taken on Tuesday. When the paparazzi camped out in front of the same café Wednesday morning until they finished their breakfast, that's when Stone and Garfield struck with their charity bomb, signs held proudly in front of their faces as they exited. Game, set, match.

The tradition of celebrities using their fame to promote charities is much, much older than Stone and Garfield's relationship, but leave it to the two of them to come up with a way to put a fun and different twist on that same old theme. They're protecting their privacy and using their notoriety simultaneously and that sends a pretty powerful statement out to the world. As much time as we spend looking at pictures of our favorite celebrities, we could be using that same time to help people in need.

We might have to wait another two years for Stone and Garfield to pull a stunt like this again, since doing it every day might cause it to lose a little bit of its impact, but it's great to see that their relationship and their values are still going as strong as ever. We're not allowed to talk to Andrew Garfield and Emma Stone about their relationship, but I hope they at least know that all of us approve.

More like this
Taylor Swift, Kerry Washington & More Speak Out On Uvalde Mass Shooting
By Jake Viswanath
Kylie Jenner Roasts Kendall For Her Cucumber Cutting Skills On TikTok
By Jake Viswanath
Halsey Calls Out Label For Asking Them To "Fake A TikTok Moment" For New Song
By Jake Viswanath
These Adorable Kourtney & Travis Moments Led Them To The Altar In Italy
By Bustle Editors
Get Even More From Bustle — Sign Up For The Newsletter