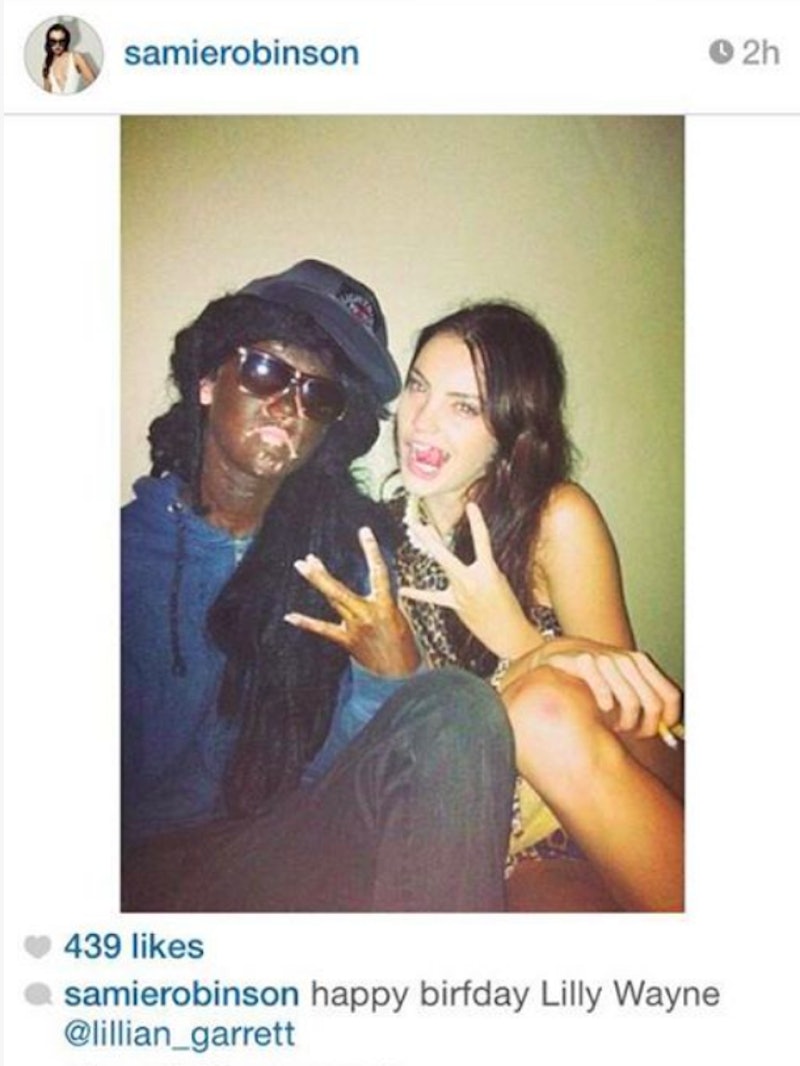 Ughhhh, you guys. It is with a heavy heart that I write yet another tale of a careless mistake made by a super naive celeb. Australian model Samie Robinson posted a photo of herself in blackface to her over 40,000 Instagram followers to "celebrate" Lil' Wayne's birthday. Yup. I'm serious. I can't make this up.

If you're not familiar with Samie Robinson, here's the quick 411: she's an 18-year-old model from Australia who, according to her Instagram, is currently signed with IMG Sebastien. A quick survey of her account will show that she is absolutely stunning and that she enjoys traveling around the world, eating ice cream and flat-faced kittens. So, for the most part, a normal girl.

But on Wednesday, that seemingly normal gal used poor judgment and posted the above photo to her Instagram account, which obviously caused a stir among her fanbase. Followers left comments saying, "Blackface isn't cool..." and "that's pretty racist." Instead of apologizing, Lillian Garrett (the friend in blackface) and Robinson quickly defended themselves. Garrett said that to her, it's not any different than if she were to dress up as Lady Gaga. Robinson chimed in saying, "Would it not be more racist to portray him as a white man, which he clearly isn’t?”

No, actually, Robinson. It would not be more racist. Because what she and Garrett completely forgot (and probably chose to ignore) was the fact that blackface is deeply rooted in the history of racist black stereotypes. And it is completely, 100% not OK to be doing. Even if they slept through that lesson in middle school, they still must have seen cases where other celebrities, like Julianne Hough last Halloween, made the mistake and received major backlash from the media.

But while Hough apologized publicly, Robinson just deleted the Instagram, not addressing the matter with her fans, which in my opinion, is a total cop-out. What annoys me the most is that a good amount of her followers are probably super young, impressionable girls who think that blackface is now OK and a cool thing to do because this really pretty model on Instagram says so. I hope Robinson does the right thing and releases a statement apologizing to all those who she offended.