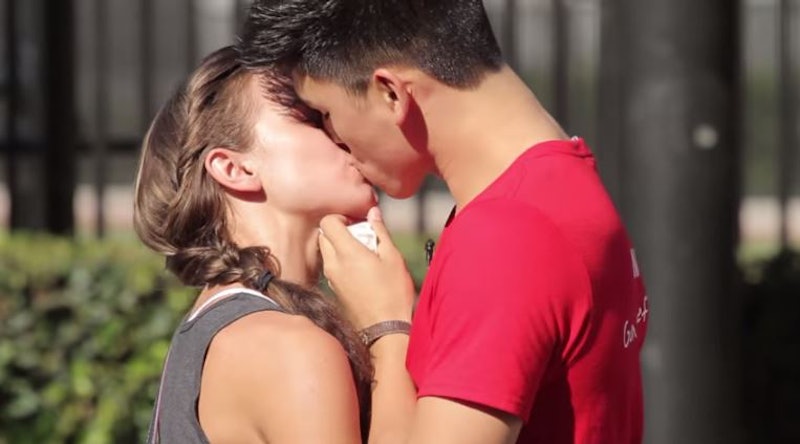 If an attractive stranger approached you and told you that you could kiss them, but only if you chewed a very specific piece of gum first, would you do it? Immune system boosting candy Immuno Gum banked on most people saying yes; accordingly, they spent a day having the hottest guy and girl they could find hang out on a college campus, handing out free pieces of gum followed by free kisses — (of course) filming the whole thing as they went. Yes, it’s awkward. Yes, it squicks me out. No, I don’t think it’s an effective advertisement for the product. At all.

Okay, so it’s actually a little unclear whether this video is an official ad or just a film project. According to Ad Week, business incubator Chicklabs and students from the Chapman University film school created the video to promote the brand; it's not, however, directly referred to as an ad. But even that sets off my bullshit detector: It sounds kind of like they're trying to make themselves go viral without anyone suspecting that going viral is their goal in the first place... which in turn makes me trust them even less (damn! I think I just contributed to their possible viral-ness!). Furthermore, I’m intensely skeptical about the product in and of itself. My favorite bullshit claim? When the girl tells her mark, “Once the flavor starts to go away, you know you’ve absorbed all the nutrients.” Or, y’know, your gum just lost its flavor, as gum is wont to do. Here, have a look:

Created by ER physician Dr. Terry O’Neil, the Immuno Gum claims to give you all the immune system support you need to not get sick in the form of a handy-dandy piece of gum: Zinc, Vitamin C, and a proprietary herbal blend that includes elderberry extract, Siberian ginseng, and Echinacea. Here’s the thing, though: Immune system boosters are all well and good — but miracle cures simply don’t exist. Furthermore, there’s little evidence that the immune support products on the market actually do anything to help. According to the Harvard Medical School Flu Resource Center, figuring out whether herbs or other supplements can enhance immunity is a tricky business; for example, studies examining the effect of Echinacea, which is frequently extolled for its supposed ability to prevent or limit the severity of colds, have typically not been well-designed; as such, we don’t actually know definitively whether it “works” yet. The bottom line? No gum, no matter how impressive it is, will ward of sickness simply by being chewed.

Also, does anyone else find it a little troubling that our vitamins are slowly but surely turning into straight-up candy? I’ll admit to having a soft spot for those gummy vitamins, but I am fully aware of the fact that the only reason I like them is because they’re fruit snacks. One of Immuno Gum’s selling points is that it’s convenient for on-the-go folks, but who actually thinks in the middle of the day, “Gee, now seems like a great time to take all my nutritional supplements!”? Wouldn’t it be easier just to take your vitamins in the morning? Or, y’know, construct your diet such that you get all those vitamins through the actual food you eat, rather than in the form of a pill, gummy, or piece of gum? There are other ways to keep yourself healthy than relying on a magical supplement.

You're not helping, Harry.

I don’t know. I have a weird sort of appreciation for a well done ad, but the product seems dumb and pointless, and the gimmick of the ad seems dumb and pointless. I suppose maybe I should applaud it for being totally unabashed about embracing the “sex sells” advertising technique, but I just feel kind of “eh” about it. Also, I would laugh just a tiny bit if the two people giving out the kisses ended up getting summer colds due to swapping spit with so many other people. That would be the real test as to whether Immuno Gum works, am I right?