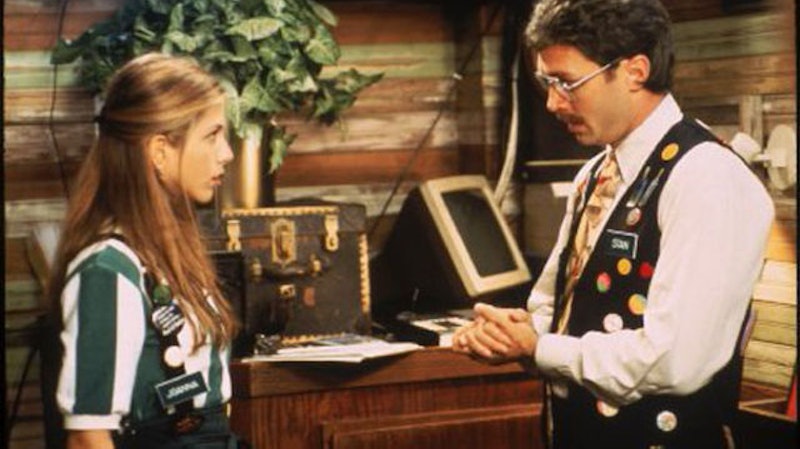 Surely back when you saw Office Space you thought, "Let's listen to Michael Bolton and then go to T.G.I. Friday's where everyone has flair!" And if you were hitting up chain restaurants in 1999, you might have very well had that opportunity. But if you were to re-watch the movie now and head out for film-inspired dinner afterwards, you wouldn't see anyone with flair. Why's that? Because Office Space put an end to flair at restaurants. Because of people like you. Like us. Like me.

Apparently, everyone who went to restaurants like the aforementioned Friday's immediately thought of Office Space when they saw waiters donning ample flair and buttons. How could they not? Jennifer Aniston's waitress character was too good to forget. But waiters didn't care for the frequent references. It got annoying to those waiters who wanted to just do their jobs without having to have a hefty dose of referential humor or hearing a crack from Mike Judge's (EXCELLENT) 1999 movie. Here's what Mike Judge had to say:

About four years after Office Space came out, T.G.I. Fridays got rid of all that (button) flair, because people would come in and make cracks about it [...] One of my ADs asked once at the restaurant why their flair was missing and they said they removed it because of that movie Office Space. So, maybe I made the world a better place.

Yup, no more actor-slash-waiters are forced to tell you about how that piece of flair is from their childhood home in Louisiana — where they really wish they were at that moment. They can instead limit the conversation to Jack Daniel's steak sauce and tourist attractions all thanks to Mike Judge. Hey, is that Michael Bolton playing in the background?