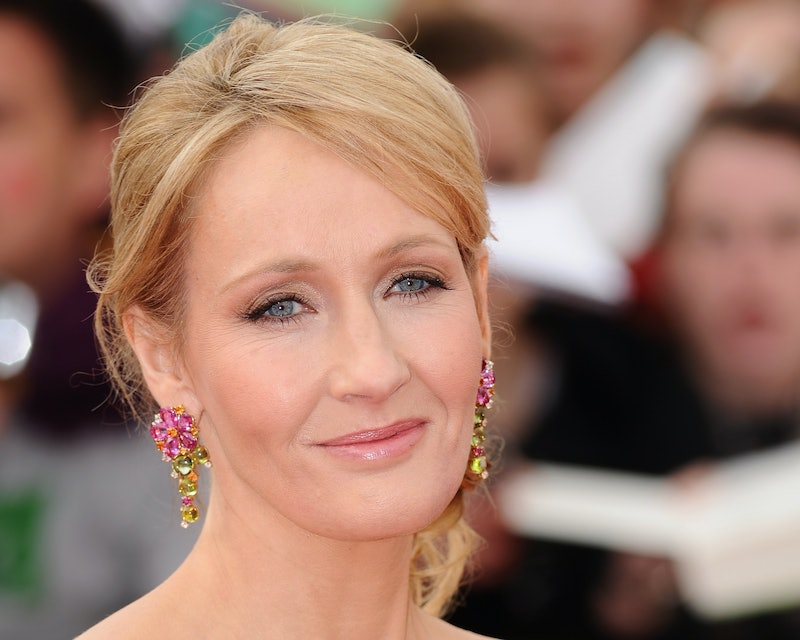 A little over 23 years ago, Joanne Kathleen Rowling's train was delayed.

Little did she — or the rest of the world — know that on that seemingly ordinary train ride, she would come up with idea for the book series that would inspire the world. Back in 1997, Rowling’s beloved Harry Potter series had yet to break book four consecutive book-sale records, had yet to inspire a billion dollar movie industry, and she herself had yet to be named Entertainment Weekly’s 2007 Entertainer of the Year, or to become the 13th most powerful woman in the UK. The name “Harry Potter” was but a mere whisper in a publishing office in London, not the internationally-known moniker of The Boy Who Lived.

Since the date of the initial publication of J.K. Rowling's Harry Potter and the Sorcerer's Stone, her life — and the lives of those affected by her magical world of witches and wizards — have changed for the better. And lo, in honor of the 48th birthday of the books' creator (as well as the birthdate of her titular hero, Harry, who turns 33), we compiled a list of seven (of course) life lessons learned from the author herself. Accio!:

1. Failure is your friend: Rowling’s life story reads like a verifiable fairy tale in its own right. Before the success of Harry Potter, JKR was a single mother — having gone through a rough divorce with her first husband—and was, in her own words, “as poor as it is possible to be in modern Britain, without being homeless.” She also suffered the loss of her mother, who died in 1997 after a 10-year struggle with multiple sclerosis. But Rowling, in her rousing Harvard commencement speech, extolled the fringe benefits of failure. She used rock bottom as “the solid foundation on which I built my life,” stripping away life’s inessentials and focusing on the things in her life that mattered to her most—namely, her daughter, her friends, and her “big idea.” What followed was still an arduous, uphill climb, and Rowling’s initial manuscript was rejected by no fewer than 12 British publishing houses. But the determined single mother refused to give up, and was finally given the green light by Bloomsbury in 1997.

2. Be grateful for your supporters: Rowling freely admitted that she would not have been able to get through her darkest times without the support of her friends, whose value she rates as “truly above the price of rubies.” And even at the height of her success, she never forgot the larger group of people who played an undeniable role in getting her there. As she wrote in the book dedication of the final Harry Potter novel, Harry Potter and the Deathly Hallows:

3. Embrace acceptance: I was at Carnegie Hall the day J.K. Rowling dropped the “Dumbledore is Gay” bombshell. (Though for anyone who’s read the books with even the slightest of discerning minds, it wasn’t much of a bombshell.) To me, it didn’t seem like such a big deal, but it cannot be denied that this casual announcement caused a major — and majorly positive — ripple effect off of which we still feed to this day. So you say the most powerful wizard in the most influential book series of all time is gay? Talk about gay pride.

4. Be Hermione, not Pansy Parkinson: Prompted by the image of a disturbingly skinny girl in a magazine, JKR took to her website to rant about the horrifying ideal of thinness that is prevalent among young women, zeroing in on the messages her own daughters are inadvertently receiving. She wrote: “Is 'fat' really the worst thing a human being can be? Is 'fat' worse than 'vindictive', 'jealous', 'shallow', 'vain', 'boring' or 'cruel'?” Above all, Rowling noted that she wants her daughters to be “independent, interesting, idealistic, kind, opinionated, original, funny — a thousand things, before ‘thin’.” In sum: “Let my girls be Hermiones, rather than Pansy Parkinsons.” Preach!

5. Don’t ride on the coattails of your own success: Have you earned billions of dollars writing children’s books for a living? That’s cool. Now start again from scratch. In April, Rowling released a crime novel called The Cuckoo’s Calling under the pen-name Robert Galbraith, and the author’s true identity remained a secret until someone let it slip a few weeks ago. Unsurprisingly, the book's sales skyrocketed; from selling fewer than 500 copies, it became an instant bestseller. Rowling was pretty peeved; she expressed her desire to work “without hype or expectation and to receive totally unvarnished feedback.” Rowling touted the experience of writing as an unknown author as liberating. (And, ever the do-gooder, even the ensuing scandal led to more philanthropy.)

6. Winning isn’t everything: In 1999, Rowling became the first author to win Britain’s Smarties Book Award for the third consecutive time — and then politely requested that her Harry Potter series not be considered for any future Smarties awards. Because, you know. It’s not even a competition.

7. The power of imagination: In her Harvard commencement speech (which you’ve memorized by this point, right?) JKR also prized the extraordinary power of imagination. Recounting some of her experiences at Amnesty International, she explained what she learned about the extent of human empathy — that people with personal and financial well-being could harness their empathy to relate to and change the lives of those who are less fortunate. Thus, imagination — much like the magic that percolates throughout her Harry Potter series — plays a key role in mobilizing us to involve ourselves in others’ lives. Said JKR: “We do not need magic to change the world, we carry all the power we need inside ourselves already: We have the power to imagine better.”

Rowling eggs us on even further: Don’t just imagine. Do. And of course, because this is Joanne freaking Kathleen Rowling we’re talking about, she practices what she preaches. In 2004, Forbes listed JKR as the first person to become a billionaire by writing books… a title which she soon lost due to the fact that she had donated more than $160 million to charity. JKR’s vast philanthropic ventures include supporting funds such as Comic Relief, One Parent Families, Multiple Sclerosis Society of Great Britain and Lumos. Rowling published the 2001 Harry Potter companions Fantastic Beasts and Where to Find Them, and Quidditch Through The Ages in aid of Comic Relief, raising over $25 million for the fund.

Of course, Rowling's heroine, Hermione Granger, also taught us that you should always carry around a bag with enough room for a couple of books. Because, who knows? Those books may inspire you to change the world.