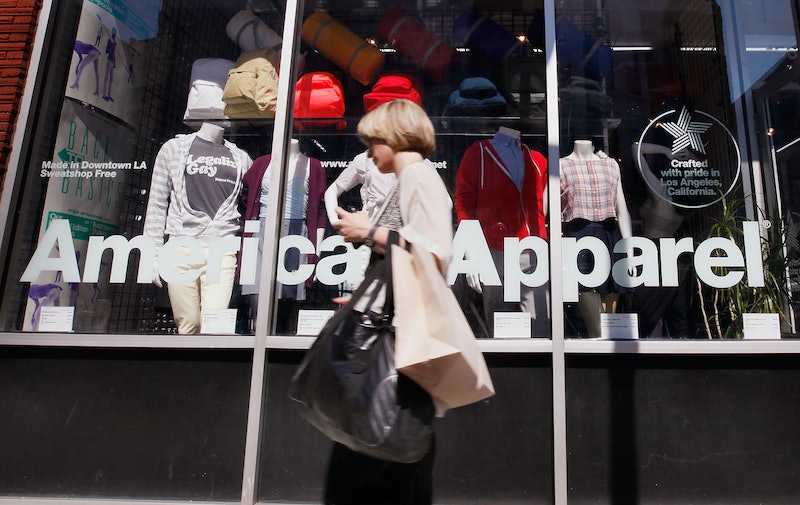 After years of fielding controversy after controversy, American Apparel founder and CEO Dov Charney was fired by his board in a unanimous decision Wednesday. The contentious guy behind the hipster chic company was ousted because of "an ongoing investigation into alleged misconduct," the Board said. Which — considering that Charney once reportedly masturbated in front of a journalist — means they've probably had enough of his antics. Finally.

The company has, over the years, dealt with its fair share of scandal, even outside of those directly relating to Charney himself. It's been accused of racism in its advertising and objectifying hiring policies. Its sexualization of child models has repeatedly come under fire, and even when it tries to do something positive, it comes out a bit bizarre. It's no wonder, really, that the company has been on the brink of bankruptcy more than once.

But none of that really compares to just how far Charney has allegedly gone by himself. A few years ago, Gawker reported that the, er, idiosyncratic CEO had been going through pictures of American Apparel employees, demanding that the "ugly" ones be fired. (Apparently they weren't good for the store's aesthetic.) He's been accused time and time and time again of sexual harassment — years ago, an attorney representing one of the women suing Charney said:"The work environment there makes Animal House look like choir practice."

Charney's been accused of more than just sexual harassment, though — he allegedly choked and rubbed dirt in a store manager's face just two years ago and would reportedly often chill in his office wearing only his underwear. In spite of his being an awe-inspiringly successful entrepreneur — he ran American Apparel's predecessor company out of his dorm room at Tufts — the notoriety he's accrued could fill a warehouse. Still, the company has stuck by him through it all — until Wednesday, that is, when the board had it's annual meeting and decided that Charney was out. Said the board in a statement:

We take no joy in this, but the board felt it was the right thing to do. Dov Charney created American Apparel, but the company has grown much larger than any one individual and we are confident that its greatest days are still ahead.

Let's hope that means its days of upskirt pictures and semi-pornographic ad campaigns are over, too.