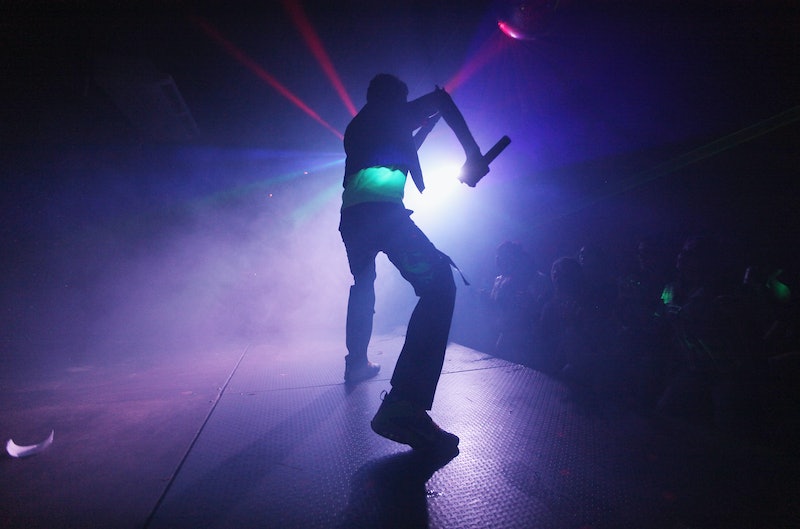 Have you ever let music completely take over? That inescapable, indescribable feeling of total separation from everything but the pulsing, thriving beat? No. You haven't. Or at least not as much as the 16-year old that lost most of his pinkie at a London rave and kept on dancing.

Straight off of an episode of Skins , "Josh" was partying in an abandoned Royal Mail office in South London when he attempted to save everyone's night, losing his pinkie in the process. He recounted his heroism to Vice :

Well, at about 1AM we were up in the house room, but I don't really like house so I was waiting for the drum 'n' bass to kick in. As soon as I heard it, me and my mate went down there. Five minutes in, the fire alarm starting going off and everyone was like, "Rip it off! Rip it off!" So I thought I'd give it a go. I was completely sober at the time. I jumped up, grabbed it and my little finger got caught in the case because it was all broken, and as I came to rip it back down, my little finger got ripped off completely.

Completely sober, huh? Interesting. So what does one do after they get their pinkie ripped off by an alarm? Keep skanking, that's what.

I looked at my hand, and my little finger was gone—the bone was sticking out. It’s the weirdest feeling; one second you’re fine and your little finger is there, and the next second it’s gone. It shoves reality up your backside. I was in so much pain and shock that the first thing that hit my head was the beat and the bass. The bass was hard, so I just ripped off my top, wrapped it around my finger and tied it up as tight as I could and skanked it out for half an hour. My mentality was, I’ve only been here for an hour, I’ve paid £10 [$17] for this night, I’ve lost my little finger—am I seriously going to go? Nah, I’m going to skank until I can’t skank anymore. After that, my mate dragged me down to the paramedics.

Slow clap, Josh. Like, I know Rihanna said "please don't stop the music," but I really think you've taken it to a new level. You're right, you paid $17, and dammit if you're not going to get that value out of it, pinkie or no. The rave, which was attended by 1,300 people, was heavily monitored by police after they made unsuccessful attempts to shut it down completely. The next day it was reported that several people were taken to the hospital with illness or injury. Unfortunately, 15-year old Rio Andrew passed away from what police have suggested are drug-related causes.